The vertical rise and fall of the tides, created by the gravitational force of the Moon and Sun acting on the oceans water, also creates a horizontal motion of the water in the bays, harbors and estuaries. These are tidal currents. The tidal range of a particular location is dependent less on it position north/south of the equator than on other physical factors in the area; topography, water depth, shoreline configuration, size of the ocean basin, and others [1].  For more information on Tides and Shallow Subtidal Environments, see this page.

Shorelines that are influenced by strong daily tidal currents are called tidal mudflat depositional environments. Tides are currents that are the result of the gravitational forces exerted by the moon and the rotation of the earth. Shorelines that have strong tidal currents as well as seafloors with low gradients can have large areas that are submerged during high tide and exposed to air during low tide. These areas often have smaller particles than a normal shoreline since the tidal currents can pull marine sediments into the area. In addition, the strong bidirectional currents, daily drying out, exposure to the elements, and abundant life create abundant indicators of these environments [4].

Mudflats (tidal flats) are areas in which coastline shores are separated from the destructive forces of the ocean’s waves. [2]. Tidal flats, also known as mudflats, are flooded at high tide and exposed at low tide [3]. Characteristics of Transport and Deposition

Figure 2 shows a cross section of the tidal flat environment and the lateral relationship of grain size. As shown in the figure, large sized grains are found seaward and there is a fining in grain size as you move inland. The King Sound area shows a change from sand to sand/mud to mud. 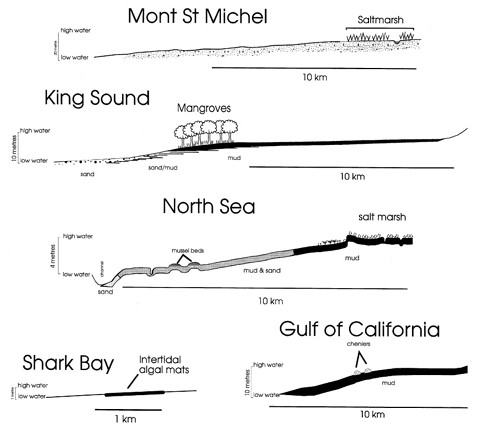 Figure 3: The lateral relationship of depositional environments from the ocean (top left) to inland salt ponds and swamps (bottom right)

Fine sediment is brought in during high tide and deposited as the tide turns. Tidal flats also have high deposition rates [3].

Common grain size of sediment in tidal flats is silt and clay [6]. Tidal flats may be muddy, sandy, gravelly, or covered in shell pavements, and compositionally they may be underlain by siliciclastic or carbonate sediments. The sediments commonly contain both siliciclastic and carbonate particles [8].

Mudflats form when silt and mud are brought in by seas, oceans, and tributaries. The mud and the silt are deposited into bays and lagoons when the tide comes in. The water mixes with the mud and silt, creating the muddy quicksand that occurs in mudflats. Once the tide lowers, the mudflats are exposed along with what inhabits them [7].

During the event of a high tide, sea water level rises to engulf the entire area bringing in nutrients from the oceans. As the sea water extracts during the low tide, a vast amount of nutrient is left behind making the mudflat a rich feeding ground for a plethora of organisms that it hosts. The abundance of nutrients make mudflats one of the world’s most productive ecosystems, and as such, produces one of the most diversified range of living organisms. [2] The rich ecosystem provided by the tidal flats makes the area very active and will commonly contain evidence of bioturbation [3].

Figure 4: An example of bioturbation in a rock (the lighter tube-like features)

Root structures can also be present in tidal flats [8]. Mudcracks  form when a shallow body of water (e.g., a tidal flat or pond or even a puddle), into which muddy sediments have been deposited, dries up and cracks. This happens because the clay in the upper mud layer tends to shrink on drying, and so it cracks because it occupies less space when it is dry. [source] Figure 6: An example of mudcracks

Muddrapes: During slack tides (low or especially high), fine grained sediment can fall out of suspension draping tidal bedforms with mud. Because mud is cohesive, it does not necessarily erode during the next tidal flow, particularly in the separation zone where flow is slow, e.g. at the bases of ripples and dunes. [source]

As the land slopes down on the side of the island facing the mainland, the low-lying areas transition into a salt marsh or mud flat habitat, which is protected from wave action, but is influenced by tidal changes. The mud flats are colonized by grasses, which slow down the movement of water and lead to increased sediment deposition, building up the land in the marsh. Different species of grasses eventually dominate the different elevations of the salt marsh, depending on their tolerance for submersion in seawater. These salt marshes are very important habitats for many invertebrates, birds, and juvenile fish. [5] 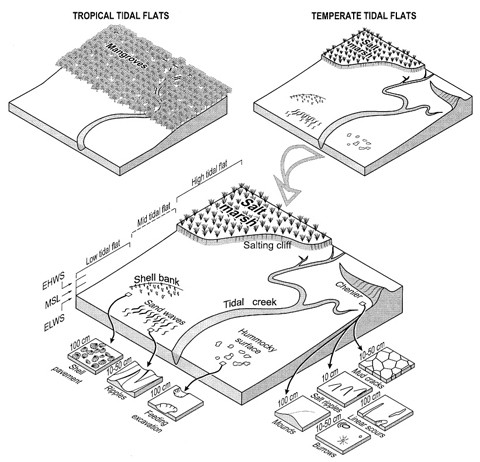 For stratigraphers and students of sedimentary rocks, identifying tidal flats in the geologic record is often an important step in the reconstruction of paleoenvironments, the location of facies associated with coastlines, and the recognition of such markers in stratigraphic sequences in basin analyses [8]. 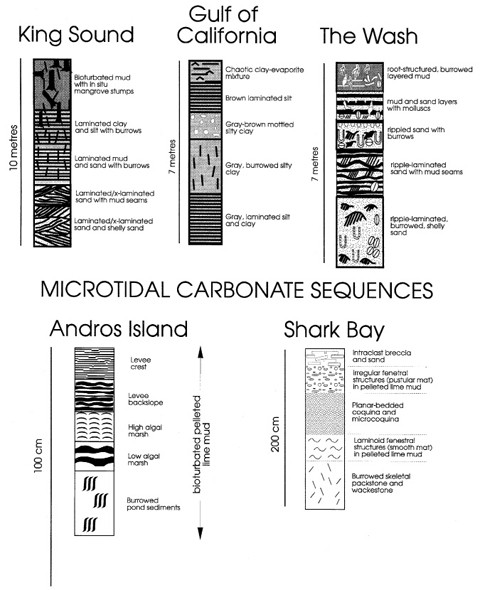 Figure 9: An example of stratigraphic columns in tidal flat environments.