Fractures propagate by three different modes. Mode I fractures are gaps opening under extension, propagating as tension acts on all sides of a growing crack. These fractures are most often found near the surface, where overburden pressure is low enough to allow them to form. Fissures, as well as most joints, form by fracture mode I. 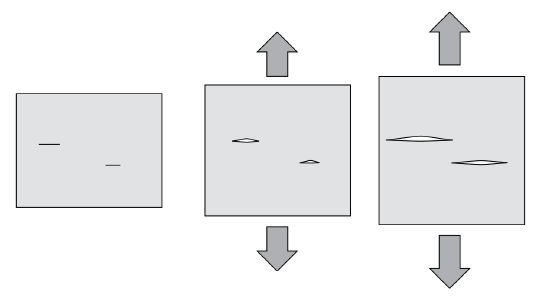 Joints formed by mode I propagation often have distinctive features on the broken surface. Radiating fractures, hackle marks, on the fracture surface form plumose structures. The orientation of these features suggests the path of crack growth. Where crack propagation has paused and then resumed, ridges called ripple marks may form.

Tension gashes are en echelon tension fractures, opened by fracture mode I, preserved by infilling with precipitated minerals. Tension gashes begin to open at the tips of propagating shear cracks, accomplishing relative shear across the incipient shear plane as they grow. As shearing continues and begins to localize, the central portions of the tension gashes rotate, forming S- or Z- shapes depending on the sense of shear. As the initial set of gashes rotates away from the original orientation, new sets of gashes may open to continue accommodating shear. Earthquakes begin as shear slip on a nucleation zone. This leads to a progressively growing failure of the fault plane analogous to a growing crack, often propagating as a mixture of fracture modes II and III. At depth, the rupture front speeds ahead, propagating primarily in mode II. Upward ropagation of the rupture front by mode III fracture occurs more slowly due to weaker rocks and lower confining stresses higher in the crust. In the very near surface, stress conditions sometimes result in expression of the crack as a series of en echelon tension fractures, opened by fracture mode I.

The strength of rocks — their resistance to fracture — is determined by their flaws, with the weakest elements always failing first. In all real materials, including rocks, these weaknesses take the form of microcracks: theoretical flaws which render materials much weaker than predicted from atomic bonding energies. Both mode II and mode III fractures form by opening and joining of microcracks by mode I fracture ahead of the main crack tip, where stresses concentrate and cause the crack to lengthen. The force required to do this is much less than for breaking flawless rock. Cracks lengthen and get weaker as they grow to become faults, causing faulting to localize with progressive deformation. Flaws are also important in plastic deformation, where flow occurs by the creation and movement of flaws in crystal lattices.