How do you define a lake? Perhaps the best way of defining a lake is that it’s a body of water surrounded by land with no connection to the oceans. Here are some comments on this definition:

• It excludes all the oceans.

• Some bodies of water that are called seas are thus lakes; examples are the Caspian Sea and the Dead Sea.

• The salinity of the lake water is not part of the definition. But in this chapter, I’ll deal only with fresh-water lakes.

The Origin of Lakes

Although the origin of lakes is not really a part of this course, here are some comments that might be of interest to you. Lakes originate in a variety of ways:

• subsidence of land below the groundwater table (Figure 4-1A).

• isolation of a part of the ocean, either by local constructive processes of sediment deposition or by crustal uplift (Figure 4-1B).

• glacial erosion and deposition on the continents (Figure 4-1C).

• Some large lakes caused by isolation of an arm of the ocean are called “seas”, although they really are lakes. If you could somehow close the Mediterranean Sea at the Strait of Gibraltar, it would be a lake—and in recent geologic times it’s widely believed that it once was closed to form a gigantic lake, which at one point might actually have evaporated to dryness!

• Lakes of glacial origin are very important in the northern part of the North American continent nowadays, because of the extensive glaciation in recent geological times. 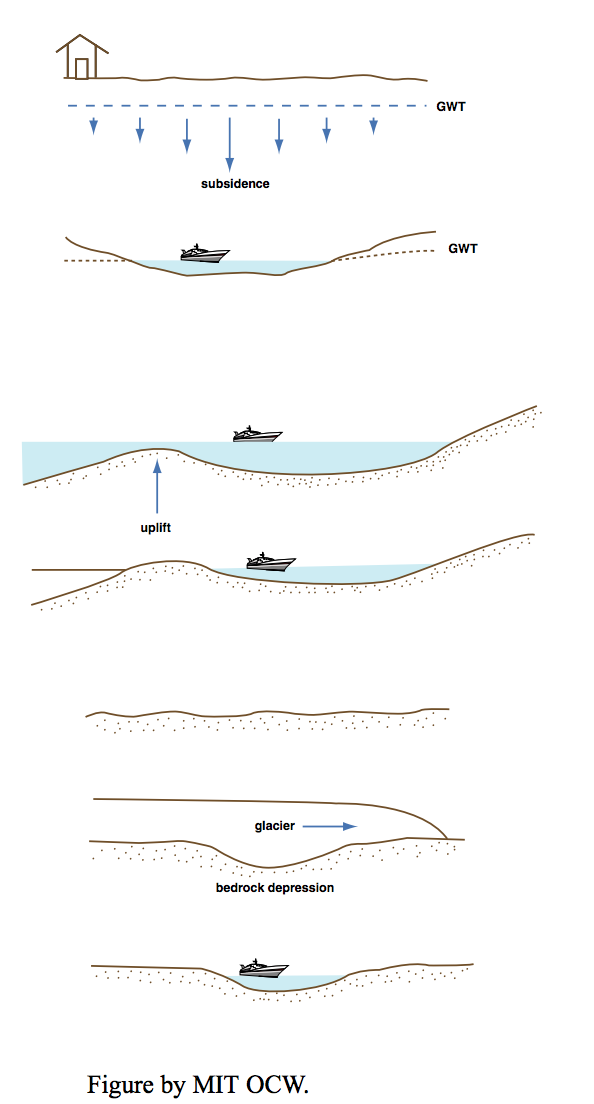 The study of lakes is called limnology. Limnology has several important aspects:

Study of the water circulation, especially of large lakes, is based on the same principles as in the oceans, and tends to be practiced by the same set of specialists as in oceanography. The bottom sediments are studied by much the same techniques as the bottom sediment of the oceans. In this chapter I’ll consider only the first two items on the above list.