Crustal earthquakes start at depths of five to twelve miles, typically in that layer of the Earth’s crust that is strongest due to burial pressure, just above the brittle-ductile transition, the depth below which temperature weakening starts to take effect (Figure 2-1). Slab earthquakes like the Nisqually Earthquake of 2001 start in the Juan de Fuca Plate underlying the continent, at greater depths but still in brittle rock. These depths are too great for us to study the source areas of earthquakes directly by deep drilling, and so we have to base our understanding of indirect evidence. We do this by studying the detailed properties of seismic waves that pass through these crustal layers, or by subjecting rocks to laboratory tests at temperatures and pressures expected at those depths. And some ancient fault zones have been uplifted and eroded in the millions of years since faulting took place, allowing us to observe them directly at the surface and make inferences on how ancient earthquakes may have occurred on them.

An earthquake is most likely to rupture the crust where it previously has been broken at a fault because a fault zone tends to be weaker than unfaulted rock around it. The Earth’s crust is like a chain, only as strong as its weakest link. The strain has been building up elastically, and now the strength of the faulted crust directly above the zone where temperature weakening occurs is reached. Suddenly, this strong layer fails, and the rupture races sideways and upward toward the surface, breaking the weaker layers above it, and even down into the crust that would normally behave in a ductile manner. The motion in the brittle crust produces friction, which generates heat that may be sufficient to melt the rock in places. In cases where the rupture only extends for a mile or so, the earthquake is a relatively minor one, like the 1993 Scotts Mills Earthquake east of Salem, Oregon. But in rare instances, the rupture keeps going for hundreds of miles, and a great earthquake like the 1906 San Francisco Earthquake or the 2002 Denali, Alaska, Earthquake is the result. At present, scientists can’t say why one earthquake stops after only a small segment of a fault ruptures, but another segment of fault ruptures for hundreds of miles, generating a giant earthquake. 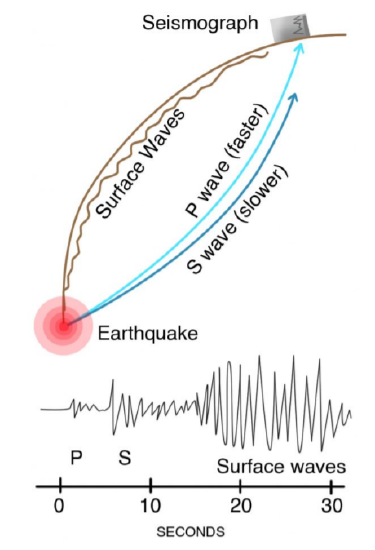 The rupture causes the sudden loss of strain energy that the rock had built up over hundreds of years, equivalent to the snap of the board or the pop of the balloon. The shock radiates out from the rupture as seismic waves, which travel to the surface and produce the shaking we experience in an earthquake (Figure 3-11). These waves are of three basic types: P waves (primary waves), S waves (secondary or shear waves), and surface waves. P and S waves are called body waves because they pass directly through the Earth, whereas surface waves travel along the Earth’s surface, like the ripples in a pond when a stone is thrown into it.

P and S waves are fundamentally different (Figure 3-12). A P wave is easily understood by a pool player, who “breaks” a set of pool balls arranged in a tight triangle, all touching. When the cue ball hits the other balls, the energy of striking momentarily compresses the next ball elastically. The compression is transferred to the next ball, then to the next, until the entire set of pool balls scatters around the table. The elastic deformation is parallel to the direction the wave is traveling, as shown by the top diagram in Figure 3-12. P waves pass through a solid, like rock, and they can also pass through water or air. When earthquake waves pass through air, sometimes they produce noises.

An S wave can be imagined by tying one end of a rope to a tree. Hold the rope tight and shake it rapidly from side to side. You can see what looks like waves running down the rope toward the tree, distorting the shape of the rope. In the same fashion, when S waves pass through rock, they distort its shape. The elastic deformation is at right angles to the direction the wave travels, as shown by the bottom diagram in Figure 3-12. S waves cannot pass through liquid or air, and they would not be felt aboard a ship at sea.

Because S waves are produced by sideways motion, they are slower than P waves, and the seismologist uses this fact to tell how far it is from the seismograph to the earthquake (Figure 3-13). The seismogram records the P wave first, then the S wave. If the seismologist knows the speed of each wave, then by knowing that both waves started at the same time, it is possible to work out how far the earthquake waves have traveled to reach the seismograph. If we can determine the distance of the same earthquake from several different seismograph stations, we are able to locate the epicenter, which is the point on the Earth’s surface directly above the earthquake focus. The focus or hypocenter is the point beneath the Earth’s surface where the crust or mantle first ruptures to cause an earthquake (Figure 3-4). The depth of the earthquake below the surface is called its focal depth. An earthquake releases a complex array of waves, with great variation in frequency, which is the number of waves to pass a point in a second. A guitar string vibrates many times per second, but it takes successive ocean waves many seconds to reach a waiting surfer. The ocean wave has a low frequency, and the guitar string vibrates at a high frequency. An earthquake can be compared to a symphony orchestra, with cellos, bassoons, and bass drums producing sound waves that vibrate at low frequencies, and piccolos, flutes, and violins that vibrate at high frequencies. It is only by use of high-speed computers that a seismologist can separate out the complex vibrations produced by an earthquake and begin to read and understand the music of the spheres. To explain this, I return to my piece of Silly Putty (Figure 3-2). Silly Putty can be stretched out like bubble gum when it is pulled slowly. Hang a piece of Silly Putty over the side of a table, and it will slowly drip to the floor under its own weight, like soft tar (ductile flow). Yet it has another, seemingly contradictory, a property when it is deformed rapidly. It will bounce like a ball, indicating that it can be elastic. If Silly Putty is stretched out suddenly, it will break, sometimes into several pieces (brittle fracture).

The difference is whether the strain is applied suddenly or slowly. When strain is applied quickly, Silly Putty will absorb strain elastically (it will bounce), or it will shatter, depending on whether the strain takes it past its breaking point. Earthquake waves deform rock very quickly, and like Silly Putty, the rock behaves like an elastic solid. If strain is applied slowly, Silly Putty flows, almost like tar. This is the way the asthenosphere and lower crust work. The internal currents that drive the motion of plate tectonics are extremely slow, inches per year or less, and at those slow rates, rock flows.

Furthermore, when a fault ruptures the brittle crust just above the brittle-ductile transition, the fault rupture may propagate downward into the crust that behaves in a brittle fashion because the fault rupture is generated at high speed, in contrast to its response to the slow deformation of plate tectonics. We will return to this subject in Chapter 4, where we consider the behavior of the Cascadia Subduction Zone, in which the plate boundary consists of material closer to the surface that is elastic or subject to brittle fracture under all conditions, a deeper layer that is ductile under all conditions, and an intermediate, or transitional, layer that is ductile when stress is applied slowly, at the rates of plate tectonics, but is brittle when stress is applied rapidly as an earthquake-generating fault propagates downward. But even the deepest layer is elastic to the propagation of seismic body waves.