Table 2.2: Unified Soils and Wentworth classifications of sediments on the basis of size. ASTM mesh refers to the ASTM standard for sieve aperture sizes and \(D_n\) is the nominal diameter. For definition of the \(\varphi\)-scale, see Sect. 6.2.2. 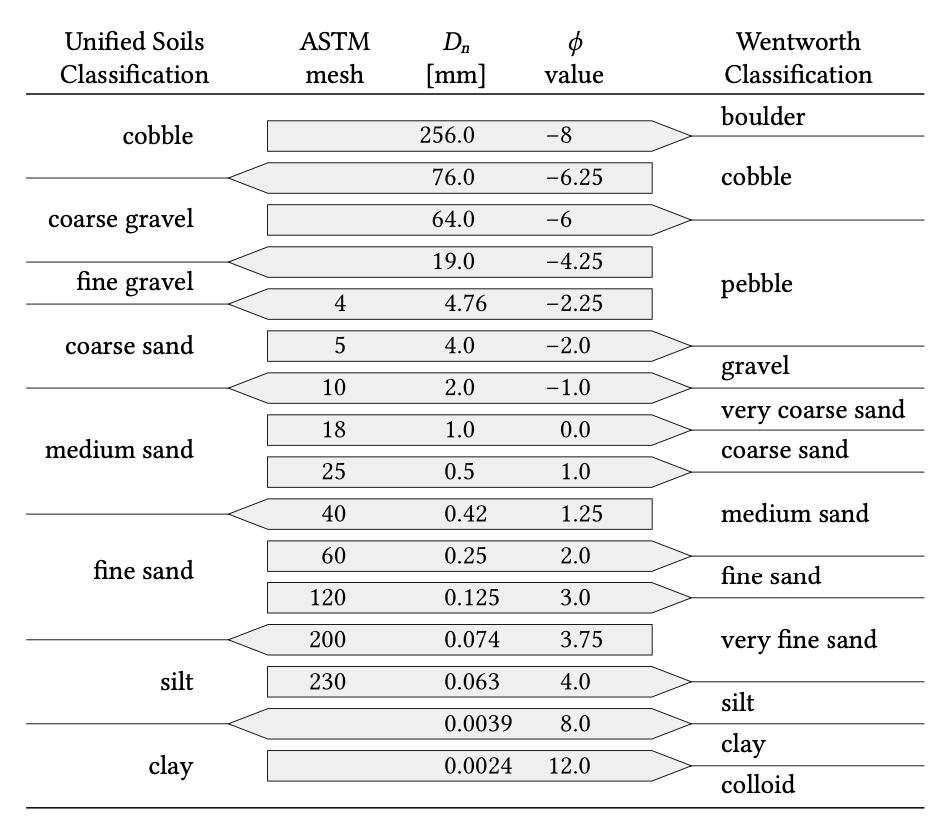 According to this classification, sand is defined as grains with a size between 63 \(\mu m\) (lower limit very fine sand) and 2 mm (upper limit very coarse sand). Sand-sized material consists mostly of quartz or carbonate and is the most abundant coastal material. Sand is a non-cohesive material; the individual near-spherical grains do not stick together and are very resilient. Material with a grain size smaller than 63 \(\mu m\) can be defined as either clay or silt. While silts tend to have larger particle sizes than clays, silts and clays are mineralogically and chemically quite distinct, see Intermezzo 2.3.

Intermezzo 2.3 Properties of silt and clay

Silts are soils with fine nearly spherical grains that do not include clay minerals. Mineralogically, silt is composed of quartz and feldspar. Clay on the other hand mainly consists of clay minerals that originate from weathering of feldspar. Chemically, clay minerals are layered metal silicates: thin plate-shaped particles held together by electrostatic forces (Figs. 2.27 and 2.28). Hence, clays have strong cohesive properties.

When the distance between particles is small enough, they can become stuck in a ‘card-house’ structure. This process, called flocculation, is enhanced by ionic constituents present in saline environments and the presence of organic material.

Often both silt and clay particles are found together. A fluid-sediment mixture of (salt) water, silt, clay and organic materials is named mud. Also some very fine sand may be present in mud.

Based on the size of the beach material, the world’s beaches can be classified as muddy coasts, sandy coasts or gravel/shingle coasts. The main focus of these lecture notes is on sandy coasts, although the finer sediments of muddy coasts are also considered.