Coastal erosion is the loss or displacement of coastal lands and the subsequent landward retreat of the shoreline caused by the net removal of sediments or the underlying bedrock. There are two types of coastal erosion; rapid-onset hazard erosion occurs at a time scale of days to weeks, whereas slow-onset hazard erosion occurs at a time scale of decades to centuries. Both of these are caused by natural processes. For slow-onset hazards, common drivers of erosion include waves, currents, and mass wasting processes- which is the bulk movement of sediments and rock debris down slopes largely in response to gravity. Wind erosion also contributes to slow-onset hazards and is responsible for many of the horizontal and cross-bedding strata that are visible in some sand dunes and beaches. Subsidence, the gradual settling or sudden sinking of the Earth’s surface, is another cause of slow-onset hazard erosion. The significant episodes of coastal erosion associated with rapid-onset hazards are often driven by extreme weather phenomena. An event such as a tsunami has an increased wave intensity that can flood and erode landforms that are not typically reached by normal coastal waves. 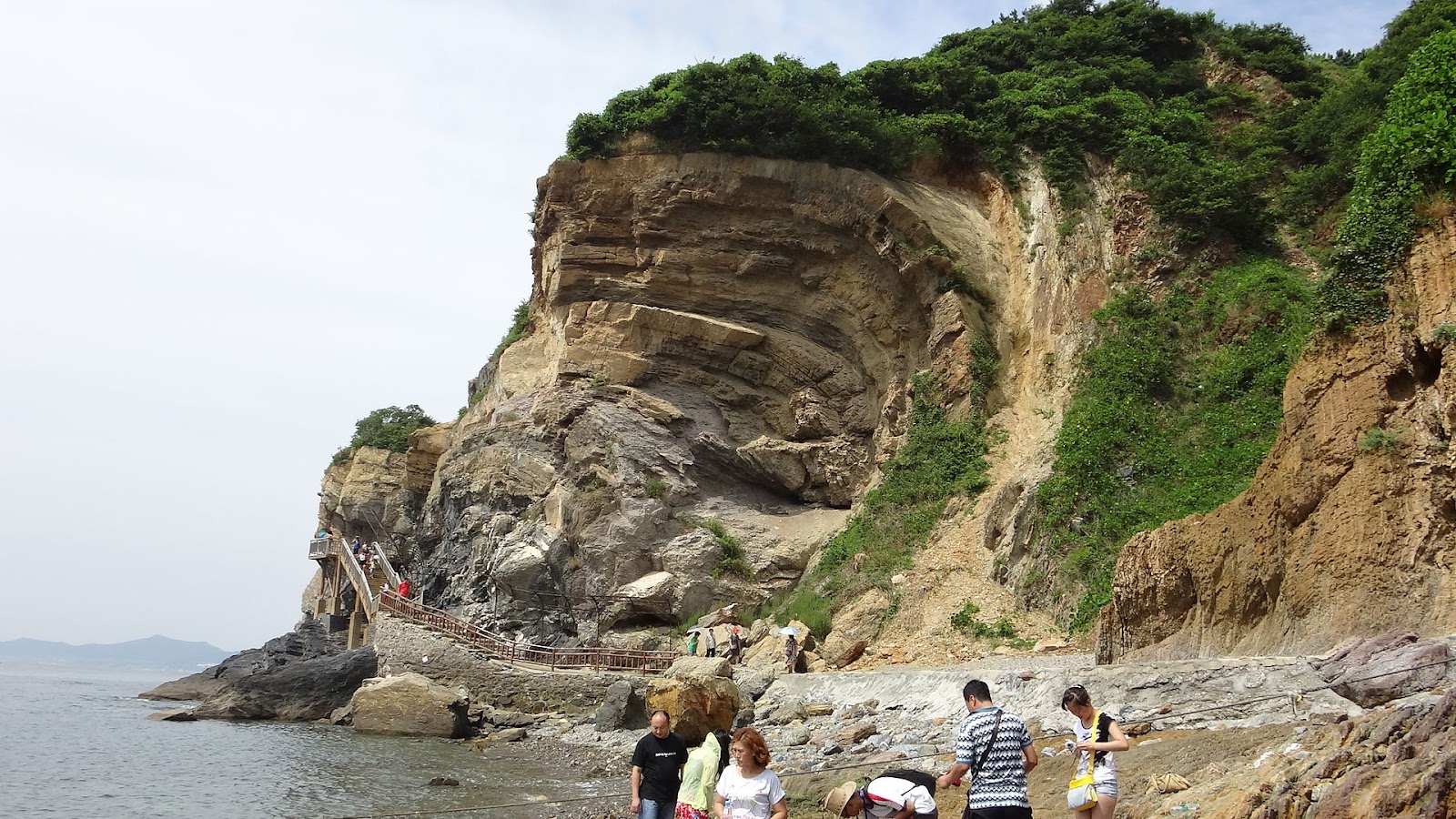 Beyond the natural drivers of coastal erosion, anthropogenic activities also have a strong influence. Construction of coastal structures often removes important sediments, as do processes like dredging and sand mining. Sediment supplies are also reduced through the damming of inflowing rivers, thus the coast on the opposite side of the dam is more susceptible to coastal erosion. On a global scale, climate change can lead to an increase in temperatures and heating. This has the opportunity to raise sea levels and create more intense winds and currents that increase coastal erosion rates.

Two primary solutions have been proposed to protect existing coastal developments from erosion: hard and soft coastal stabilization or reinforcement. Hard reinforcement refers to the construction of semi-permanent structures such as seawalls or groins, designed to trap sediments carried by long shore current and prevent further erosion of the location. However, hard reinforcement only acts as a temporary solution for coastal erosion. While seawalls and groins provide short-term benefits in the areas they are implemented, additional reinforcements are necessary to prevent further erosion downdrift.

Soft reinforcement attempts to maintain the current shoreline by imitating conditions that are naturally occurring. Examples of soft reinforcement include beach nourishment and dune stabilization, which requires transportation of sediments from elsewhere to support the coastline. Practices include bulldozing sediments from further down the beach or dredging to restore coastline. Drawbacks to this kind of reinforcement is that it is not recommended for high energy environments and is extremely costly to operate. Nature is dynamic and coastlines will continue to evolve, especially with the current coastal conditions. In many cases, the most effective approach to erosional shorelines may be to relocate or avoid building in these environments altogether.

Sea cliff erosion stems from erosion at the cliff base and leads to sloughing off of sea cliff material due to the increase in slope angle and shear strength. This debris then collects at the cliff base. This new debris temporarily halts the erosion of the coast until it is finally eroded away. Many different processes play a role in erosion. The dominant erosive process is dependent on the dynamics of the water system and the composition of the shore material. Corrosion affects rocks like limestone and calcium carbonates. Sea spray and wave splash, aided by rainwater and acidophiles, work to break down the rock. Attrition is the bombardment and scraping of particles against one another, and through this particle sizes decrease. Corrasion then takes over and rolls rocks and particles over each other by wave-aided action. Hydraulic action is the final major erosional process, which is erosion caused by the force of the water body. The shock wave pressure breaks rocks free from their origin and pulls them toward the water. 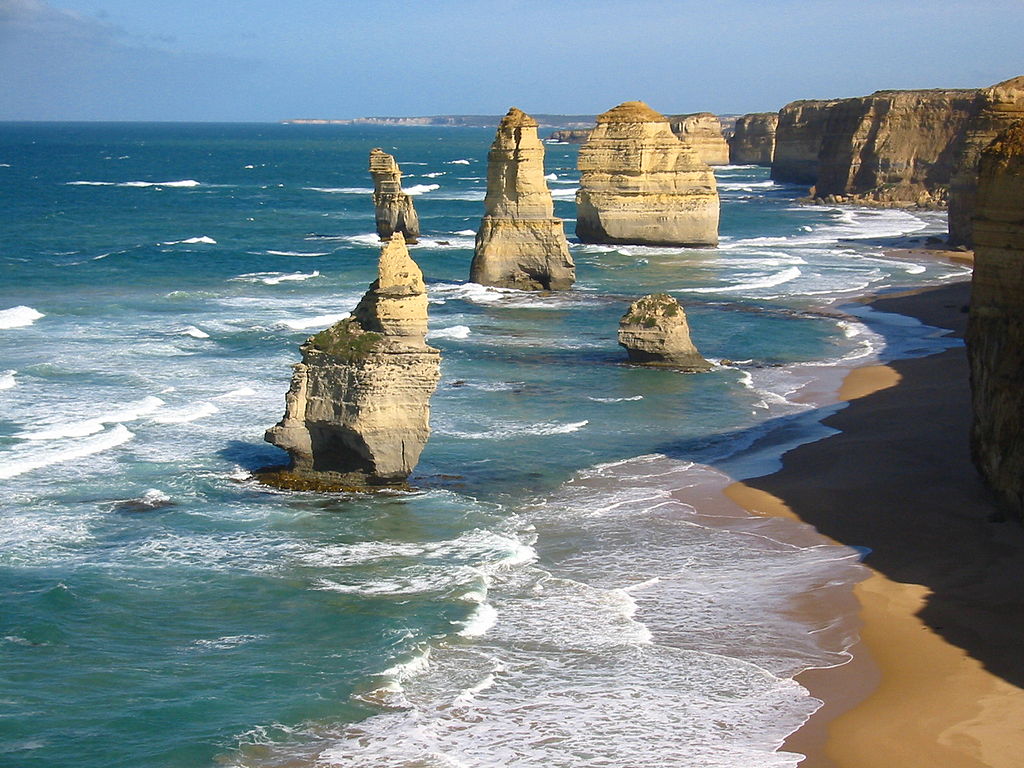 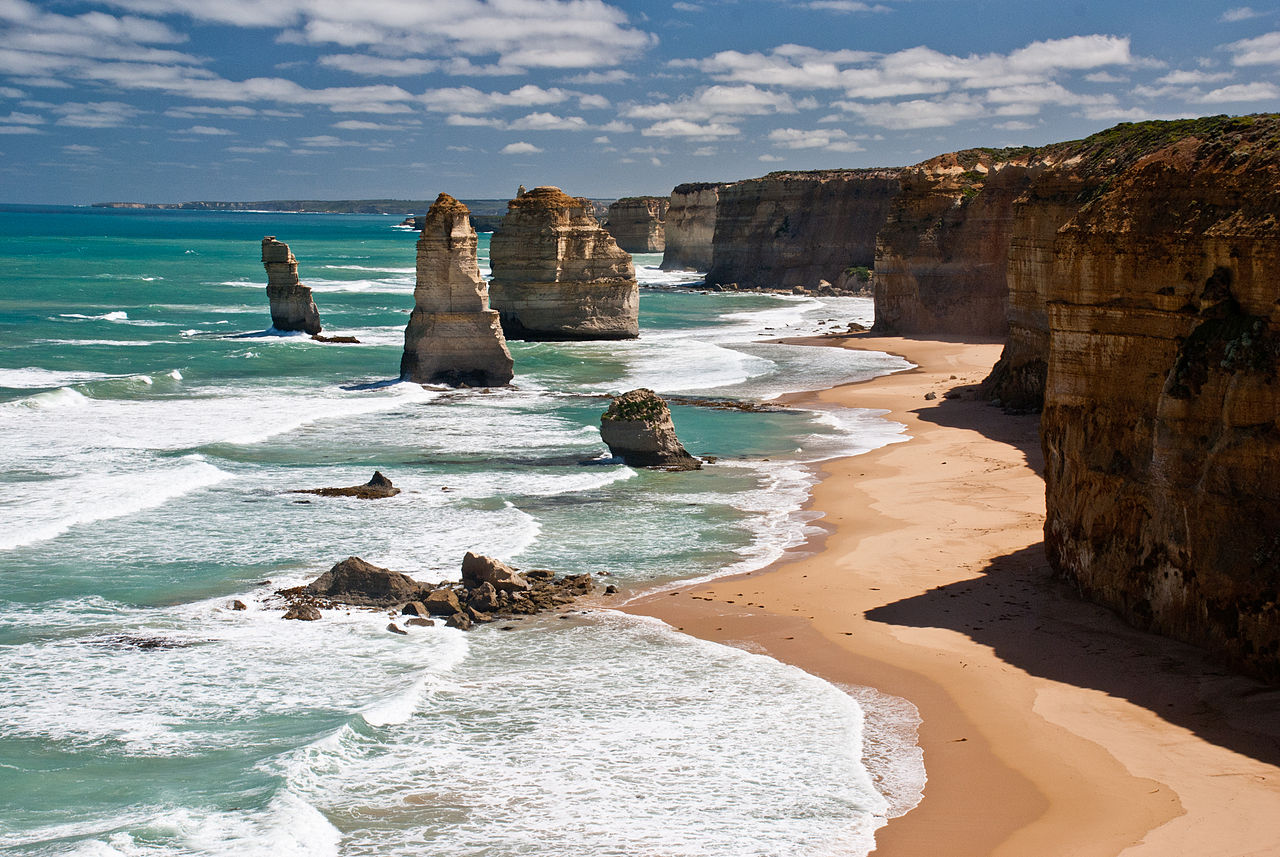 Sea caves or littoral caves are formed when less resistant rocks are subjected to corrosion or scouring, and then caves are formed in the eroded niches. With enough erosion through the headland, sea caves can grow and extend into sea arches. Featured above are The Twelve Apostl.es in Australia. The image on top was taken before the 2010 collapse, while the one below that was taken after. (https://upload.wikimedia.org)

Common landforms of erosional coastlines include stacks, sea caves, and sea arches. Sea stacks form as water attacks the coast and manages to cut away isolated forms. The process of wave refraction around the headland reach works to separate the structure from the main body. They can also be created by erosion from wind and rain. These are The Twelve Apostles in Australia.

Coastal erosion is accentuated more as sea levels continue to rise. Research shows that rise affects sandy beaches the most, causing them to retreat at 150 times greater than the amount of water that rises (Leatherman et al., 2011). As beaches along the coast of America change, engineering and planning practices are forced to adapt in order to keep up with a decreasing volume of sand and smaller coastal area. In addition to the beaches, structures built along coasts are at high risk because the sediments they are built above are steadily decreasing (Zhang, 2004). Overall, the increasing effects of climate change could create drastic changes upon our coasts.

While the effects of coastal erosion are increasing, potential solutions are being discovered. An exciting solution is using ecological engineering initiatives. Two examples are: using ecological species to trap sediments and damp waves, and adhering hard substrates to surface to enhance the surfaces ecological function (Borsje, 2011). These frameworks provide potentials to create symbiotic relationships between ocean organisms and geologic change.

More on Erosion: Additional sources on coastal erosion and general processes behind them: