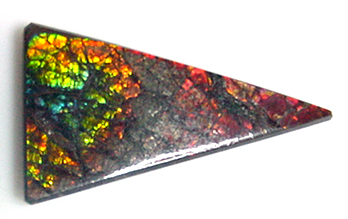 Ammolite is the iridescent gem variety of a unique fossil ammonite, currently excavated only in southern Alberta, Canada. Ammonites are an extinct marine animal that first appeared 400 million years ago and became extinct at the end of the Cretaceous Period, 65 million years ago.
Natural ammolite has a hardness of 3.5, but is most often sold as a doublet or triplet in order to protect the gem material. Natural stones are often impregnated with an epoxy as a treatment to strengthen the ammolite.
Color comes from the interference of light, and it is dependent on the thickness of the layers of aragonite. From thickest to thinnest: red, green, blue, and purple.
The color play is a result of iridescence (interference).