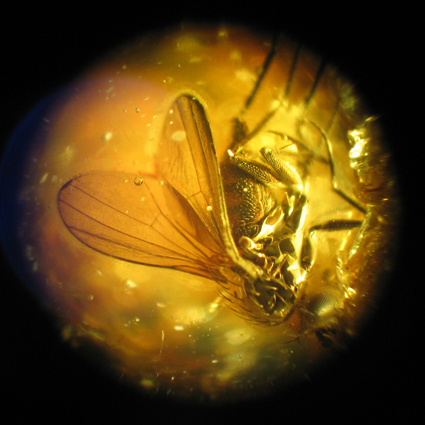 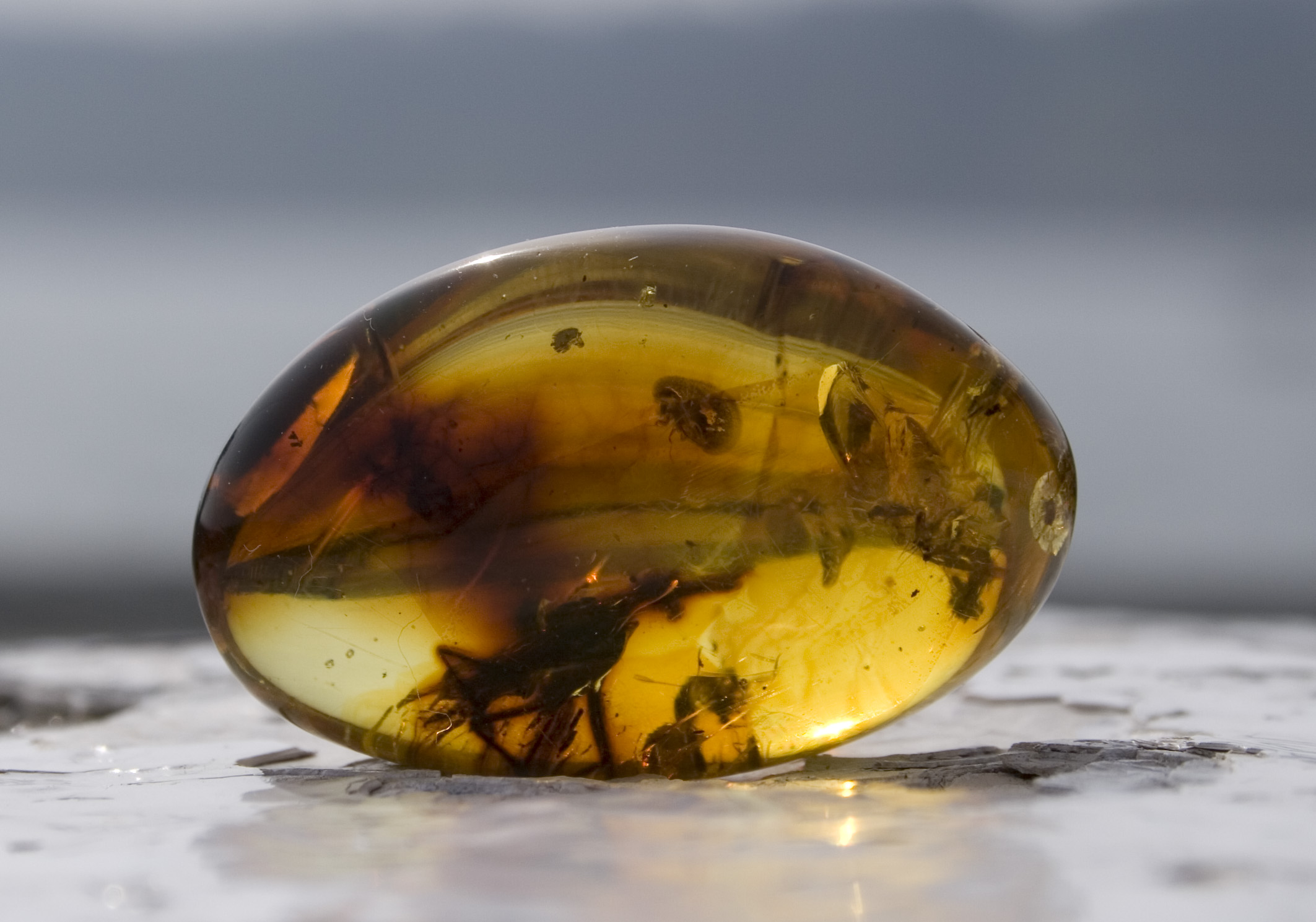 Amber is the fossil resin from a pine tree that flourished in the Baltic region (and other localities) some 25 to 60 million years ago. Globs of this aromatic sap poured down from prehistoric trees, often trapping insects, twigs, bark and leaves. Amber is one of the few gemstones of organic origin. In ancient India and Egypt, amber was burned as an incense, believed to purify the surrounding area. Amber is abundant along the shores of the Baltic Sea where it is mined extensively from Tertiary glauconite sands that are from 40 million to 60 million years old.

Amber is often very hard to separate from its imitations due to overlapping physical and optical properties. When no internal features are diagnostic, one can, usually, only fall back on destructive methods like the hot needle test and ether/acetone. 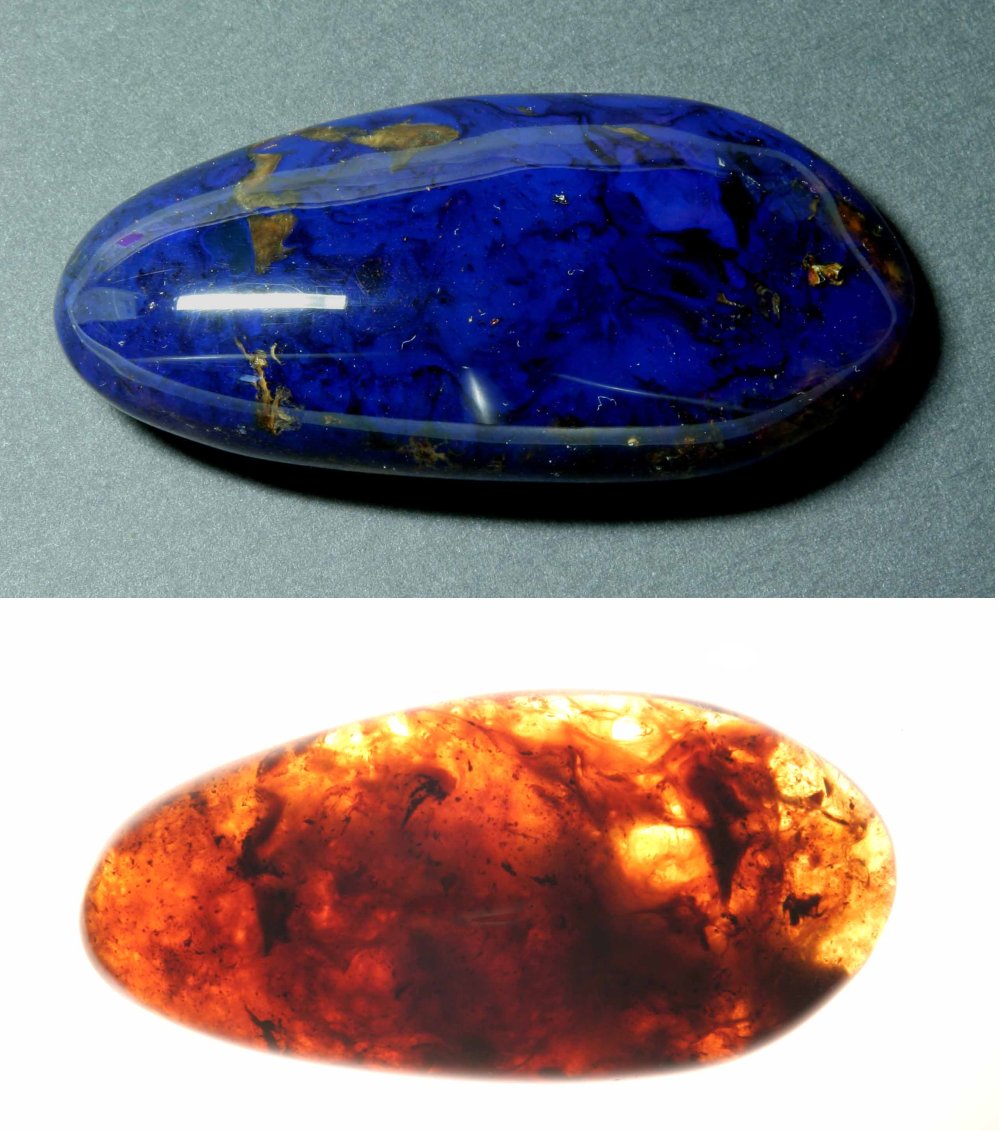 Blue and green amber is found only in the Dominican Republic. This blue (or green) color is only seen in reflected light, in transmitted light it will show a more common amber color (such as yellow, orange, red). Under UV light these blue gems give a strong cobalt blue fluorescence.
The cause of color of these blue and green gems is believed to be from fluorescence of UV and violet light from natural sunlight.

Delocalized electrons on organic molecules are the cause of the other colors.

The specific gravity varies from 1.05 to 1.09. Amber with many gas bubbles is in the lower range.
Amber floats in a saturated saline solution. This is the reason why amber is found on many shores around the Baltic Sea, it floats on sea water.
As with the refractive index, copal and some plastics fall in the same range.

When a needle is heated and then brought to a piece of amber, it will give a pine tree odor, while the plastic simulants will smell like burned plastic.

When a small drop of ether or acetone is placed on plastic or copal, it will leave a sticky surface while they have no effect on real amber.

Amber is singly refractive and will show anomalous extinction (ADR) and stress colors between crossed polarizers, as will some plastics.

(These can be mimicked in plastic)

The Greek word for amber is "electron" and "electricity" is named after this gemstone.

When rubbed with silk, amber will get a negative electric charge while glass will be positively charged.
Plastics will also be charged negatively like amber.

A lot of amber contains many gas bubbles that give it a hazy appearance. Slow heating between 150-180° C, followed by slow cooling, can diffuse these bubbles out.
When the cooling takes place too rapidly, typical leaf-like stress inclusions form (these are known as "sun spangles") and these inclusions are, more than often intentionally, mistaken for prehistoric leaf inclusions.

Another type of heating involves laying the specimens in a sand-filled iron pot and heat it over an extensive period to darken the amber. This gives it an "antiqued" look. Natural amber may darken naturally over time due to air oxidation.

One type of amber that one may encounter is reconstructed amber. This type of amber is also marketed as "ambroid".
Clear fragments of amber are carefully selected and heated up to ± 180° C under high pressure of +350 bar in a reducing atmosphere with sometimes linseed oil added. Under these conditions, the fragments fuse together and some organic dyes may be added to the process to influence the color of the resulting solid block.
These gemstones may whiten over time opposed to naturally occurring amber which will darken.

The following inclusions may be seen:

Copal is also a natural occurring fossilized resin which can also be artificially created. The resin has been buried in the earth for a considerably shorter period and its hardness is lower than that of amber.
The best way of descriminating between copal and amber is by placing a small drop of ether or acetone on the gemstone. This will create a sticky surface on copal, while it has no effect on amber. This is a destructive method though.
The fluorescence of copal is much whiter than that of amber.

Plastic is often used to imitate amber. Even complete insects and/or small animals like salamanders are embedded into the mold to mimic natural fauna inclusions.
When the hot needle test is applied to them, it will smell acrid instead of piney.

If you are offered a piece of amber with a complete salamander at low cost, there must be something wrong as they would fetch several ten-thousands of dollars when genuine.

Mexican Amber* Amber is a fossilized resin that exuded from the bark of an ancient long extinct tree. It is not the same as sap which is a nutrient for the tree rising through the heartwood. The ambers antiseptic properties protect the tree from disease and attacks from wood gnawing and burrowing insects. As it exuded as blobs or stalactites which drip or flow down the trunk or branches of the tree. the resin acted as a sticky trap entombing flora and fauna.

This amber with inclusions is a natural time capsule. The best pieces capturing a moment in time from millions of years ago. Most amber is from the Baltic region or from the Dominican Republic. Mexican amber, often also known as Chiapas amber is from Mexico's most southern state which borders Guatemala. It brings a much-needed income to some of the poorest people in Mexico. It is quite rare. The mining is very much a cottage industry. The indigenous Tzotzil Mayan tunnel and burrow into the mountainside using simple hand tools. The mining is somewhat seasonal when they are not working on the maze or coffee crop. Sometimes the production can be in total a few kilos a day.

From the latest research, it appears that Mexican amber is from the Oligocene/Miocene in age some 24-30 million years ago. This amber is natural not treated like most Baltic amber. It often has a lovely fluorescence to it and produces good natural red amber. Though it was known to the ancient Maya and traded to the Aztecs and other tribes. The Spanish conquistadors tell of the Aztec Emperor Montezuma stirring his chocolate with an amber spoon. It was first introduced to the modern world by the eminent archaeologist Franz Blom. Blom was born in 1893 in Copenhagen into a middle-class Danish family. He was restless and traveled to Mexico. He found work in the oil industry as a paymaster. Traveling to remote locations in the Mexican jungle he became interested in the Mayan ruins he encountered. He obtained a degree in archaeologist from Harvard University. He helped document many ancient Mayan archaeological sites and discovered the ancient Mayan site of Uaxatun. He was one of the foremost experts on Mayan archeology and culture. He became aware of amber deposits in the Simojovel area of Chiapas and sent samples with insect inclusions to the University of California.

This sparked off such interest that soon after in 1953 a group of scientists from California's Museum of Paleontology, Berkeley arranged with Blom to visit the amber deposits in the Simojovel area. Blom owned a large house in the Spanish colonial town of San Cristobal de las Casas. It was a cultural and artistic center. They set off with Blom in a jeep for Simojovel in the Chiapas highlands. This was something like a 60-mile journey on a dirt road that winded through the mountains. They experienced many difficulties with landslides and rock falls etc. Added to that the local indigenous were not used to outsiders and were often hostile. Despite the problems, the expedition was successful. Stratographic mapping was undertaken. Amber with inclusions was obtained. One new find was a new species of a stingless bee. The most significant collection of Mexican amber is at the University of California Museum Berkeley. It was assembled by PD Hurd Jnr and other scientists in the 1950's. My first visit to Simojovel was in 1974-75. It was still an isolated area and hard to get to.

It was Dr. George Poinar's research work into DNA in amber inclusions which gave Michael Crichton his idea for the book Jurassic Park. On the day of the film release of Jurassic Park, Dr. Poinar and his team of scientists announced that they had made a breakthrough in extracting DNA from an extinct bee in Dominican amber. This set off much interest in the inclusions in amber. I do not know why anyone would want to create a dinosaur. But it has resulted in beneficial research work into plants and insects in amber and to the development of modern species.

Copal versus amber
The distinction between Copal and amber is contentious as they both have the same chemical formula. The difference is Copal contains liquids such as oils acids and alcohol. These produce the distinct resin smell. It is often used in incense. In amber, these volatile liquids have dissipated and evaporated. The resin has then undergone a process known as polymerization. The organic molecules join to form larger ones called polymers. The molecules are cross-linked and intertwined. In Copal, only part polymerization has taken place.

The chemical formula for Copal and amber is pretty much the same. From a chemical and geological point of view, some people claim no distinction should be made between copal and amber just generally classify them as resinites or fossil resin. Other people insist they should all be called amber. From a jewelry and gemological point of view, the definition has to be on its physical properties. Copal still contains volatile liquids which evaporate thus causing it to crack and craze. Copal is not rare and it is unstable and not as hard and durable as amber.

According to Dr. George Poinar, Columbian Copal ranges in age from ten to a few hundred years old. African and Madagascan Copal are probably the same age. The oldest Copal is probably from New Zealand (better known as Kauri gum) which can be up to 40,000 years old. The inclusions in amber are of extinct insect species. In Copal they are modern species.

The best test for distinguishing amber from Copal is a drop of solvent or acetone nail polish remover. Copal will become sticky whilst it will have no effect on amber.

Conclusion
Inclusions in amber have enabled scientists to research the Earth's climatic change patterns and evolution and development of flora and fauna.

Much research has been done on inclusions in Baltic amber going back over a long period of time. Baltic amber has been almost fully researched. Even Dominican amber has been more researched than Mexican Amber probably because Mexican Amber is rare and hard to obtain. I have supplied 16 pieces of Mexican amber for research into the inclusions. One contained a new species and genus of insect which was named after me - Tonacatecutlius Gibsoni. 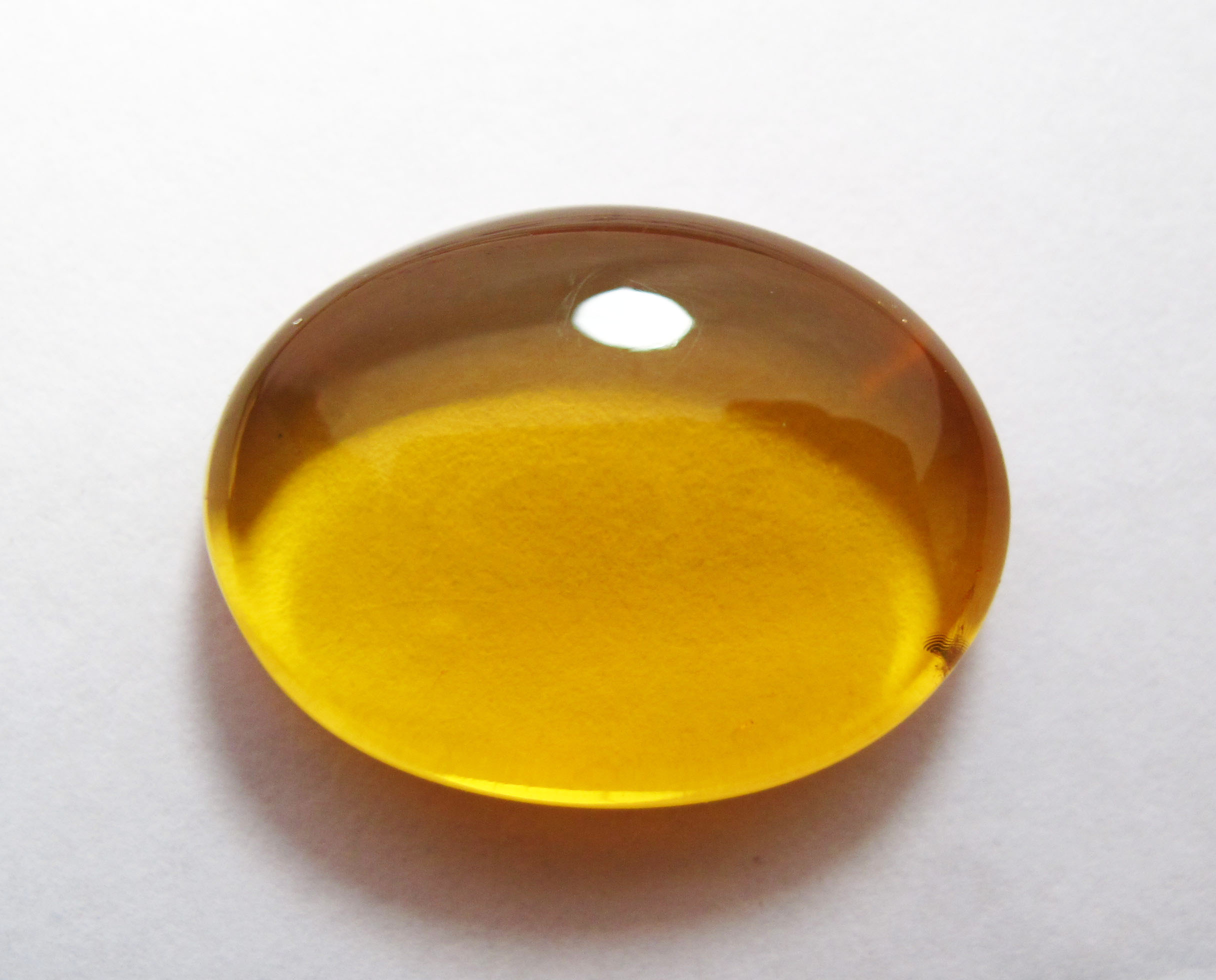 Figure \(\PageIndex{4}\): Chiapas Amber,
Very suitable for jewelry as it's hold the polished surface longer enough. Mined from the lignite deposit at the Simojovel, Chiapas, Mexico 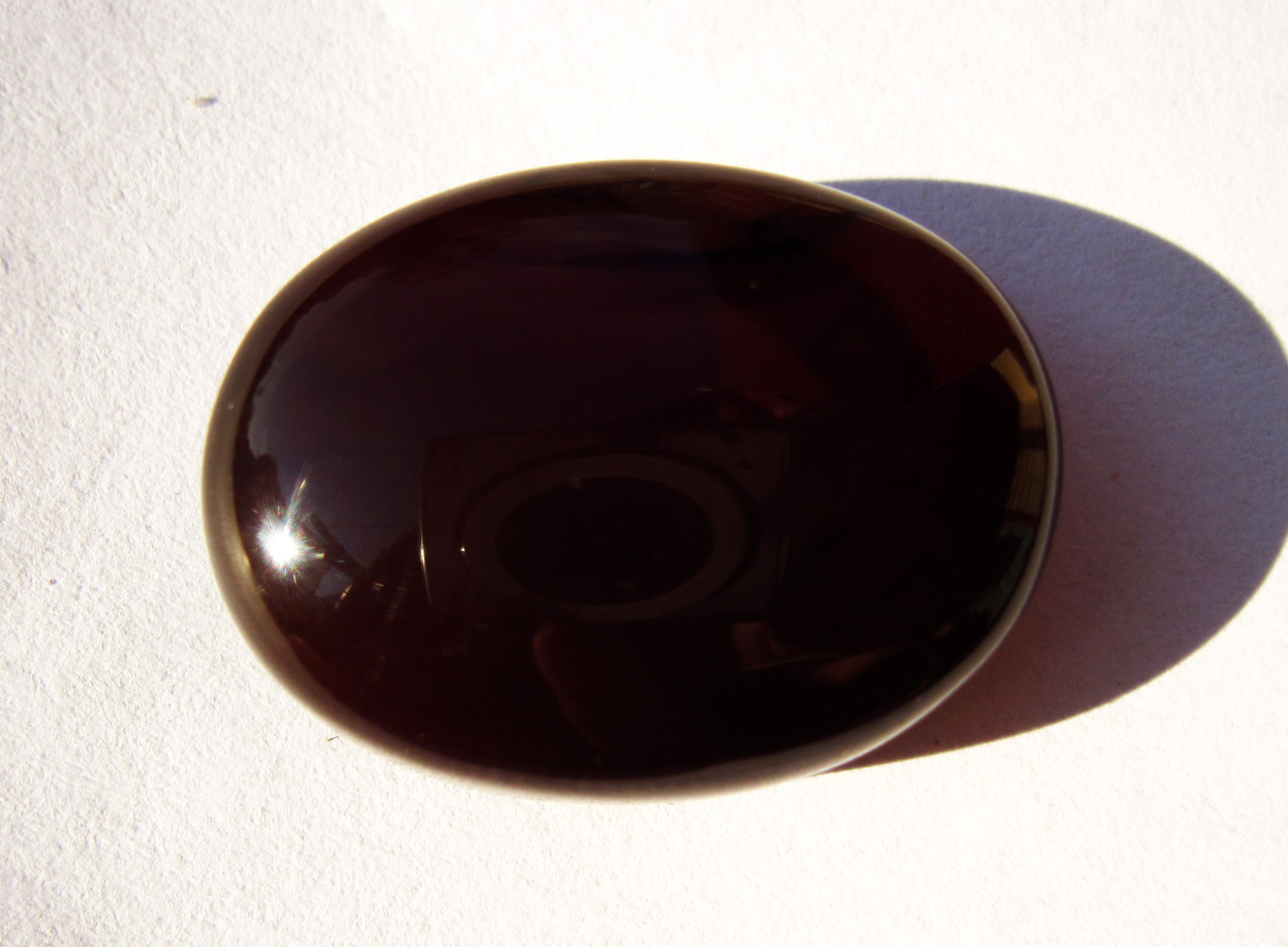 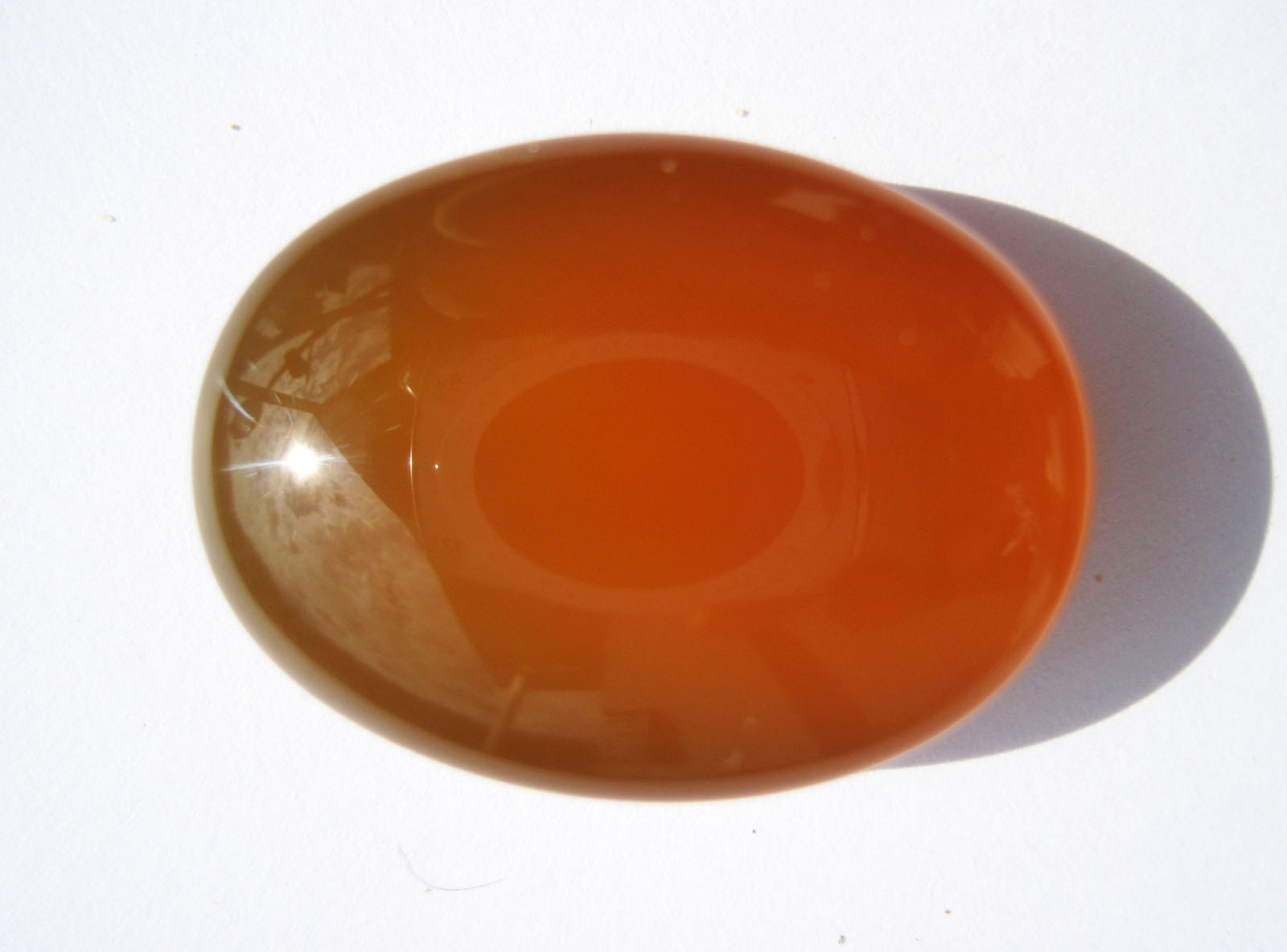 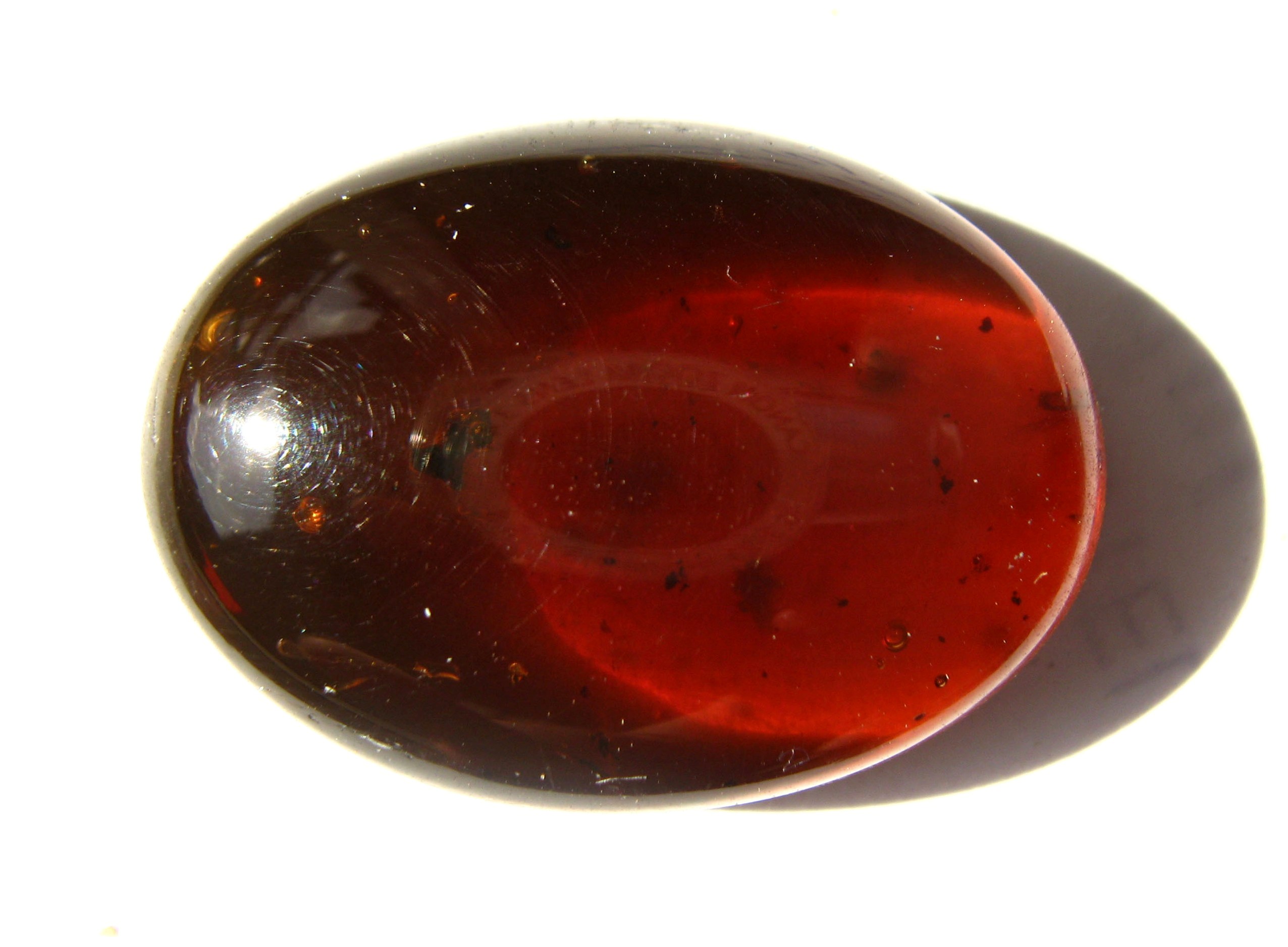 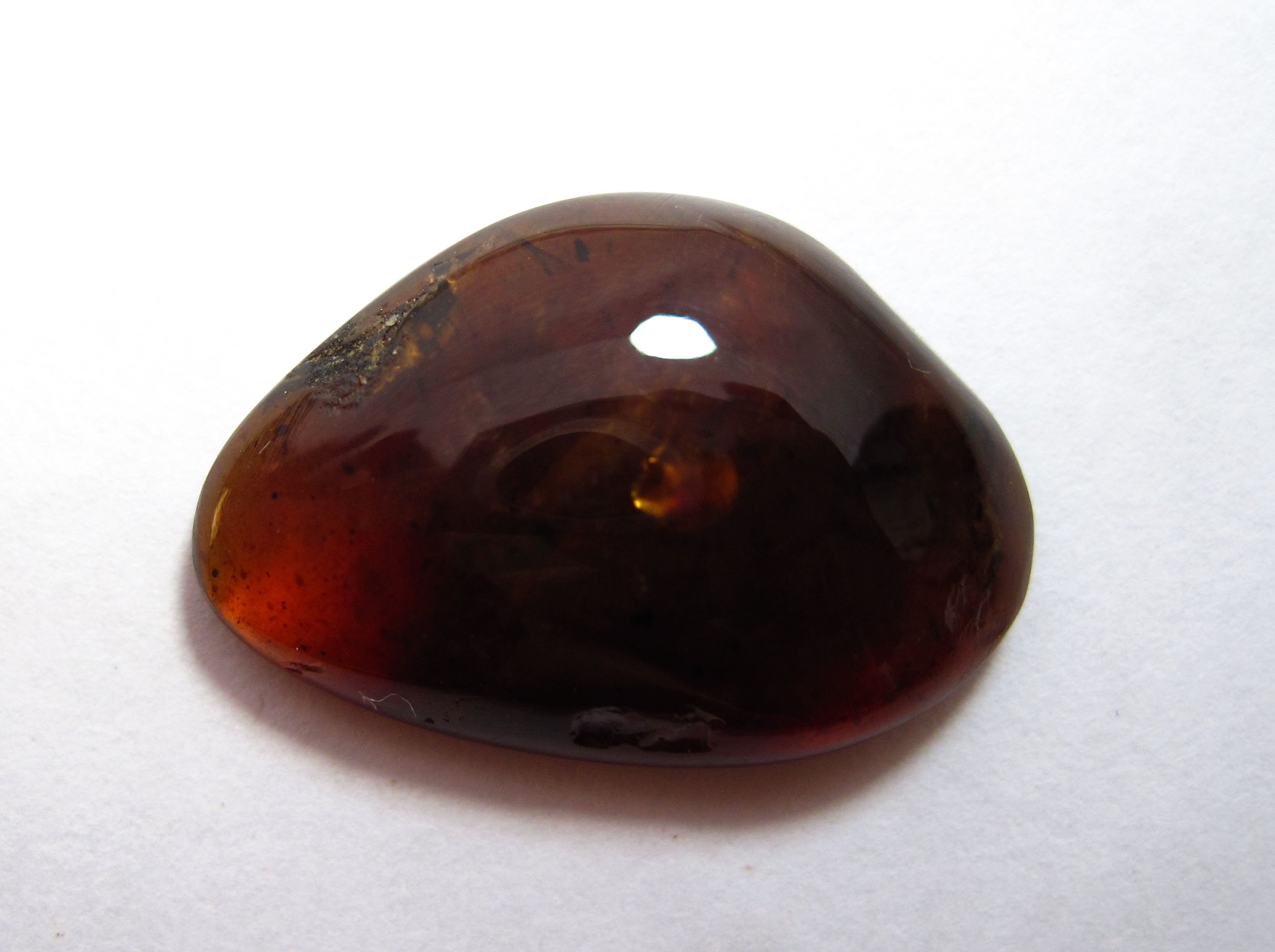 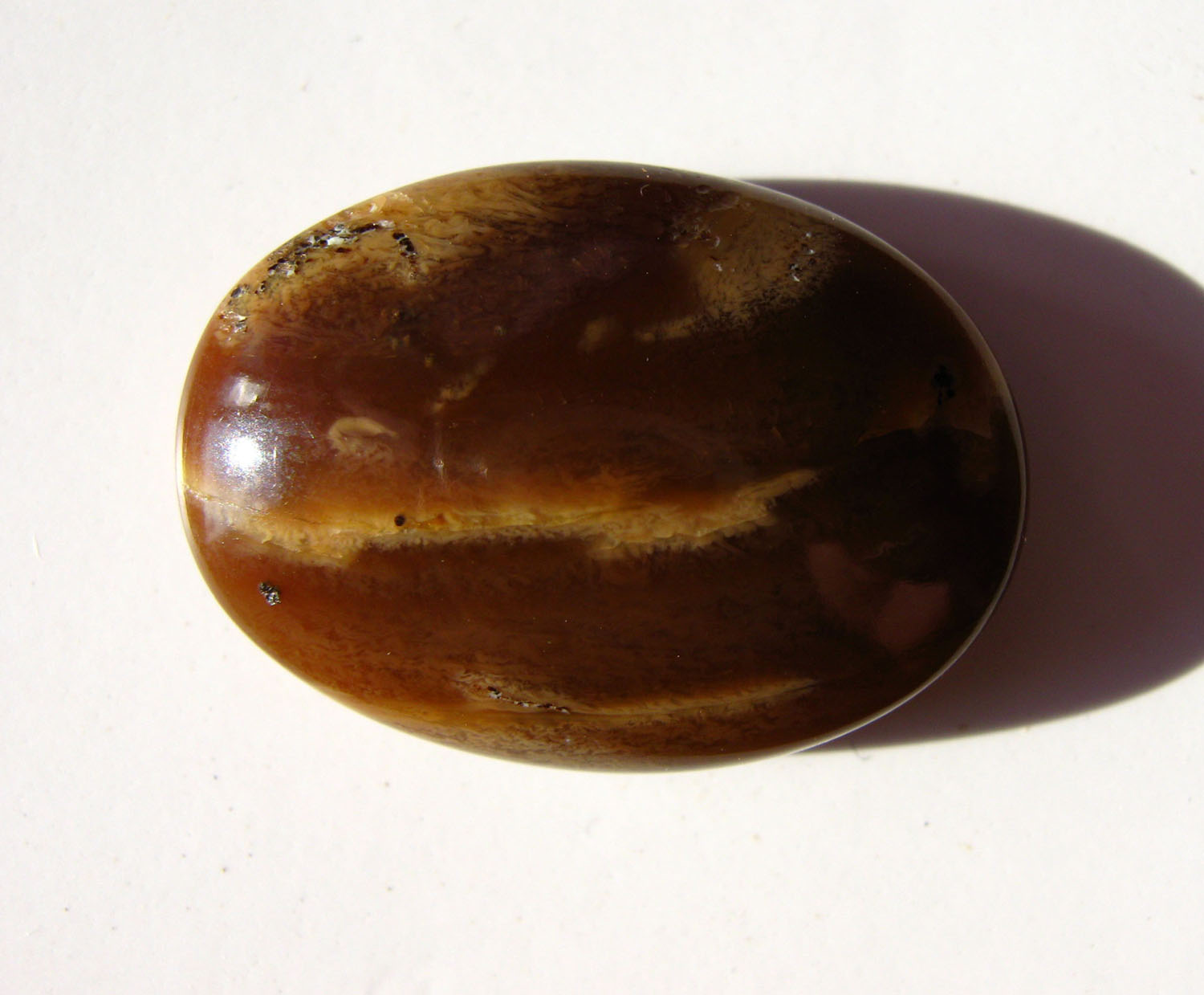 Figure \(\PageIndex{9}\): Lee Creek Amber,
Very difficult to polish and usually keep in raw forms. Have similar properties to Borneo amber. It was found at PCS, North Carolina in the active phosphate mine. 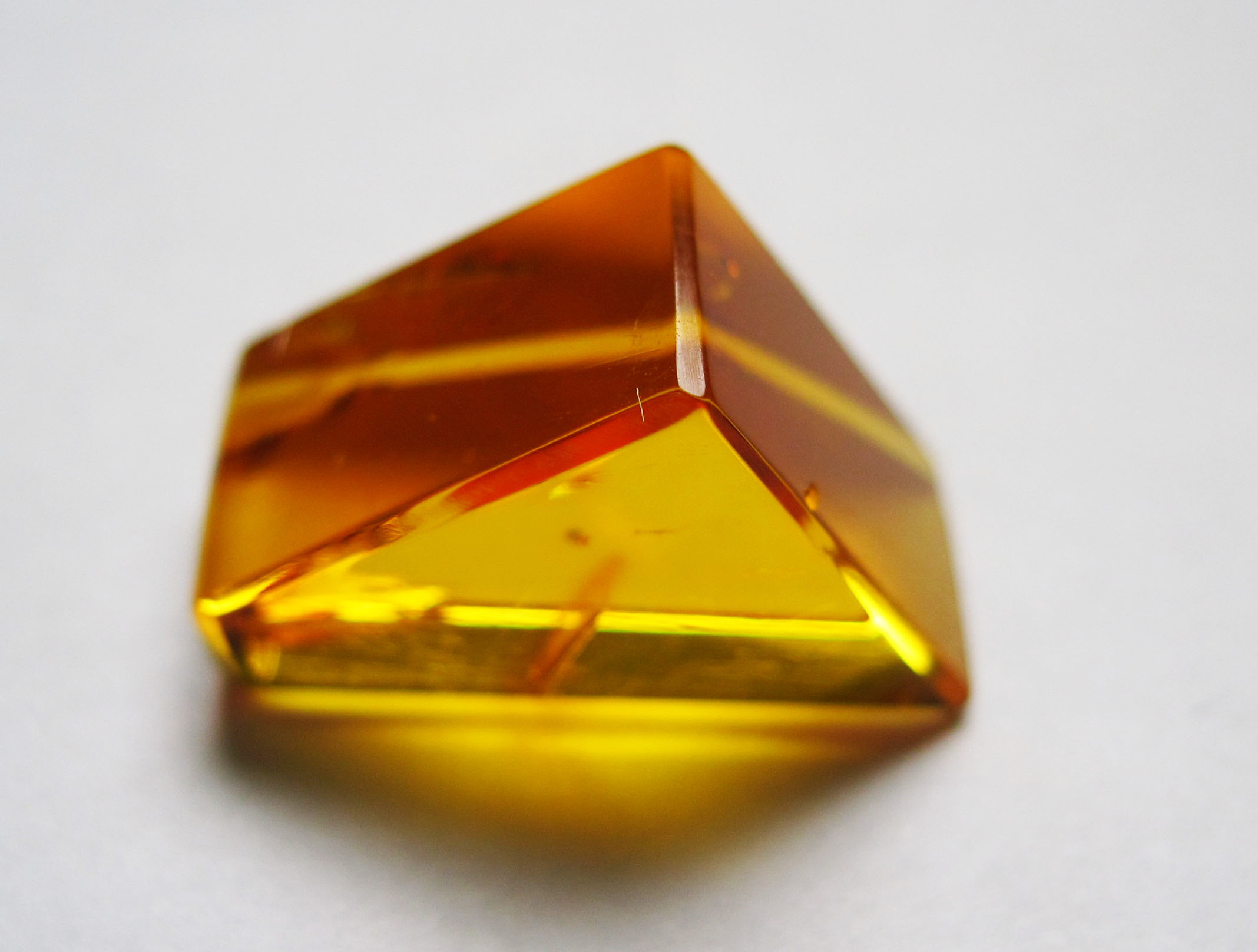 In Memory of David Gibson and His Passion for Amber