Scientists are a long way from being able to predict earthquakes. A good prediction must be accurate as to where an earthquake will occur, when it will occur, and at what magnitude it will be so that people can evacuate. An unnecessary evacuation is expensive and causes people not to believe authorities the next time an evacuation is ordered.

Where an earthquake will occur is the easiest feature to predict. Scientists know that earthquakes take place at plate boundaries and tend to happen where they’ve occurred before (figure 1). Earthquake-prone communities should always be prepared for an earthquake. These communities can implement building codes to make structures earthquake safe. Figure 1. The probabilities of earthquakes striking along various faults in the San Francisco area between 2003 (when the work was done) and 2032.

When an earthquake will occur is much more difficult to predict. Since stress on a fault builds up at the same rate over time, earthquakes should occur at regular intervals (figure 2). But so far scientists cannot predict when quakes will occur even to within a few years. 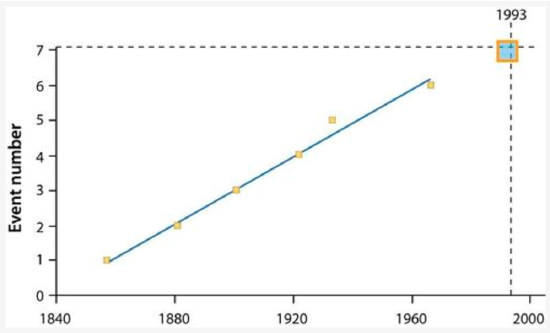 Figure 2. Around Parkfield, California, an earthquake of magnitude 6.0 or higher occurs about every 22 years. So seismologists predicted that one would strike in 1993, but that quake came in 2004 – 11 years late.

Folklore tells of animals behaving erratically just before an earthquake. Mostly these anecdotes are told after the earthquake. If indeed animals sense danger from earthquakes or tsunami, scientists do not know what it is they could be sensing, but they would like to find out.

The geology of California underlies the state’s wealth of natural resources as well as its natural hazards. This video explores the enormous diversity of California’s geology: