Beaches are a type of landform that typically occur along coastlines and are present alongside bodies of water. They usually experience waves or current flow behavior that deposits and reworks sedimentary grains as well as their geologic structure over time. The fluids at work in shaping this environment include water and air (laminar, turbulent, and transitional flow types).

The key transport processes that dominate in shaping this type of environment include waves and turbulent flows via storms, lower to higher energy, respectively. Flow speeds present in this environment are almost always too fast (experiencing higher Reynolds’ Number) to allow for mud-sized grains to accumulate. Rather, small, medium, and larger sedimentary grains tend to be transported with a very poorly sorted accumulation at the depositional site (1). There are many different flow speed and turbulence variations present in waves. The ebb and flow nature of the tides at varying depths modulate the maximal and minimal flow speeds experienced among the waves (Reynolds’ Number). These factors all lead to a multitude of sedimentary variations along beaches.

At the breaker zone, wave turbulence of varying flow speeds is experienced. As the waves move in from offshore (greater depth) carrying sedimentary grains of varying sizes and shapes closer to the swash zone (shallower depths), the flow speed, and therefore turbulence, increases rapidly. The suspended grains transported by these waves promptly deposit medium-to-larger/coarser sized sedimentary grains at a varying gradient along the breaker zone (2). The accumulation of sedimentary grains at this site tends to be poorly sorted and sub-rounded to angular, forming planar laminae dipping towards the ocean at the contact site. As the waves move back offshore from the breaker zone (high turbulence and flow speeds) they tend to carry and transport some medium-to-heavy grains back as the tide recedes from the swash zone, others are left deposited at the base.

In contrast to the breaker zone, turbulence and flow speeds of waves located in the offshore zone tend to be lower in energy and more consistent. Flow energy (Reynolds’ Number) and turbulence decreases with increasing depths, which is due to the difference in aeolian influence present on the surface of the water versus the lack thereof at greater depths. Larger and coarser grains tend to be carried and transported closer to the surface in this zone with smaller grains experiencing transportation and deposition closer at the base (1).

During periods of high tides, such as storms, the behavior and location of grain transportation and deposition shift greatly. As the ebb and flow of high tides act along the shoreline, the tides will usually reach up and over the berm (maximum distance the waves can reach under normal non-stormy conditions) and deposit sedimentary grains further in along the shoreline. The presence of high winds under these conditions create aeolian dunes along the drier portions of the beach face.

The common sedimentary structures that are characteristic of this environment are produced by the processes of wave ripples, planar lamination, cross-bedding, and bioturbation (3). Sedimentary grains of all varying sizes and shapes are deposited along the coastline - depending on the turbulence experienced by the waves’ ebb and flow (Reynolds' number at the time of sediment deposition). The principle of original horizontality, as is the case with sediment and stratigraphic units, is very much at play in this environment.

Grains deposited along and past the berm zone of the beach tend to be smoother in texture and less dense due to ease of transportation. Under non-stormy conditions, this zone experiences aeolian behavior and produces wind ripples, cross-bedding, and dunes as sedimentary structures. Grains tend to be well sorted with varying grain shapes present (1).

Grains deposited at the breaker zone tend to be poorly sorted, medium to coarser/larger in size and range from sub-rounded to angular in shape. This is due to the gradual decrease in depth as the wave approaches the breaker zone and thus increasing in turbulence. The sedimentary structures present at this zone tend to be wave ripples and planar laminae with a dip towards the ocean (6).

In the offshore zone, the transportation and deposition of sedimentary grains vary in size, sorting, and shape depending on the depths of the current. This is due to the circular motion of waves caused by the behavior of wind blowing across the surface. This aeolian influence across the ocean surface decreases gradually with increasing depths until being eliminated entirely just prior to reaching the ocean floor. The sedimentary structures present within this zone include cross-bedding lamination, planar lamination, and bioturbation via marine organism behavior.

Walther’s Law of Facies states that the vertical depositional succession of stratigraphic facies reflects the lateral changes in sedimentary layers witnessed within the environment. It also states that when a depositional environment shifts laterally, stratigraphic layers will be deposited on top of one another (6). Walther’s Law is very much at play in a beach environment. As the overall sea level rises and falls, the present stratigraphic layers will be altered in accordance with Walther’s Law. Going from the beach, to the breaker zone where shallow marine rocks reside, to the offshore zone where deep marine rocks reside, all these layers will shift laterally reflecting the behavior experienced by the tide. Parts of the aforementioned lateral layers will also be deposited on top of another in accordance with the ebb and flow of the waves. 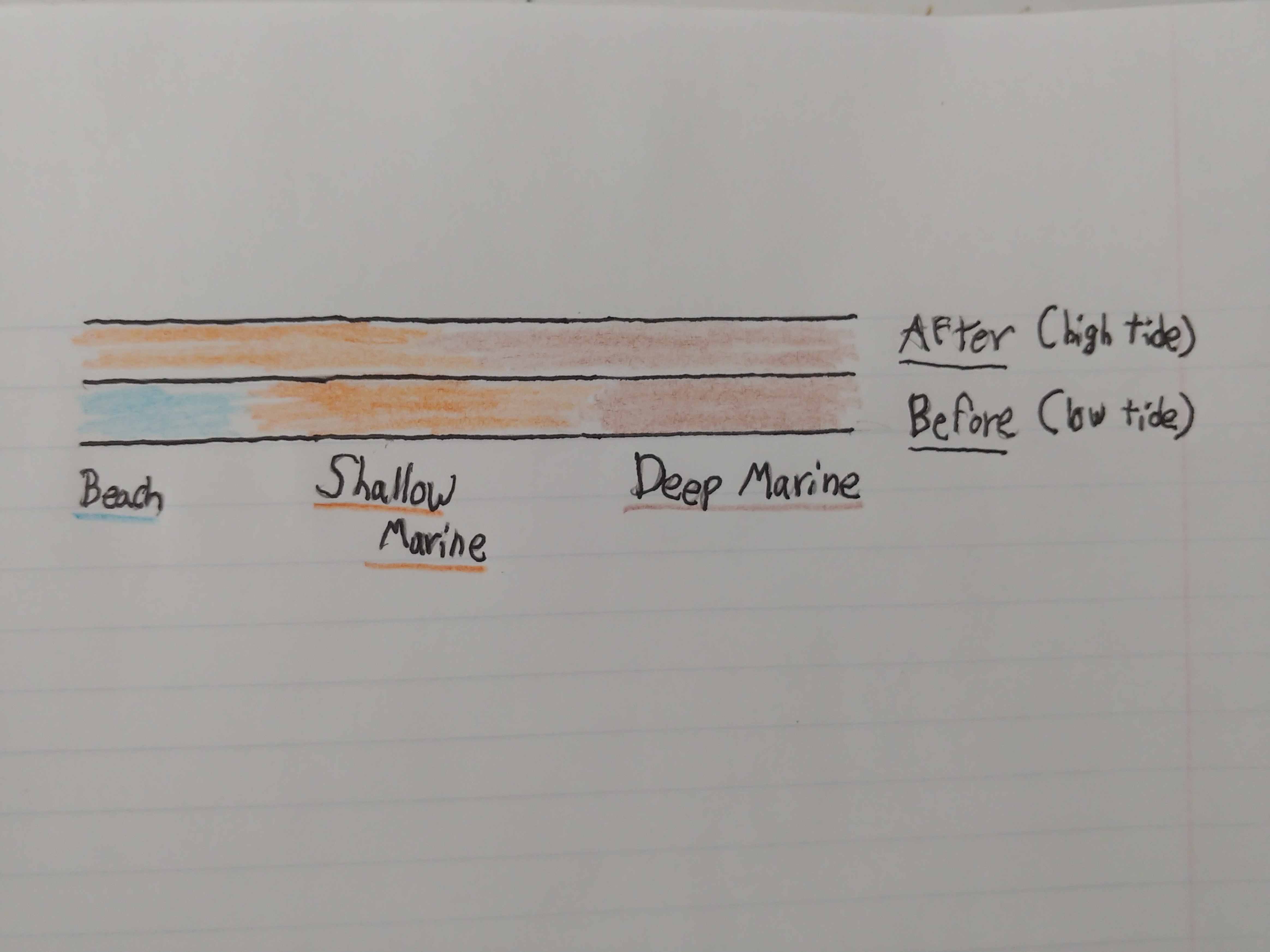 *Quick note regarding Walther's Law. If erosion, non-deposition, or a break in deposition have taken place in the stratigraphy - Walther's Law will not work in these cases (4).

Beaches are a type of landform that typically occur along coastlines and are present alongside bodies of water. They usually experience waves or current flow behavior that deposits and reworks sedimentary grains as well as their geologic structure over time. The vertical depositional succession of stratigraphic facies reflects the lateral changes in sedimentary layers witnessed within this environment. Common sedimentary structures that are characteristic of this environment are produced by the processes of wave ripples, planar lamination, cross-bedding, and bioturbation. The key transport processes that dominate in shaping this type of environment include waves and turbulent flows via storms, lower to higher energy (Reynolds' Number), respectively.