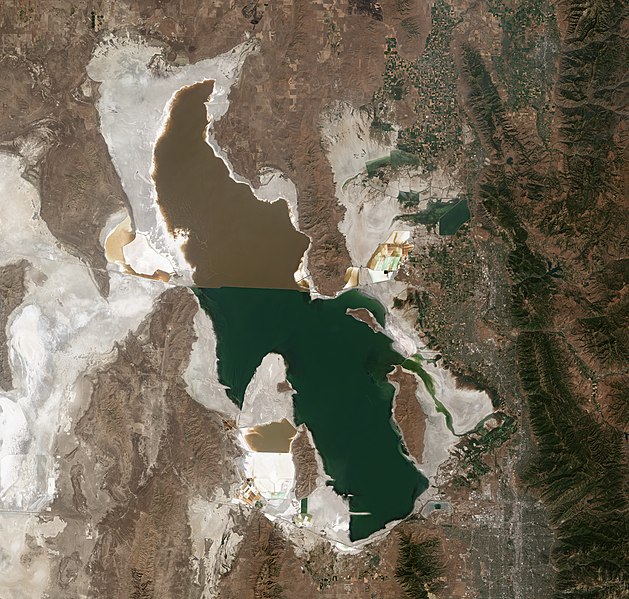 (Above, there is a picture of the Great Salt Lake in Utah, USA. It is one of the largest lakes in the United States aside from the Great Lakes and is largely considered a saline lake. Various portions of the lake are too salty for anything other than a few highly-specialized species.) Blue-green algae are associated with the precipitation of tufas and travertines in both spring orifices and inflow streams; however, the cause of this association may be due to the metabolisms of the algae or inorganic precipitation of carbonates that trap the algae (Hardie et al, 1978).

The dry mudflat facies is commonly associated with ephemeral saline lakes and are in general differentiated from the ephemeral saline lake facies in that they preserve depositional structures. At the surface, the mudflats will usually have polygonal mudcracks which are desiccation cracks and a thin layer of saline crusts which are surface efflorescences (Hardie et al 1978). Two types of saline crusts can form: thin, brittle, and dense crust made up of micritic alkaline earth carbonates; and puffy, porous, and crystalline crusts that are made up of soluble minerals like halite, trona, thermonatrite, or thenardite (Hardie et al, 1978). In addition, the soluble minerals in the second type of saline crust are usually dissolved by storm flooding and so their presence is recorded via the disruption and destruction of the top part of each depositional unit (Hardie et al, 1978). However, the sedimentary features of dry mudflats are not well known, but it is hypothesized that they could have small, millimeter-scale laminae and crystals of gypsum, glauberite, etc. (Hardie et al, 1978). The flow velocity, shallowing storm flood water, and traction deposition in dry mudflats could also produce sedimentary structures that are fine grained but also upper flow regime bedforms (Hardie et al, 1978).

Perennial saline lakes are a type of saline lake that remains deeply water-filled to some extent for most years. The strata of perennial lakes reflect the fact that they are constantly depositing saline material onto the lake bottom and so a major structure within these strata are crystalized salt laminae (Hardie et al, 1978). Clastic mud laminae can also be deposited at irregular points throughout the strata of a perennial lake as a result of different storm flood events (Hardie et al, 1978). The salt crystal laminae can also be altered diagenetically as a result of bacterial reduction into a different material, such as sulfide, or through recrystallization which would erase the original depositional structure (Hardie et al, 1978).

Erosion from wind action on the bottom of the alluvial fan, sandflat, and both of the inflow stream floodplains sub-environments creates the dune fields, deflation flats, and hollows that are characteristic of the dune fields facies (Hardie et al, 1978). In some cases where the sediments of a dry saline lake bed are eroded, the sand making up the dunes in this facies can be made up of salt mineral grains like gypsum (Hardie et al, 1978).

In the saline lake sub-environments, bioturbation may come in the form of halophyte plant roots, invertebrate burrows, bird feeding pits, or terrestrial animal burrows (Hardie et al, 1978). The alluvial fan, sandflats, dunes, and mudflats facies tend to have these features, which interrupt or destroy depositional layers (Hardie et al, 1978). Blue-green algal mats can accumulate on the bottom of saline lakes and it is diagenetically possible for them to be converted into kerogen, which has been associated with oil shales (Hardie et al, 1978). Additionally, the shoreline facies is commonly occupied by small cyanobacterial mats (Renaut and Long 1989). (The above was taken from Renaut and Long 1989. It depicts stratigraphic columns of Carbonate-dominated and Siliclastic-carbonate mudflat facies within the saline lakes of the Cariboo Plateau in British Columbia, Canada. The mudflat facies and shoreline facies are interlinked in that depending on the water level of the saline lake the shoreline can move further up a mudflat or down to its lowest extent.) (Source. The above illustrates a stratigraphic section of Bristol Dry Lake, USA. Notice that alluvial fan facies starts off with the coarsest grains and that the sediments closer to the saline lake have finer sediment. Also, note that the bottom saline mudflat section illustrates a periodic increase in grain size due to faster water flow from storm flooding.)

Saline lakes are a unique depositional environment whose deposits are influenced by largely periodic water flow from storm flooding, but they are also shaped by aeolian processes and the surfacing of groundwater through springs. Along the cross-section of this environment towards the lake-itself, water flow is expected to decrease into a near or complete standstill. The deposits as a result decrease in grain size towards the lake - largely forming mud layers at the perimeter of and within the saline lake. As the lake level changes, the type of salts deposited change and the level change defines the saline mudflat subfacies and dry mudflat facies as the border between these is the shoreline. Sedimentary structures are highly deformed within the saline lake due to disturbance from salt crystal growth and many of the facies along the shoreline and within the lake are deposited upon by microorganisms including cyanobacteria. Lastly, the habitat surround saline lakes is in danger of disappearing putting a variety of organisms that rely on it in danger (Further Reading).

Hardie, L.A., Smoot, J.P., Eugster, H.P. “Evaporites and Siliciclastics of the Permian Nippewalla Group of Kansas, USA: a Case for Non-Marine Deposition in Saline Lakes and Saline Pans.” Modern and Ancient Lake Sediments. Special Publications of the International Association of Sedimentologists, no. 2, 1978, pp. 7-41.