There are also intertidal zones that are characterizes by soft substrates, such as sand or mud. Because this substrate is soft, we find many burrowing organisms, referred to as infauna. Examples of infauna include clams and some types of snails, worms and small crustaceans. By digging into the sand or mud, these organisms are protected from predators and can remain moist when the tide is low.

Mudflats (tidal flats) are areas in which coastline shores are separated from the destructive forces of the ocean’s waves. They are created through the deposit of sediments originating from the oceans and rivers. During the event of a high tide, sea water level rises to engulf the entire area bringing in nutrients from the oceans. As the sea water extracts during the low tide, a vast amount of nutrients are left behind making the mudflat a rich feeding ground for a plethora of organisms. The ecosystem that exists within the area heavily revolves around this nutrient delivery system. The abundance of nutrients make mudflats one of the world’s most productive ecosystems, and as such, produces one of the most diversified range of living organisms. 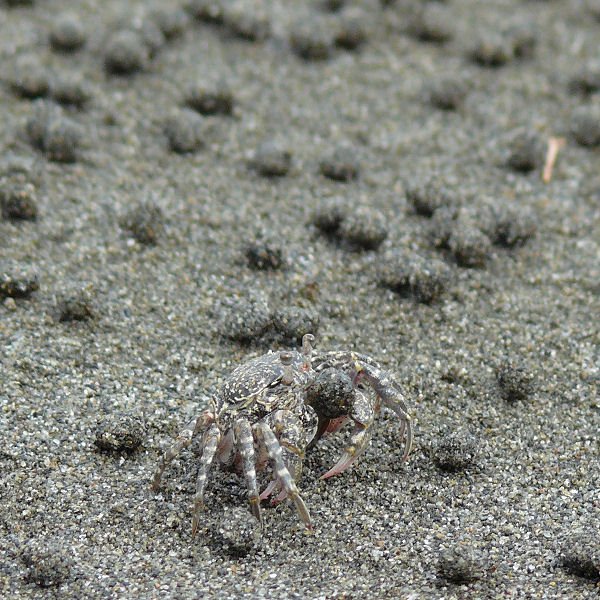 The notorious sand bubbler crab is a species that depends on the mechanism that brings in nutrients from the sea. They only emerge to feed during periods of low tide, right after the sea water has retreated back into the ocean. They sift rapidly through the fine sediments (sand) for food and throw aside the rest in the form of a small ball. The entire surface of the area in which these crabs inhabit can be covered in these balls just as the high tide is about to come in, to which now the crabs are the ones retreating back underneath the sands.

You can watch this crab in action by viewing this video: https://www.youtube.com/watch?v=6XJtq2d_lFs