The astronomical cost of retrofitting bridges brings up a major problem faced by society. As you look at the building inventory in your town or the bridge inventory in your state, you soon recognize that in this era of budget cutbacks in government, the money is not available to retrofit even a sizeable percentage of the inventory. Decades will pass before dangerous buildings are retrofitted, with the retrofit decision commonly based on criteria other than earthquake shaking. When faced with a recommendation by two select committees to schedule the retrofit of dangerous buildings in Oregon, even over a time frame of many decades, the 1997 Oregon legislature did not act. However, a subsequent legislature passed Senate Bills 14 and 15 requiring that educational facilities from K-12 to public universities and emergency facilities, including hospitals and fire and police stations, be seismically strengthened by the year 2032. A preliminary evaluation was completed in 2007. In 2002, Oregon voters passed ballot measures to authorize the legislature to issue bonds to finance the construction required by these two bills. More recently, the Portland Public School District, the largest in Oregon, passed a bond issue with funds to retrofit old school buildings. If that work is completed before the next earthquake, children’s lives will be saved. I return to this topic in the last chapter.

The decision on what to retrofit is a form of triage. In a major disaster involving hundreds of severely injured people, limited medical aid requires decisions to help first those people who are more likely to survive. In earthquake retrofitting, the triage decision would be made to first retrofit those buildings that are most critical to the community, especially in an emergency, or structures whose destruction would be catastrophic to the population. These structures are called critical facilities. Let’s consider the second category first. In Chapter 6, mention was made of the nuclear reactor at the Hanford Reservation in eastern Washington. Catastrophic failure of the reactor might result in the release of lethal amounts of radioactive gases and liquids, endangering the lives of hundreds of thousands of people, including those living downstream in Portland. Clearly, the Hanford nuclear reactor and stored nuclear wastes are critical facilities; they must be designed to meet the highest seismic design criteria even if the time of the next earthquake is not known. The large dams on the Columbia River are also critical facilities. If a dam failed during an earthquake, it would release enormous volumes of water from the reservoir impounded behind it. These dams must be designed to withstand the highest conceivable amount of seismic shaking. The Van Norman Dam in the San Fernando Valley of California came very close to failure during the M 6.7 Sylmar Earthquake in 1971 (Figure 12-16). Had failure occurred, the waters impounded behind the dam would have overwhelmed many thousands of homes downstream, resulting in the loss of thousands of lives. It was an incredibly close call.

Continuing with our triage dilemma, what facilities in your town must continue to operate after an earthquake? Certainly, the command structure of the local government must function, because local government leaders will direct rescue efforts and make decisions that could avert spin-off disasters that can accompany an earthquake, such as major fires and tsunamis. So we should include the police and sheriff’s departments, the fire department, city hall, and the county building, including the office of county emergency management services.

How about hospitals? Several hospitals were severely damaged in 1971 (Figures 12-1 and 12-10), and injured people had to be transported to distant hospitals that had not been damaged. Schools? Most of the school children of Spitak and Leninakan, Armenia, were in their classrooms when the 1988 Spitak Earthquake struck. The classrooms were in poorly constructed, Soviet-era unreinforced-concrete buildings that collapsed, killing most of the pupils and teachers inside. There is a five- or six-year age gap in those communities in Armenia; most of the young people of that age were killed in the earthquake.

School buildings fared badly in the 1933 Long Beach Earthquake because so many of them were unreinforced brick buildings. It was providential that there were no children in those buildings at the time of the earthquake. 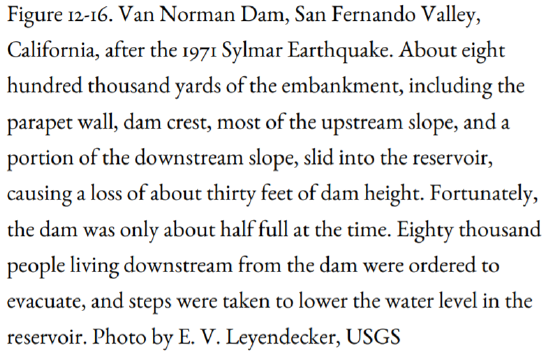 Had the classrooms been full, hundreds of children might have died here also. This fact became obvious to parents after the Long Beach Earthquake, leading to the passage of the Field Act requiring earthquake standards for school buildings. As a result, most school buildings in California have already been replaced or recycled.

Seattle, Washington, and Portland, Eugene, and Corvallis, Oregon, have passed major bond issues to bring school buildings up to modern building codes. The Seattle School District had completed a retrofit of its aging school buildings the year before the Nisqually Earthquake. After the earthquake, District Superintendent Joseph Olchefske remarked that “Our buildings today are as secure as they could be. If this had occurred five years ago, we could have had very different vulnerabilities.”