It is late summer of 1989. Chris Goldfinger and Bruce Appelgate, graduate students at Oregon State University, and electronics technician Kevin Redman of Williamson and Associates, are in the science lab of OSU’s research ship Wecoma, looking on the TV monitor at side-scan sonar imagery taken as the Wecoma cruises above the base of the continental slope along the Cascadia Subduction Zone off central Oregon. The ship tows a “fish,” an instrument gliding thousands of feet beneath the sea surface and emitting sound signals that echo back from the seafloor to the fish and are then transmitted to the lab aboard ship. On the video screen, these images look like aerial photos, showing the ocean floor in black and white in unprecedented clarity and detail. But these “photos” are created from reflected sound waves, not reflected light. The experience is like being in a balloon drifting slowly through the sky and looking down at a hitherto-unseen landscape. It is late summer of 1989.

Suddenly Goldfinger sees a fault. Crossing the screen in a straight line, it offsets by strike-slip a sea-floor channel and a landslide, and it buckles the seafloor into a low hill. The image of the faulted channel on the video screen looks oddly like a man with a guitar so, naturally, it becomes known as “Elvis” (Figure 4-1). Unfortunately, that name doesn’t stick, and it is formally named the Wecoma Fault for the ship that found it. Later, the research submarine Alvin would descend to the pitch-black base of the continental slope, and scientists in the crowded cockpit of the sub would locate the fault zone in the glare of the headlights of the sub and sample it. The rocks are strongly sheared, with linear grooves, proof that this is a place where rocks grind against other rocks.

Using side-scan sonar imagery and topographic mapping of the seafloor by the National Oceanic and Atmospheric Administration (NOAA), Goldfinger would find at least nine of these strike-slip faults off the Washington and Oregon coast, cutting both the Juan de Fuca Plate and the adjacent North American continental slope. He and Mary MacKay of the University of Hawaii would find active folds buckled up as the Juan de Fuca Plate drives beneath the North American continent (Figure 4-2). Their conclusion: the lower part of the North American continent close to the subduction zone is everywhere being crushed and deformed into faults and folds, like snow on the front of a snowplow blade. The source of the destruction: a much larger fault, previously hidden, which slopes gently landward beneath this highly deformed zone, as shown by a seismic-reflection profile similar to those acquired by the petroleum industry (Figure 4-2). In oceanographic expeditions crisscrossing the base of the continental slope, one of the world’s great earthquake faults is slowly coming into view (Figure 4-3), a fault that carries the North American continent on its back as it crushes the deep-sea sediment of the Juan de Fuca Plate beneath it. For three decades after the first discovery that Cascadia is an active subduction zone, the fault itself could only be viewed by seismic-reflection profiles (Figure 4-2) and by relatively crude depth soundings. With new technology developed by NOAA, the fault can be imaged at the base of the continental slope from Vancouver Island to northern California. On the west side of the fault is the broad sediment-covered plain of the Juan de Fuca Plate, marked only by long, meandering channels carved by sand-laden currents that flow along the seafloor (Figure 4-4). This plain stretches away westward to the Juan de Fuca Ridge (Figures 2-4, 4-5), where new oceanic crust is formed by volcanoes at rifts along the ridge axis. East of the subduction-zone fault, the continental slope rises as a rugged mountain wall, with fold ridges heaved up where the plates converge (Figures 4-4, 4-5). The lower part of the continental block is cut by west-northwest trending strike-slip faults (Figures 4-1, 4-3a, b), formed because the Juan de Fuca Plate intersects North America obliquely, and North America is deformed like a stack of books on a shelf. Figure 4-3a shows the Daisy Bank fault west of Newport, showing structures similar to those formed by strike-slip faults in California. If the ages of sedimentary layers are known, the strike-slip rate on the fault may be determined (Figure 4-3b). Landslides off southern Oregon, also related to subduction, are tens of miles across. Off Washington, the continental slope is carved into great submarine canyons, including the Astoria Canyon off the coast of northern Oregon, west of the mouth of the Columbia River (Figure 4-4). North of the Astoria Canyon is another canyon, then another and another, cutting deeply into the slope off Washington (Figure 4-5). At the top of the slope is the continental shelf, a flat surface carved during lower sea-levels of the Ice Ages. East of that, finally, is the shoreline itself (Figure 4-5). These submarine canyons were not eroded by running water, as canyons on land are, because the continental slope was never above sea level. They were cut during the last few hundred thousand years, in the Pleistocene, by slurries of water and sand brought to the sea by the Columbia River, swollen with floodwater from melting ice sheets in British Columbia and the Rocky Mountains, and by other major rivers draining melting glaciers in Puget Sound and surrounding mountains and flowing west through the present Strait of Juan de Fuca and down a broad valley south of the Olympic Mountains of southwest Washington. The muddy and sandy water was heavier than clear seawater, so it churned violently down the continental slope like great snow avalanches, carving the submarine canyons in the process (Fig. 4-6). The avalanches traveled for hundreds of miles, far out onto the Juan de Fuca Abyssal Plain. When the currents finally stopped, the sediment settled out as turbidites, sand and mud deposits named for the turbid water that carried them. In the ten thousand years since the Pleistocene, the Columbia River floods have been smaller, more like they are today, and they no longer have the energy to generate the sediment avalanches that carved the submarine canyons and deposited the thick turbidite layers in the Pleistocene. However, Hans Nelson and Gary Griggs, when they were graduate students at OSU working under the direction of Professor LaVerne Kulm, found thinner turbidite layers deposited within the Pleistocene channels, even far out on the abyssal plain. Interspersed among these turbidites is a layer of ash deposited on land by the cataclysmic eruption of Mt. Mazama to form Crater Lake 7,700 years ago (Figure 4-7), then washed into the Columbia River by its tributaries and carried out to sea. These turbidites were clearly not related to the melting of Pleistocene glaciers, so how could they have formed? John Adams had been an invited guest at a meeting of the Oregon Academy of Sciences in 1987 debating the paradigm change of great earthquakes in the Pacific Northwest (discussed in the Introduction). After the meeting, Adams visited the core lab at OSU to study the cores that Kulm’s students had taken many years before to test his hypothesis that these turbidites had been triggered by great earthquakes.

Adams found that three of the cores taken along the length of the Cascadia deep-sea channel contained thirteen turbidites deposited since the eruption of Mazama Ash (Figure 4-7). Other cores from Juan de Fuca submarine canyon, below the confluence of several submarine canyons carving the continental slope off Washington, had the same number of turbidites above the Mazama Ash as in these canyons upstream from the confluence (inset, Figure 4-5). If turbidites in the upper canyons had been deposited by local events limited to an individual stream flood, the Juan de Fuca Canyon should have contained a much larger number of turbidites because they would all have collected downstream past the confluence. This convinced Adams that the turbidites had not been triggered by a local event within a single canyon but a regional event that affected the entire Washington and Oregon offshore as far south as the Rogue River submarine canyon (which also had thirteen turbidites above the Mazama Ash).

Chris Goldfinger and Hans Nelson continued the study of the turbidites, collecting additional cores and subjecting them to radiocarbon dating. They dated the shells of microscopic organisms within the layers of fine-grained sediment that rained down into the canyons, clay that was interrupted by each turbidite (Figure 4-8). As in other paleoseismological work, they could not date the turbidite directly, and thus the earthquake that generated it. The turbidite would be dated only as younger than one fine-grained sediment layer and older than another. 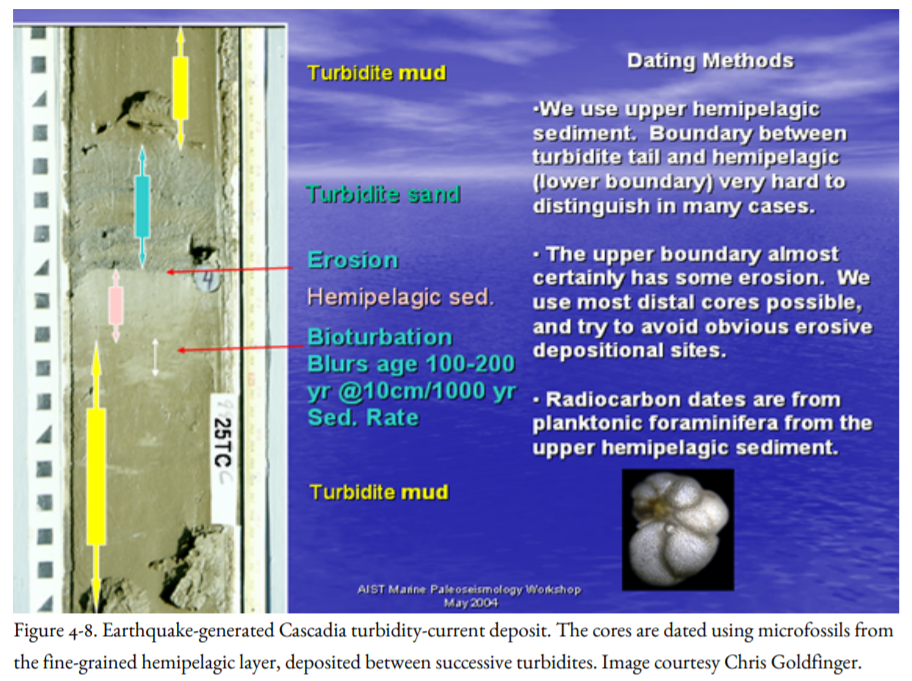 Because thirteen turbidites had accumulated in the 7,700 years since the eruption of Mt. Mazama in most of the submarine channels (some channels had fewer turbidite layers), Adams had been able to determine the average recurrence interval of Cascadia turbidites as about six hundred years. Goldfinger and Nelson were able to confirm this recurrence interval using the large number of radiocarbon dates they obtained and, in addition, to date older turbidites back to ten thousand years ago. Just as a consistent thirteen turbidites had accumulated since the Mazama Ash, eighteen turbidites (Figure 4-9) had been deposited in the past ten thousand years, a recurrence interval of more than five hundred and fifty years. The presence of thirteen post-Mazama turbidites in the Juan de Fuca, Cascadia, Willapa, Grays, Astoria, and Rogue canyons demonstrated to Goldfinger and Nelson that all turbidites had been deposited by events that had affected most, if not all, of the Cascadia Subduction Zone. The only trigger that made sense was a subduction-zone earthquake affecting the entire Washington and Oregon offshore.

Figure 4-9 identifies Cascadia earthquakes that have occurred in the past 10,000 years based on the turbidite evidence illustrated in Figures 4-6, 4-7 and 4-8. It is clear from Figure 4-9 that earthquake recurrence is not periodic, meaning that the earthquake history does not have value in predicting the next one except in a very general way. Earthquake recurrence intervals vary from 200 years to more than a thousand years. In addition, the earthquakes varied in magnitude, with the largest events 5900 and 8800 years ago, considerably larger than the magnitude 9 earthquake dated at 1700 A.D. (Figure 4-9) and described in greater detail below.