A tsunami is a very long and/or high sea wave or coastal serge of water caused by an earthquake or other disturbance. Tsunamis get their name from Japan (where they are fairly common): "Tsu"[ harbor], "nami" [wave].

Tsunamis are caused by displacement of the earth's crust under an ocean or body of water of any size. They can also be generated by earthquakes, volcanic explosions, underwater landslides, even asteroid impacts. When the solid earth moves, the water above it also moves with it (Figures 10-32 and 10-33). Tsunamis are the result of both the initial shock waves and the following motion of the water readjusting to a stable pool (sea level). Tsunamis can travel great distances throughout the world's ocean. Their energy is dissipated when they approach shorelines where they come onshore as a great surge of water, with or without massive waves crashing onshore. Although most tsunamis are small (barely detectable), some modern tsunamis have reached inland elevations many hundreds of feet above sea level.

Figure 10.32. How a tsunami is generated by an earthquake. 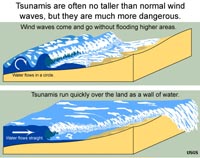 Figure 10.33. Tsunamis move onshore more as a surge than just a wave.