Divergent plate boundaries are locations where tensional forces are pulling things apart. In locations where lithospheric plates are diverging, the rates of divergent motion range from 2 to 17 cm/year.

Seafloor spreading features and processes include:
• Involves oceanic crust (OC) only.
• Tensional forces pull oceanic crust apart (forming faults that split deep into the newly forming ocean crust).
• This forms a mid-oceanic ridge (MOR).
• Volcanic activity along faults and fracture zones allows magma to rise cool on or near the seafloor surface.
• This volcanic activity generates new seafloor/oceanic crust,
• New oceanic crust moves away from spreading center as more is formed.
• Youngest oceanic crust is found near the ridge, oldest (and colder)crust is far away from ridge.
• Uplifts occurs as it is rifted, so MORs are the shallowest part of deep ocean basins.
• The MOR is symmetrical about the ridge.
• Magnetic reversals preserved in volcanic rocks are found along MORs worldwide.
• Sediments thicken away from the ridge (discussed in Marine Sediments chapter).• Hydrothermal vents (i.e.: vents of hot water Figure 4.9. The East Pacific Rise is a rapidly forming spreading center (a mid-oceanic ridge that separates the Pacific Plate to the west from (north to south) the North American Plate, the Rivera Plate, the Cocos Plate, the Nazca Plate, and the Antarctic Plate. See Figure 4.6.

• Initially, when a continental rift forms it has continental processes such as the formation of large lakes, rivers, and beaches. Later, as it pulls farther apart it can become an oceanic rift when sea water floods in. It then becomes a MOR.

* The breakup of Pangaea began with continental rifting starting about 200 million years ago with Africa pulling apart from North and South America. It eventually flooded with seawater and became the new Atlantic Ocean Basin.

Crustal extension occurs where a divergent plate boundary develops under a continental landmass on a large scale, associated with continental rifting (Figure 4.12). 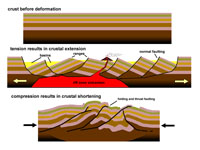 Both crustal extension and continental rifting are occurring in northern Gulf of California and throughout North America's Great Basin region under Nevada, Arizona and eastward into the Rio Grand River rift valley in New Mexico (Figure 4.13). As the Atlantic Ocean opened, the North American continent was pushed over a spreading center that is now the entire region of Utah, Nevada, Arizona, and parts of New Mexico. Baja California and the Peninsular Ranges of San Diego and Orange counties have been rifted away from the Mexican coastline gradually over about 23 million years. Baja will continue moving northward, eventually crushing into southern Alaska in the distant future! Figure 4.13. Gulf of California and Great Basin—a region where crustal extension is occurring.