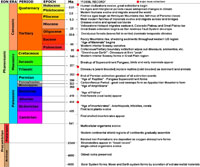 Geological time refers to the time of the physical formation and development of the Earth (especially prior to human history). Geologic time also applies to the age and history of the Universe. Geologists have subdivided periods in Earth's history is measured periods spanning millions or billions of years. The Geologic Time Scale has been established to name segments of time periods to help define the chronology of events (such as mountain range formation), the formation of rock units (such as the age of a lava flow), the age of fossils, organizing geologic map units, and other purposes. Figure 1.30 is a standard geologic time scale listing names of major time periods with time span information. Names of geologic time periods (like Late Cretaceous or Pleistocene) are used for organizing geologic map units, charting the age or petroleum-bearing rock layers underground, and perhaps hundreds of other purposes.

Figure 1.30. Geologic Time Scale showing major geologic events in Earth history and the evolution of life on earth. New scientific discoveries are refining knowledge about the chronology and impacts or significance of events through deep Earth time.

College courses in historical geology examine what is currently known about the age of the Earth and the events as they are known or inferred to have occurred. For this course, the name of geologic time periods are used to explain the age of when rocks or sedimentary deposits formed, and where and how they occur in relation to other rocks and deposits associated with them. For example, rock layers containing dinosaur bones will correlate to the specific time period that the dinosaurs lived in the geologic past.

Every rock has a history! The geologic time scale used today has evolved through the past two centuries as new scientific discoveries have been made and new technologies for dating the age of earth materials have become available. The most recent version of the geologic time scale is released on a Geological Society of America website as updated versions become available.

Note that the notions that the Earth being old (measured in billions of years) has not been all that popular with some religious groups throughout the ages. The primary arguments about the age of the Earth and the observable universe have been resolved by the global scientific community, but paradigms have ways of shifting as new discoveries are made and new information becomes available, and those ideas are tested by scientific methods. Vast periods of time in earth history are fundamental parts of understanding biological evolution of life on earth (paleontology), understanding genetics, particularly related to human evolution, and in astronomy explaining the vastness and age of the observable universe.

Fossils are traces or remains of prehistoric life now preserved in rock.
• Paleontology: study of fossils
• Fossils are mostly found in sedimentary rocks
• Where found, fossils aid in interpretation of the geologic, geographic, and environmental past
• Fossils serve as important time indicators
• Fossils allow for correlation of rocks from different places Figure 1.31. If a second were 100,000 years - this classic diagram shows the distribution of different ages of time as if it were all squeezed into a 24 hour day. All of human history would fit in the last fraction of a second!