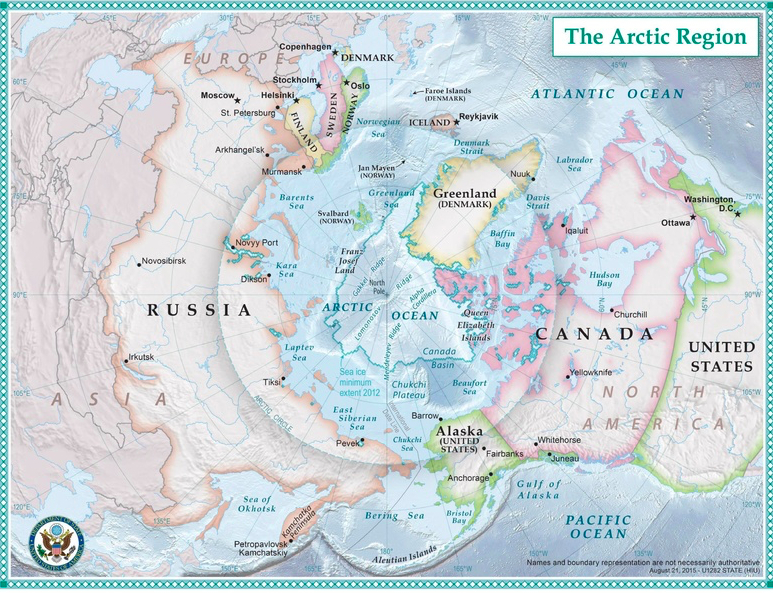 Introduction to the Arctic

Farther north than any other ocean, average temperatures in the Arctic region range from -40˚C to 10˚C and can drop as low as -50˚C (-58˚F) in the coldest winters. The Arctic Ocean acts as the main body of water in the Arctic Circle. The fact that the Arctic ocean is largely covered in ice and relatively isolated from most of the other oceans makes this ocean incredibly unique.

Organisms in the Arctic must cope with Earth’s harshest conditions, in terms of light and temperature. The Arctic has no shortage of daunting icebergs and snowcaps, freezing blizzards and winds, and sheer darkness during cold winters. Nonetheless, this ocean is teeming with life and is home to one of the most inaccessible, beautiful environments on Earth. 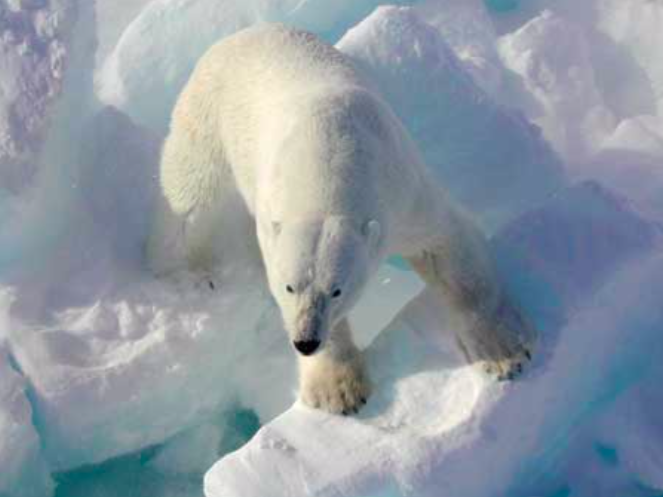 Featured above is a polar bear, a hyper carnivorous bear referred to by the Inuit as nanuq. (Wikipedia)

One of the top predators in the Arctic is the well known polar bear, which roams the Arctic ice and swims the Arctic seas. These predators feed on a variety of different organisms, including fish, birds, seals, walruses, and even certain types of whales. Other animals would include the Bowhead Whale, Beluga whales, walruses, narwhals, harp seals, bearded seals, lion mane jellies, few species of fish, and krill. The main sources of primary productivity in the Arctic ocean are phytoplankton, algae, and diatoms.

Plant Life in the Arctic

When imagining the Arctic, most picture miles of icy and snow-covered land with little life around. However, this frozen environment is home to over a thousand plant species. Since the Arctic soil is mainly permafrost, the only plants that can grow here are small, short-rooted species. Permafrost is characterized as a thin, permanently frozen layer of soil containing decomposed matter. These conditions only allow plants that are low to the ground and adapted to the harsh, freezing conditions to grow and reproduce. It is a miracle that plant life has survived and thrived in the arctic, including species such as the Arctic willow and the Arctic poppy. The Arctic poppy is a fascinating plant because it has developed an adaptation in order to survive in the Arctic environment by having the head of its flower always turned towards the sun (Fries-Gaither 2009). Most of the other species of plants residing in the Arctic tundra are low-growing shrubs, grasses, and some flowering plants. With warming ocean temperatures and the extreme melting of polar ice caps occurring in the Arctic, these plant species will be at risk, as habitat availability is getting scarcer and the climate continues to rapidly change. 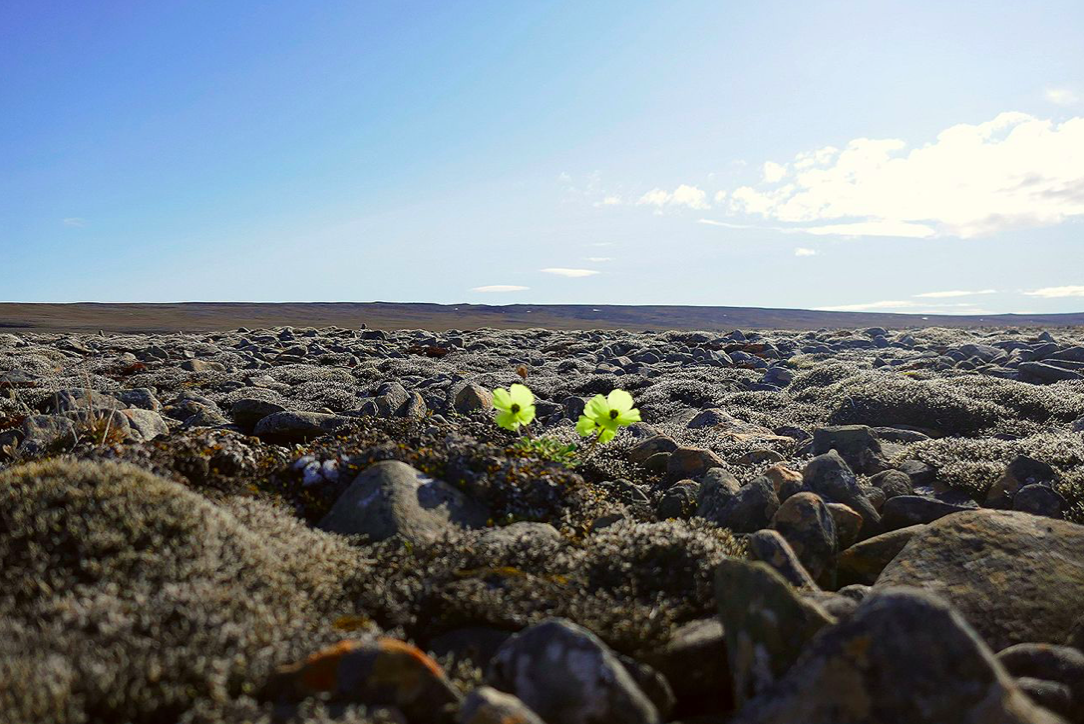 Arctic Poppies in bloom on Bathurst Island, which is part of the Canadian Arctic Archipelago (Wikipedia).

The Arctic and Climate Change

However magnificent this ecosystem may be, global warming is constantly changing the environment and threatening the stability of ocean life in the Arctic, putting it on thin ice. As the polar ice caps melt, the food web begins to change, and many species’ feeding and migration patterns change as a result. Some marine species are becoming endangered (i.e. walruses and whales), and most organisms are slow to change and recover from disruptions or damage.

The melting of arctic sea ice is only exacerbated by the effects of albedo as seawater cover increases in surface area. Albedo is a measurement that quantifies the capability of a substance to reflect solar energy. Sea ice has a higher albedo and is able to reflect sunlight better than seawater. As ice continues to melt, the overall albedo is lower and less sunlight is reflected causing the temperature to increase and ice to melt faster. This creates a positive feedback loop resulting in an exponential increase in ice melt. This feedback is harmful, especially because it continues on past the initial disturbance, and temperatures are projected to only increase. Here is a short graphic video to visualize how albedo works: https://www.youtube.com/watch?v=P7r5AKYte00

There are several ways that melting sea ice can affect the organisms living there. For example, polar bears rely on sea ice to hunt, travel, and give birth to their cubs. If there is less sea ice present, polar bears are unable to hunt as effectively and lose valuable fat stores, resulting in lower reproductive success. Many sea birds also rely heavily on the ice by using the openings and surface to hunt and scavenge for prey. In addition, they use the rocky ledges to nest and breed. Smaller organisms like algae can also be affected. Algae that depend on ice as a habitat die out when the ice is no longer permanent. Overall, sea ice is invaluable, used by humans and animals alike for hunting, breeding, and traveling; losing the sea ice would be devastating to all species living there and could endanger many of them. 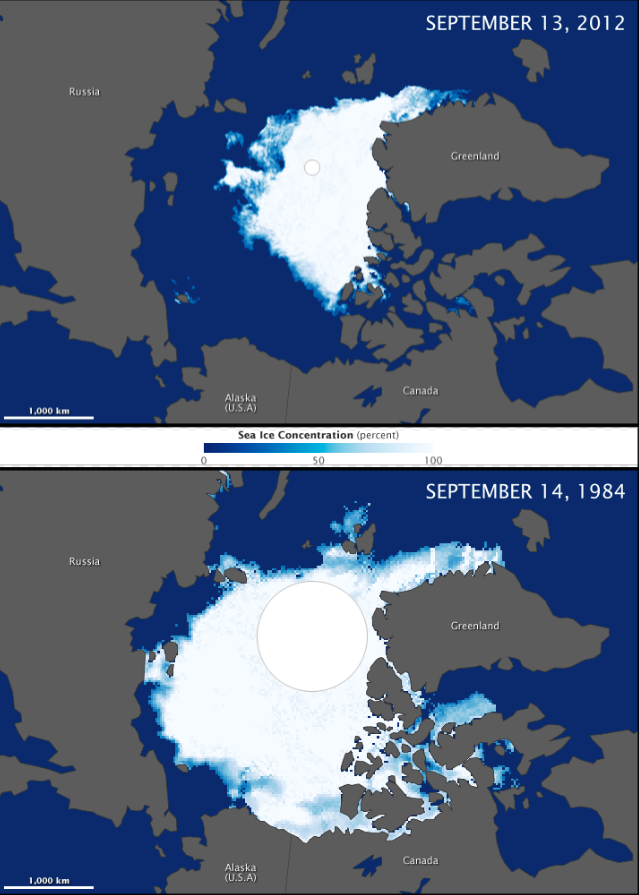 As described above the Arctic Ocean is the home to many species of algae, microbes, and animals. We still lack a complete understanding of how Arctic ecosystems function due to the extremities of the environment and limited accessibility.

An important aspect of the Arctic Ecosystem is sea ice. Sea Ice covers about 7,000,000 km^2 of the Arctic surface during the summer which doubles in the winter. The Arctic is one of the only places with ice year-round and so with time many organisms have become specialized in living in or from the sea ice. A few of these organisms include bacteria, diatoms (algae), nematodes, copepods, amphipods, pelagic crustaceans, and Arctic Cod. They live in the pores and crevices in between the sea ice. Diatoms (algae) are speculated to be one of the most important primary producers in the Arctic. They will grow constantly starting spring and through the summer when sunlight is readily available for photosynthesis to occur. This algal bloom will allow for other species to feed including protists (single-celled organisms) and zooplankton. The algae produced will stick to ice which provides resources for other organisms but it will also sink to the bottom-feeding organisms in the water column and on the sea-floor.

These primary producers fuel life in the arctic. Every year when sea ice melts, more nutrients are introduced into the water and there is more mixing of the water due to the increased surface area of the open water for the wind to shift the surface water. In coastal zones of the arctic, this is resulting in an increase in upwelling (Arrigo, Dijken, & Pabi, 2008). As a result, some communities are experiencing increased photosynthetic activity. In the short term, this can provide more energy into the system and up the food chain. Over time, this increase in nutrient abundance can have an effect on the time window of primary productivity. Phytoplankton, in turn, can begin to bloom and decline sooner in the year. Populations of grazers, that over the years have adapted to this cycle, will be reaching a mature age to feed once the population of phytoplankton has begun to decline (Post et al., 2013). Many grazers will then have life cycles that may not align with that of the plankton; they would not be existing in the same place at the same time. This would result in unstable populations of grazers and furthermore result in a trophic cascade initially declining the populations of organisms directly feeding on the phytoplankton: arctic cod and other smaller zooplankton. These populations would suffer and as a result, large predators would not have a stable source of food. Large organisms such as killer whales and seals would unfortunately decline.

In another study, it was concluded that melting ice combined with the effects of run off of freshwater into the arctic resulted in the freshening of coastal waters. This freshening of the water favors smaller phytoplankton instead of larger diatoms (Li, McLaughlin, Lovejoy, & Carmack, 2009). The energy from a smaller plankton must pass through more trophic levels in order to support a large organism such as the arctic cod. This reduced the amount of energy that is actually transferred (refer to the Energy Transfer section in 11.4 for more information). The less organisms (trophic levels) between the primary producer and the apex predator, the more efficient the food chain. Picoplankton dominated systems yield less effective feedwebs and can result in unsustainable ecosystems for large predators such as killer whales and polar bears.

The Arctic Cod, Boreogadus saida, is a key species to the Arctic environment. It has adopted a close relationship with the sea ice by using it as shelter from predators, as a feeding habitat, and a place to spawn. As discussed before, the arctic cod feed on organisms in the sea ice such as plankton and pelagic crustaceans, which are both abundant and have a wide distribution along the entirety of the Arctic. This abundance is key to the survival of much of the Arctic food chain since they are a primary resource for other fish, seabirds, seals, and whales. The melting of arctic sea ice would not only affect their physical habitat but reduce their food abundance which overall would have devastating effects on the ecosystem as a whole.