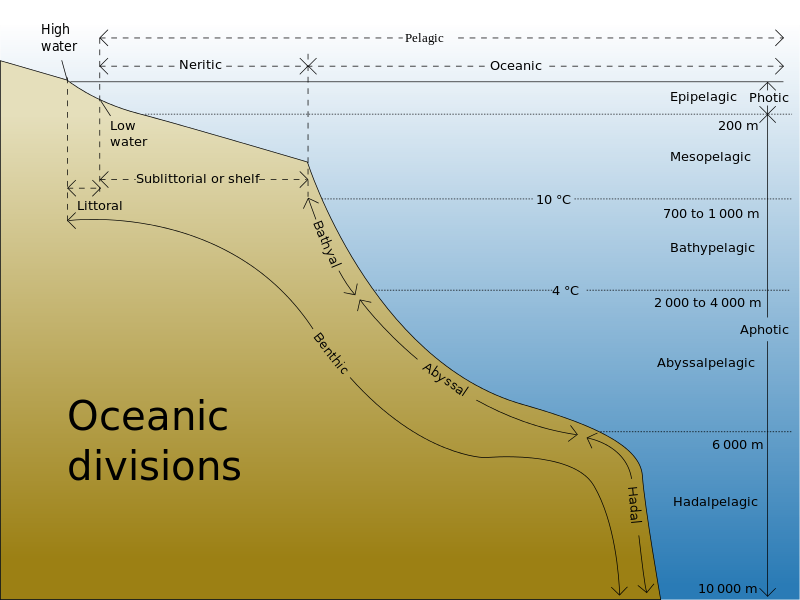 This zone, also known as the open ocean, is comprised of oceanic water that is not in direct contact with the shore or sea floor. The pelagic zone is subdivided into vertical zones, based on factors such as sunlight amount. While these waters are known as the “deserts of the sea”, a wide variety of organisms still call the open ocean their home.

This zone, known as the “sunlit” zone, begins on the surface of the water and extends to the dark, sunlight-less area where photosynthesis ceases in production. This layer is heated by the sun and is mixed vertically downward by winds on the surface. This mixing allows for a distribution of heat in this layer around the world, from super warm in the Persian Gulf (97 degrees Fahrenheit) to super cold up at the North Pole (28 degrees Fahrenheit) (National Weather Service)!

At the bottom of this layer lies the thermocline. The thermocline is a region of rapidly decreasing temperatures with increasing depth. The depth of the thermocline varies in space and time and does not remain uniform across the globe as it is dependent on the season and year. The variability of this line can be altered by unusual weather patterns, like a monsoon, or local impacts (Pusparini et al., 2017).

The mesopelagic zone reaches 200-1000m in depth. Technical deep-sea divers reach the 300m mark (National Weather Service). The mesopelagic zone is home to some of the most diverse fishes and behaviors. It is estimated that around 90% of all global fish biomass occurs in this zone (Broad, 2015). The populations of these organisms are so large that WWII hydroacoustic researchers were not able to penetrate the zone because of the high biomass of organisms with swim bladders. Common fish of the Mesopelagic include hatchetfish, lanternfish, barreleye fish, and bristlemouth fish (Shields, 2017). Many of the fish in this region are on the smaller side, but the megamouth shark (Megachasma pelagios) stands out because of its unusually massive size (Oceana). Reaching up to 13-18 feet long, megamouth shark are large filter feeders that swim with their mouth open to collect food (Oceana).

The bathypelagic zone is known as the “midnight” zone for its characteristically lightless waters. At 1,000-4,000 meters below, no light is able to penetrate the ocean water this deep, preventing any primary production. The only source of light in this zone comes from organisms using bioluminescence (National Weather Service). Bioluminescence is the ability for animals to glow in the dark, caused by the release of energy from chemical reactions in the form of light (Roberts).

Temperatures this deep are fairly constant and hover around 39 degrees Fahrenheit. This is only 7 degrees warmer than the temperature that freshwater freezes at! As a portion of the deep sea, there are no currents that affect this zone, rendering it as a relatively stable environment. The pressure this far deep would amount to 5,800 lbs per square inch, and it would be hard to believe life can withstand this much force (National Weather Service). However, there have been multiple soft-bodied organisms found this far below, as well as some bony fish (OceanScape)! Scientists have found that marine life in the bathypelagic zone can have a mass 10 times greater than predicted (Broad, 2015). The organisms that live in the Midnight zone survive off of fallen organic matter from the zones above (OceanScape). 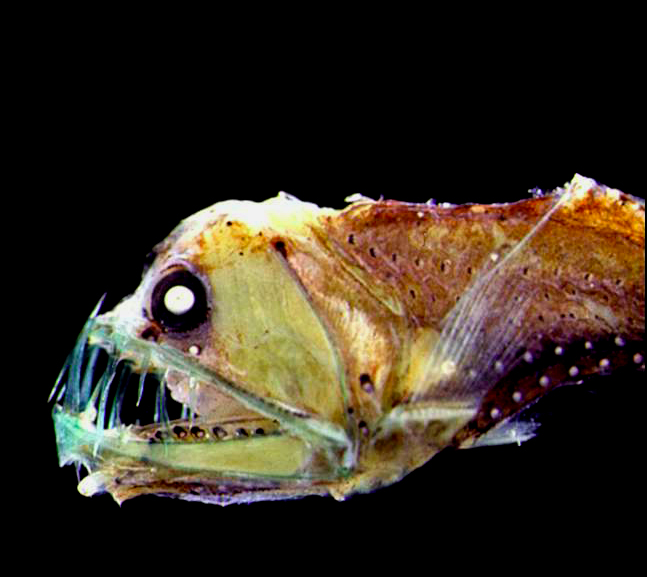 In contrast to the epipelagic zone where photosynthesis provides the main food resources for many ocean organisms, the abyssopelagic marine life rely on detritus (dead marine organisms) to sink towards this deep layer for resources. Caused by increasing water pressure, the abyssopelagic zone is much less explored than the shallower ocean zones, and it is frequent that scientists discover new species when exploring this area. The most common characteristics of species that live in this zone include slow metabolic rates, slow consumption, flexible stomachs, large mouths, and bioluminescence. Interestingly, although these animals have unique adaptations to their environment, many belong to the same groups of continental shelf species (Brennan, 2018).

Unlike its sister zones, the benthic (from Greek: “Depth of the sea”) zone is characterized not by its depth but by the body of water itself. The benthic zone is the lowest level of the ocean, encompassing the sediment surface and the water level right above it, starting from the shoreline and expanding to the deepest part of the ocean floor. Due to its large surface area, it is difficult to generalize the physical characteristics of the benthic zone; however, the most important and notable part of the zone lies with its ecological properties.

The benthic zone is home to a massive amount of oceanic life referred to as “benthos”, or bottom-dwellers. Out of all marine species, 98% of them can be found on the ocean floor, making the benthic zone the lifeblood of diversity in the ocean, comprised of mostly scavengers or detritivores, organisms that feed off of dead organic material. Benthic organisms found in the ocean floor itself, such as clams or macroinvertebrate, are called “infauna”. Stationary organisms or those that move along the ocean floor, such as polyps or sea stars, are called “epifauna”. Organisms like shrimp and flounders that move about freely in the water above the benthic zone but live at the bottom of the zone are called nektobenthos. Many organisms found in the benthic zone are highly attuned to life under deep-water pressure and little to no light availability, as these are the conditions found in the abyssal zone of the ocean. Due to their extreme adaptations, benthos do not travel far up the water column and use dead or decaying organic matter that drifts down from higher levels as a main energy source.

More on the Benthic Zone: Helpful websites and reading sources