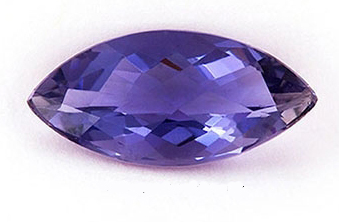 Iolite is also named "water sapphire", cordierite or dichroite. Iolite has been worn for centuries and derives its name from “Ios” - the Greek word for violet. It is often claimed, that due to its strong pleochroism, ancient Vikings used iolite for navigation on cloudy days. It is conjectured that the gemstone acted as a polarizing filter and allowed the ancient sailors to determine the position of the sun. Although this is a widely published story, there is no empirical archaeological evidence that actually supports it.
The soft blue color makes it a very attractive gemstone. Iolite is the 21st anniversary gemstone.

Iolite is a color variety of the mineral cordierite. Sometimes the name "cordierite" is used to indicate "iolite".
The green variety of cordierite is named praseolite.

Iolite may be confused (due to its color) with sapphire and tanzanite.

Iolite is usually blue to violetish-blue. Rarely it is colorless.

Iolite is a type II stone in the GIA clarity grading system is usually included. Typical inclusions are: 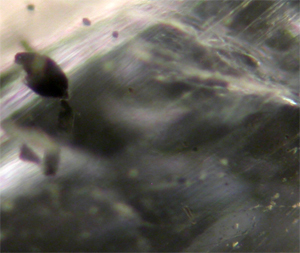 Although iolite is usually confused with sapphire and tanzanite due to its color, its optical properties will distinguish iolite from them easily.

Iolite is very strongly trichroic and this is the primary test in separating iolite from other gemstones. The three colors you will find are through dichroscopic examination are:

Iolite is biaxial with a negative optic sign. The β ray is almost halfway between α and γ so precise readings should be taken.
A typical reading will be nα = 1.535-1.539 and nγ = 1.540-1.543
The maximum birefringence ranges from 0.008 to 0.012
Tanzanite is also biaxial but has a positive optic sign and its values are too high to indicate iolite. Sapphire is uniaxial and the readings are also too high.

Quartz has RI readings in the range of iolite, but is uniaxial.