The hydrostatic balance is used to determine the specific gravity of a gemstone. Although it is a fairly simple apparatus to operate, it can be time-consuming. One must put the results into a calculation, something not all gemologists enjoy doing.
A specific gravity reading is considered a "primary test" in gemology yet, due to the time this method can consume, it is often regarded as a method of last resort in a standard gemological setup.

Specific gravity (SG) is a constant ratio of an object's weight compared to an equal volume of water. When an object is totally immersed in water, it will experience an upward thrust that is equal to the volume of water which is displaced by the object. This will make the object appear lighter in water.
The first to observe this was Archimedes while investigating a possible fraud concerning a crown made for King Hiero of Syracuse (present-day Sicily).

When King Hiero commissioned a new gold crown, a certain volume of gold was provided to a goldsmith who manufactured the crown to the liking of the king. Soon after, rumors circulated that the goldsmith may have been fraudulent, that he may have added silver to the gold, making a nice profit for himself on the side.
King Hiero asked Archimedes to investigate. One day while at the public baths, Archimedes noticed how his body mass caused the water in the bath to overflow. In his excitement over finding a possible answer to the problem, he ran home naked, shouting "Eureka!" (“I've found it!”).

Archimedes then immersed equal weights of gold and silver in water and, by observing the amount of water that was displaced, he realized that the mass of gold displaced less water than the silver. He then immersed the crown. Through a series of calculations he was able to determine how much gold and silver was used to create the crown. The fraud was detected. That was the first time in history the concept of SG was used.

Archimedes' Principle (or the Law of Buoyancy) states that: the upward force on an immersed object is equal to the weight of the displaced fluid.

In gemology, 4 different types of hydrostatic balances are used.

The two-pan scales are the most time-consuming scales to use though some jewelry stores still have them. But they are rarely used for determining SG of stones, mostly because the counterweights are generally too big to be of any help. Besides, they really need to be calibrated every few years.

Even so, the principle of the two-pan scale is very useful for explaining the hydrostatic balance. 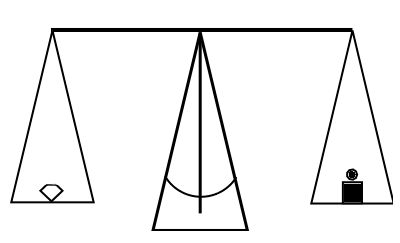 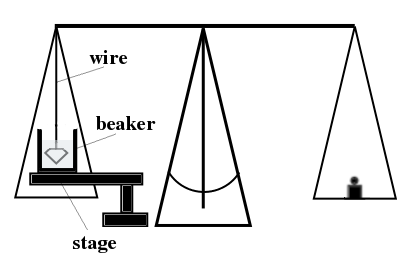 Then a freestanding stage with a beaker filled with water is introduced. After that, a thin coil wire basket is hung on the left side of the balance with the basket totally immersed in the water. At this point, the balance should be in complete balance by adding a small weight that is equal to the weight of the basket.
The stone is placed in the thin coil wire basket and then immersed in the water. Again, counterweights are placed on the right pan as before and the result of added weights will be the weight of the gemstone in water.
The wire basket should be of a material that is not water absorbent to avoid false readings. One should also take care that air bubbles around the basket and stone do not influence the readings, since air bubbles tend to rise upwards and can add to the upward thrust.
To avoid surface tension, a small droplet of detergent is added to the water. 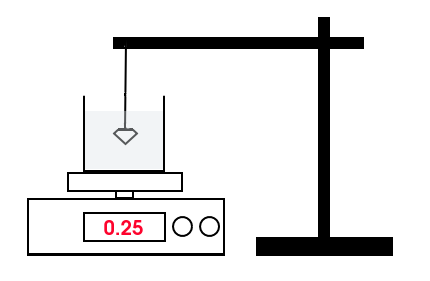 Most gemological scales are of this type. They can be either analog or digital and they come in various sizes and in every price range. For our purposes, it is best to get a carat scale as opposed to a gram scale. A gram scale may serve very well if it has a high precision that can read 0.01 grams, which is equivalent to 0.05 carat. These digital scales are very economical, under USD 100.

Various hydrostatic setups can be used with digital scales. One could use a bridge on which the glass beaker is placed, with a coil wire that is placed directly on the scale (see video below). Or the beaker can be placed directly on the scale with the stone hanging from a wire that is attached to a stage (as illustrated on the right), but note that in this last setup, the standard gravity is equal to the weight of the stone divided by the weight that is read when the stone is hung in water, and also the wire has to be as thin as possible. 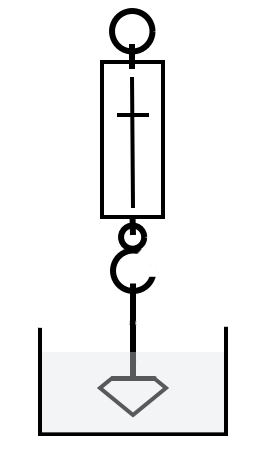 This type of hydrostatic weighing can come in handy when handling large pieces of rough that are heavier than your usual balance can handle.
Spring balances are relatively inexpensive and can vary widely in accuracy. Before weighing the stone, one must, of course, weigh the part of the balance that is immersed into the water so that can be deducted. As usual, the stone is first weighed in air and then it is weighed in water.
The larger the rough and the higher the accuracy of the balance, the more precise your measurements will be.

A spring balance is usually used in the field just like a recreational fisherman would use it to weigh a fish.

These are also known as "Hanneman direct reading specific gravity balances" in honor of the one who reinvented (or at least popularized) this old wheel – Dr. W. Wm. Hanneman. It cleverly makes use of both Archimedes' Principle and Archimedes' Lever. It is an adoption of "The little balance" by Galileo Galilei.
Their operation is like the weighing scales you see at a physician's or weight-watchers' office, where a weight is shuffled from one end to the other.

A direct reading scale can be constructed with little effort from household materials and has an accuracy of about 0.002 carat. Instead of having to go through the pain of calculations, this scale will give you an immediate read on the SG of the gemstone.
The full description on its construction is given in Dr. Hanneman's "Guide to Affordable Gemology".

Some countries impose strict regulations on the use of weighing scales when used in a commercial environment. This means that the scale needs to be labeled with a document (sticker) proving the scale is calibrated to legal requirements.
These scales are in general much more expensive.