There are two main types of glaciers. Continental glaciers cover vast areas of land in extreme polar regions, including Antarctica and Greenland (Figure 16.2.1). Alpine glaciers (a.k.a. valley glaciers) originate on mountains, mostly in temperate and polar regions (Figure 16.0.1), but even in tropical regions if the mountains are high enough. Figure 16.2.1 Part of the continental ice sheet in Greenland, with some outflow alpine glaciers in the foreground. [SE]

Earth’s two great continental glaciers, on Antarctica and Greenland, comprise about 99% of all of the world’s glacial ice, and approximately 68% of all of Earth’s fresh water. As is evident from Figure 16.2.2, the Antarctic Ice Sheet is vastly bigger than the Greenland Ice Sheet; it contains about 17 times as much ice. If the entire Antarctic Ice Sheet were to melt, sea level would rise by about 80 m and most of Earth’s major cities would be submerged.

Figure 16.2.2 Simplified cross-sectional profiles the continental ice sheets in Greenland and Antarctica – both drawn to the same scale. [SE]

Continental glaciers do not flow “downhill” because the large areas that they cover are generally flat. Instead, ice flows from the region where it is thickest toward the edges where it is thinner, as shown in Figure 16.2.3. This means that in the central thickest parts, the ice flows almost vertically down toward the base, while in the peripheral parts, it flows out toward the margins. In continental glaciers like Antarctica and Greenland, the thickest parts (4,000 m and 3,000 m respectively) are the areas where the rate of snowfall and therefore of ice accumulation are highest.

The flow of alpine glaciers is primarily controlled by the slope of the land beneath the ice (Figure 16.2.4). In the zone of accumulation, the rate of snowfall is greater than the rate of melting. In other words, not all of the snow that falls each winter melts during the following summer, and the ice surface is always covered with snow. In the zone of ablation, more ice melts than accumulates as snow. The equilibrium line marks the boundary between the zones of accumulation (above) and ablation (below).

Above the equilibrium line of a glacier, not all of the winter snow melts in the following summer, so snow gradually accumulates. The snow layer from each year is covered and compacted by subsequent snow, and it is gradually compressed and turned into firn within which the snowflakes lose their delicate shapes and become granules. With more compression, the granules are pushed together and air is squeezed out. Eventually the granules are “welded” together to create glacial ice (Figure 16.2.5). Downward percolation of water from melting taking place at the surface contributes to the process of ice formation. Figure 16.2.5 Steps in the process of formation of glacial ice from snow, granules, and firn. [SE]

The equilibrium line of a glacier near Whistler, B.C., is shown in Figure 16.2.6. Below that line, in the zone of ablation, bare ice is exposed because last winter’s snow has all melted; above that line, the ice is still mostly covered with snow from last winter. The position of the equilibrium line changes from year to year as a function of the balance between snow accumulation in the winter and snowmelt during the summer. More winter snow and less summer melting obviously favours the advance of the equilibrium line (and of the glacier’s leading edge), but of these two variables, it is the summer melt that matters most to a glacier’s budget. Cool summers promote glacial advance and warm summers promote glacial retreat. Figure 16.2.6 The approximate location of the equilibrium line (red) in September 2013 on the Overlord Glacier, near Whistler, B.C. [SE, after Isaac Earle, used with permission]

Glaciers move because the surface of the ice is sloped. This generates a stress on the ice, which is proportional to the slope and to the depth below the surface. As shown in Figure 16.2.6, the stresses are quite small near the ice surface but much larger at depth, and also greater in areas where the ice surface is relatively steep. Ice will deform, meaning that it will behave in a plastic manner, at stress levels of around 100 kilopascals; therefore, in the upper 50 m to 100 m of the ice (above the dashed red line), flow is not plastic (the ice is rigid), while below that depth, ice is plastic and will flow.

Figure 16.2.7 Stress within a valley glacier (red numbers) as determined from the slope of the ice surface and the depth within the ice. The ice will deform and flow where the stress is greater than 100 kilopascals, and the relative extent of that deformation is depicted by the red arrows. Any deformation motion in the lower ice will be transmitted to the ice above it, so although the red arrows get shorter toward the top, the ice velocity increases upward (blue arrows). The upper ice (above the red dashed line) does not flow, but it is pushed along with the lower ice. [SE]

The plastic lower ice of a glacier can flow like a very viscous fluid, and can therefore flow over irregularities in the base of the ice and around corners. However, the upper rigid ice cannot flow in this way, and because it is being carried along by the lower ice, it tends to crack where the lower ice has to flex. This leads to the development of crevasses in areas where the rate of flow of the plastic ice is changing. In the area shown in Figure 16.2.8, for example, the glacier is speeding up over the steep terrain, and the rigid surface ice has to crack to account for the change in velocity. One of the factors that affects the temperature at the base of a glacier is the thickness of the ice. Ice is a good insulator. The slow transfer of heat from Earth’s interior provides enough heat to warm up the base if the ice is thick, but not enough if it is thin and that heat can escape. It is typical for the leading edge of an alpine glacier to be relatively thin (see Figure 16.2.7), so it is common for that part to be frozen to its base while the rest of the glacier is still sliding. This is illustrated in Figure 16.2.10 for the Athabasca Glacier. Because the leading edge of the glacier is stuck to its frozen base, while the rest continues to slide, the ice coming from behind has pushed (or thrust) itself over top of the part that is stuck fast.

Figure 16.2.10 Thrust faults at the leading edge of the Athabasca Glacier, Alberta. The arrows show how the trailing ice has been thrust over the leading ice. (The dark vertical stripes are mud from sediments that have been washed off of the lateral moraine lying on the surface of the ice.) [SE]

Figure 16.2.11 Markers on an alpine glacier move forward over a period of time. [SE]

Calving of icebergs is an important process for glaciers that terminate in lakes or the ocean. An example of such a glacier is the Berg Glacier on Mt. Robson (Figure 16.2.12), which sheds small icebergs into Berg Lake. The Berg Glacier also loses mass by melting, especially at lower elevations. Figure 16.2.12 Mt. Robson, the tallest peak in the Canadian Rockies, Berg Glacier (centre), and Berg Lake. Although there were no icebergs visible when this photo was taken, the Berg Glacier loses mass by shedding icebergs into Berg Lake. [SE] 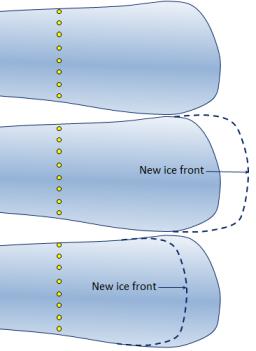 These diagrams represent a glacier with markers placed on its surface to determine the rate of ice motion over a one-year period. The ice is flowing from left to right.

1. In the middle diagram, the leading edge of the glacier has advanced. Draw in the current position of the markers.

2. In the lower diagram, the leading edge of the glacier has retreated. Draw in the current position of the markers.