The simplest and most intuitive way of dating geological features is to look at the relationships between them. There are a few simple rules for doing this, some of which we’ve already looked at in Chapter 6. For example, the principle of superposition states that sedimentary layers are deposited in sequence, and, unless the entire sequence has been turned over by tectonic processes or disrupted by faulting, the layers at the bottom are older than those at the top. The principle of inclusions states that any rock fragments that are included in rock must be older than the rock in which they are included. For example, a xenolith in an igneous rock or a clast in sedimentary rock must be older than the rock that includes it (Figure 8.2.1). Figure 8.2.1a A xenolith of diorite incorporated into a basalt lava flow, Mauna Kea volcano, Hawaii. The lava flow took place some time after the diorite cooled, was uplifted, and then eroded. (Hammerhead for scale) [SE] 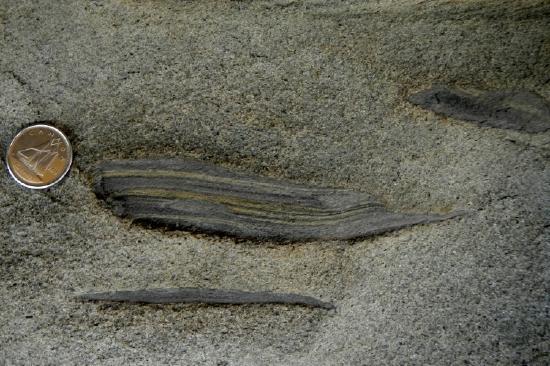 Figure 8.2.1b Rip-up clasts of shale embedded in Gabriola Formation sandstone, Gabriola Island, B.C. The pieces of shale were eroded as the sandstone was deposited, so the shale is older than the sandstone. [SE]

The principle of cross-cutting relationships states that any geological feature that cuts across, or disrupts another feature must be younger than the feature that is disrupted. An example of this is given in Figure 8.2.2, which shows three different sedimentary layers. The lower sandstone layer is disrupted by two faults, so we can infer that the faults are younger than that layer. But the faults do not appear to continue into the coal seam, and they certainly do not continue into the upper sandstone. So we can infer that coal seam is younger than the faults (because it disrupts them), and of course the upper sandstone is youngest of all, because it lies on top of the coal seam. 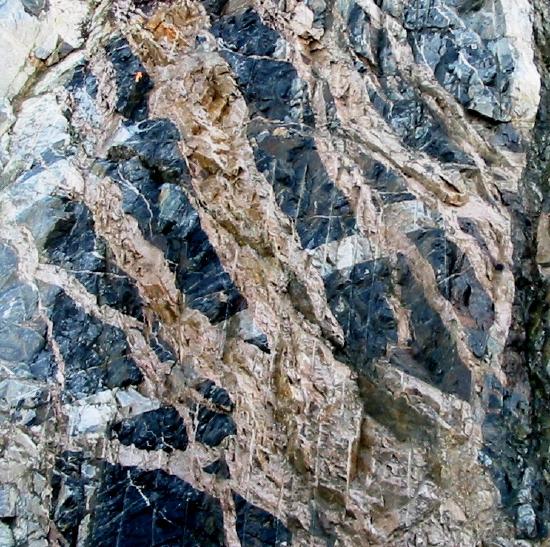 Using the principle of cross-cutting relationships outlined above, determine the relative ages of these three rock types.

(The near-vertical stripes are blasting drill holes. The image is about 7 m across.) [SE photo]

An unconformity represents an interruption in the process of deposition of sedimentary rocks. Recognizing unconformities is important for understanding time relationships in sedimentary sequences. An example of an unconformity is shown in Figure 8.2.3. The Proterozoic rocks of the Grand Canyon Group have been tilted and then eroded to a flat surface prior to deposition of the younger Paleozoic rocks. The difference in time between the youngest of the Proterozoic rocks and the oldest of the Paleozoic rocks is close to 300 million years. Tilting and erosion of the older rocks took place during this time, and if there was any deposition going on in this area, the evidence of it is now gone. Figure 8.2.3 The great angular unconformity in the Grand Canyon, Arizona. The tilted rocks at the bottom are part of the Proterozoic Grand Canyon Group (aged 825 to 1,250 Ma). The flat-lying rocks at the top are Paleozoic (540 to 250 Ma). The boundary between the two represents a time gap of nearly 300 million years. [SE]

There are four types of unconformities, as summarized in Table 8.1.1, and illustrated in Figure 8.2.4.

Table 8.1.1 The characteristics of the four types of unconformities