Through careful observation over the past few centuries, geologists have discovered that the accumulation of sediments and sedimentary rocks takes place according to some important geological principles, as follows:

In addition to these principles that apply to all sedimentary rocks, a number of other important characteristics of sedimentary processes lead to the development of distinctive sedimentary features in specific sedimentary environments. By understanding the origins of these features, we can make some very useful inferences about the processes that led to deposition the rocks that we are studying.

Bedding, for example, is the separation of sediments into layers that either differ from one another in textures, composition, colour, or weathering characteristics, or are separated by partings — narrow gaps between adjacent beds (Figure 6.4.1). Bedding is an indication of changes in depositional processes that may be related to seasonal differences, changes in climate, changes in locations of rivers or deltas, or tectonic changes. Partings may represent periods of non-deposition that could range from a few decades to a few centuries. Bedding can form in almost any depositional environment. Figure 6.4.1 The Triassic Sulphur Mt. Formation near Exshaw, Alberta. Bedding is defined by differences in colour and texture, and also by partings (gaps) between beds that may otherwise appear to be similar. Figure 6.4.2 Cross-bedded Jurassic Navajo Formation aeolian sandstone at Zion National Park, Utah. In most of the layers the cross-beds dip down toward the right, implying wind direction from right to left during deposition. One bed dips in the opposite direction, implying an abnormal wind.

Cross-beds form as sediments are deposited on the leading edge of an advancing ripple or dune. Each layer is related to a different ripple that advances in the flow direction, and is partially eroded by the following ripple (Figure 6.4.3). Cross-bedding is a very important sedimentary structure to recognize because it can provide information on the direction of current flows and, when analyzed in detail, on other features like the rate of flow and the amount of sediment available.

Figure 6.4.3 Formation of cross-beds as a series of ripples or dunes migrates with the flow. Each ripple advances forward (right to left in this view) as more sediment is deposited on its leading face.

Graded bedding is characterized by a gradation in grain size from bottom to top within a single bed. “Normal” graded beds are coarse at the bottom and become finer toward the top, a product of deposition from a slowing current (Figure 6.4.4). Some graded beds are reversed (coarser at the top), and this normally results from deposition by a fast-moving debris flow (see Chapter 15). Most graded beds form in a submarine-fan environment (see Figure 6.3.1), where sediment-rich flows descend periodically from a shallow marine shelf down a slope and onto the deeper sea floor. 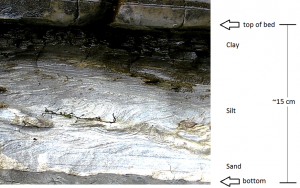 Figure 6.4.4 A graded turbidite bed in Cretaceous Spray Formation rocks on Gabriola Island, B.C. The lower several centimetres of sand and silt probably formed over the duration of an hour. The upper few centimetres of fine clay may have accumulated over a few hundred years.

Ripples, which are associated with the formation of cross-bedding, may be preserved on the surfaces of sedimentary beds. Ripples can also help to determine flow direction as they tend to have their steepest surface facing down flow.

In a stream environment, boulders, cobbles, and pebbles can become imbricated, meaning that they are generally tilted in the same direction. Clasts in streams tend to tilt with their upper ends pointing downstream because this is the most stable position with respect to the stream flow (Figure 6.4.5 and Figure 6.1.6c).

Figure 6.4.5 An illustration of imbrication of clasts in a fluvial environment.

Mud cracks form when a shallow body of water (e.g., a tidal flat or pond), into which muddy sediments have been deposited, dries up and cracks (Figure 6.4.6). This happens because the clay in the upper mud layer tends to shrink on drying, and so it cracks because it occupies less space when it is dry.

The various structures described above are critical to understanding and interpreting the formation of sedimentary rocks. In addition to these, geologists also look very closely at sedimentary grains to determine their mineralogy or lithology (in order to make inferences about the type of source rock and the weathering processes), their degree of rounding, their sizes, and the extent to which they have been sorted by transportation and depositional processes. Figure 6.4.6 Mudcracks in volcanic mud at a hot-spring area near Myvatn, Iceland [SE]

We won’t be covering fossils in any detail in this book, but they are extremely important for understanding sedimentary rocks. Of course, fossils can be used to date sedimentary rocks, but equally importantly, they tell us a great deal about the depositional environment of the sediments and the climate at the time. For example, they can help to differentiate marine, aquatic, and terrestrial environments; estimate the depth of the water; detect the existence of currents; and estimate average temperature and precipitation.

The tests of tiny marine organisms (mostly foraminifera) have been recovered from deep-ocean sediment cores from all over the world, and their isotopic signatures have been measured. As we’ll see in Chapter 19, this provides us with information about the changes in average global temperatures over the past 65 million years.

Exercise 6.4 Interpretation of Past Environments

Conglomerate: well-rounded pebbles and cobbles of granite and basalt; imbrication