Weathering is a key part of the process of soil formation, and soil is critical to our existence on Earth. In other words, we owe our existence to weathering, and we need to take care of our soil!Many people refer to any loose material on Earth’s surface as soil, but to geologists soil is the material that includes organic matter, lies within the top few tens of centimetres of the surface, and is important in sustaining plant growth.

Soil is a complex mixture of minerals (approximately 45%), organic matter (approximately 5%), and empty space (approximately 50%, filled to varying degrees with air and water). The mineral content of soils is variable, but is dominated by clay minerals and quartz, along with minor amounts of feldspar and small fragments of rock. The types of weathering that take place within a region have a major influence on soil composition and texture. For example, in a warm climate, where chemical weathering dominates, soils tend to be richer in clay. Soil scientists describe soil texture in terms of the relative proportions of sand, silt, and clay, as shown in Figure 5.4.1. The sand and silt components in this diagram are dominated by quartz, with lesser amounts of feldspar and rock fragments, while the clay component is dominated by the clay minerals. Figure 5.4.1 The U.S. Department of Agriculture soil texture diagram. This diagram applies only to the mineral component of soils, and the names are textural descriptions, not soil classes. [http://en.wikipedia.org/wiki/ Soil#media viewer/File:SoilTexture_USDA.png]

Soil forms through accumulation and decay of organic matter and through the mechanical and chemical weathering processes described above. The factors that affect the nature of soil and the rate of its formation include climate (especially average temperature and precipitation amounts, and the consequent types of vegetation), the type of parent material, the slope of the surface, and the amount of time available.

Soils develop because of the weathering of materials on Earth’s surface, including the mechanical breakup of rocks, and the chemical weathering of minerals. Soil development is facilitated by the downward percolation of water. Soil forms most readily under temperate to tropical conditions (not cold) and where precipitation amounts are moderate (not dry, but not too wet). Chemical weathering reactions (especially the formation of clay minerals) and biochemical reactions proceed fastest under warm conditions, and plant growth is enhanced in warm climates. Too much water (e.g., in rainforests) can lead to the leaching of important chemical nutrients and hence to acidic soils. In humid and poorly drained regions, swampy conditions may prevail, producing soil that is dominated by organic matter. Too little water (e.g., in deserts and semi-deserts), results in very limited downward chemical transportation and the accumulation of salts and carbonate minerals (e.g., calcite) from upward-moving water. Soils in dry regions also suffer from a lack of organic material (Figure 5.4.2). Soil parent materials can include all different types of bedrock and any type of unconsolidated sediments, such as glacial deposits and stream deposits. Soils are described as residual soils if they develop on bedrock, and transported soils if they develop on transported material such as glacial sediments. But the term “transported soil” is misleading because it implies that the soil itself has been transported, which is not the case. When referring to such soil, it is better to be specific and say “soil developed on unconsolidated material,” because that distinguishes it from soil developed on bedrock.

Parent materials provide important nutrients to residual soils. For example, a minor constituent of granitic rocks is the calcium-phosphate mineral apatite, which is a source of the important soil nutrient phosphorus. Basaltic parent material tends to generate very fertile soils because it also provides phosphorus, along with significant amounts of iron, magnesium, and calcium.

Some unconsolidated materials, such as river-flood deposits, make for especially good soils because they tend to be rich in clay minerals. Clay minerals have large surface areas with negative charges that are attractive to positively charged elements like calcium, magnesium, iron, and potassium — important nutrients for plant growth.

Soil can only develop where surface materials remain in place and are not frequently moved away by mass wasting. Soils cannot develop where the rate of soil formation is less than the rate of erosion, so steep slopes tend to have little or no soil.

The same applies to soils that are forming on newly created surfaces, such as recent deltas or sand bars, or in areas of mass wasting.

The process of soil formation generally involves the downward movement of clay, water, and dissolved ions, and a common result of that is the development of chemically and texturally different layers known as soil horizons. The typically developed soil horizons, as illustrated in Figure 5.4.3, are:

O — the layer of organic matter

B — the layer of accumulation of clay, iron, and other elements from the overlying soil

C — the layer of incomplete weathering

Although rare in Canada, another type of layer that develops in hot arid regions is known as caliche (pronounced ca-lee-chee). It forms from the downward (or in some cases upward) movement of calcium ions, and the precipitation of calcite within the soil. When well developed, caliche cements the surrounding material together to form a layer that has the consistency of concrete. Like all geological materials, soil is subject to erosion, although under natural conditions on gentle slopes, the rate of soil formation either balances or exceeds the rate of erosion. Human practices related to forestry and agriculture have significantly upset this balance.

Soils are held in place by vegetation. When vegetation is removed, either through cutting trees or routinely harvesting crops and tilling the soil, that protection is either temporarily or permanently lost. The primary agents of the erosion of unprotected soil are water and wind.

Water erosion is accentuated on sloped surfaces because fast-flowing water obviously has greater eroding power than still water (Figure 5.4.4). Raindrops can disaggregate exposed soil particles, putting the finer material (e.g., clays) into suspension in the water. Sheetwash, unchannelled flow across a surface carries suspended material away, and channels erode right through the soil layer, removing both fine and coarse material. Figure 5.4.4 Soil erosion by rain and channelled runoff on a field in Alberta. [from Alberta Agriculture and Rural Development, http://www1.agric.gov.ab.ca/$departm.../all/agdex9313, used with permission]

Wind erosion is exacerbated by the removal of trees that act as wind breaks and by agricultural practices that leave bare soil exposed (Figure 5.4.5).

Tillage is also a factor in soil erosion, especially on slopes, because each time the soil is lifted by a cultivator, it is moved a few centimetres down the slope. 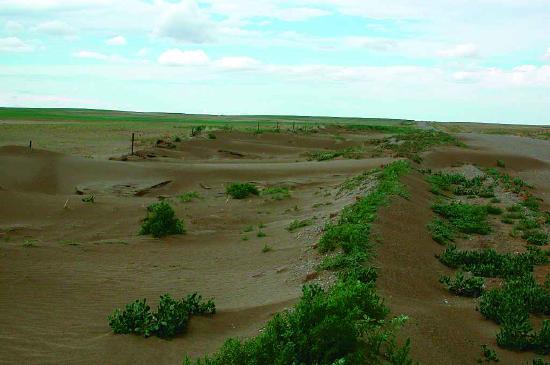