What is Chemical Weathering?

Chemical Weathering is an erosional process in which rocks and other materials are broken down by chemical reactions (predominantly by water and chemicals dissolved within it).

A. Types of Chemical Weathering

This process occurs when water comes into contact with rocks and dissolves the minerals that make up that rock into individual elements. The dissolution of calcite is a good example of this process, when water comes into contact with rocks that have abundant amounts of calcite such as limestone the calcite dissolves into the solution. The calcite will stay in the solution until the water either evaporates, reacts with other minerals, or is precipitated by another organism to make its shell. This process is extremely important on Earth, it allows many organisms such as mollusks, echinoderms, foraminifera, and coccolithophores to produce their shells which protect them. These organisms are very important to our ecological system especially foraminifera and coccolithophores because they play a vital role in the silicate geochemical weathering cycle which helps control Earths climate system.

Alteration occurs when minerals come in contact with water and are converted into different minerals with a different chemical structure, different chemical composition, or both. This alteration process is important in the formation of clay minerals in sediments. Rocks such as granite and basalt can come into contact with water and have their feldspars altered into clay minerals through this chemical reaction: KAlSi3O8 + 4H+ + 2H2O ⇒ 4K+ + Al4Si4O10(OH)8 + 8SiO2.

Oxidation occurs when oxygen reacts with other elements and electrons are transferred between the two elements, an example of oxidation is when oxygen reacts with iron to form iron oxide. Iron oxide formation is a process that is similar to alteration and forms what we know in everyday life as rust. This iron oxide is much weaker than the original iron in the rock and therefore makes the rock more likely to deform brittlely.

B. Mineralogy of Weathered Rocks

Rocks that have been chemically weathered do not have the same mineral composition as the parent rock. Overall, the composition of sediment depends on the mineralogy of the original rock, how it is transported, and the weathering environment. Different minerals weather at different rates according to the Goldich stability series, minerals like quartz and muscovite weather much less easily than minerals like olivine and pyroxene (Goldich 1938). Some minerals like olivine and pyroxene weather easier because they have more cations and more ionic bonds (Goldich 1938). Many igneous minerals that are high in magnesium and iron weather quickly to form clays, whereas the more felsic minerals tend experience physical weathering because they are more resistant to chemical weathering. The hardness of minerals also plays a role in how the rocks are weathered, when hard quartz grains hit softer plagioclase grains the plagioclase will break into smaller grains. Clay minerals stick together well and are very soft but due to their small grain size they cannot be broken down further into smaller grains by the collision with larger harder grains.

Figure 1: Example of Goldich's dissolution series from his 1938 paper where he studied soil profiles in order to understand the weathering rates of different minerals (taken from http://www.columbia.edu/~vjd1/weathering.htm)

Climate plays a major role in chemical weathering, warmer temperatures makes chemical reactions happen faster and as a result minerals weather faster in warmer more humid climates. Water is a huge part of chemical weathering as well because the water causes the dissolution of minerals in the rocks. The more water that is present the faster the dissolution and weathering occur. Vegetation also has a strong affect on the rate at which rocks weather, vegetation produces weak acids that increase the rate of both dissolution and alteration which in turn increases the rate at which weathering occurs.

When rocks break down into smaller grains they produce sediment that is available for transport. Fluid flow and gravity are the two main driving forces that transport sediment from its source region to dispositional areas such as sedimentary basins. transport by water is by far the most common type of transport and occurs in rivers, streams, lakes, and other large bodies of water. Another form of fluid flow is glacial flow where glaciers that are moving break up sediment at the leading edge of the glacier where the sediment moves with the glacier as it flows. The other form of fluid flow is wind blown transport of sediment, this happens mostly in deserts and airid environments where small sand grains can be picked up by the wind and transported to different areas. Wind transports primarily sand size grains and smaller because larger grains are to heavy for wind to transport under normal conditions.

Transport capacity is  “the maximum amount of sediment this flow can carry in suspension under equilibrium conditions for a particular sediment material” [Celik and Rodi, 1991, p. 192]. As minerals begin to weather they tend to break down into smaller clasts and undergo alteration into clays along with other types of minerals. These alterations can lead to a change in transport capacity of the weathered minerals compared to the original parent rock. Weathering tends to decrease grain size and allows more sediment to be suspended and transported in a flow that is in equilibrium. The opposite can also be true for example, when minerals weather into clays that have a sticky texture it may lead to less transport of sediment than would have otherwise happened with sand grains or pebble sized grains.

F. Why is Chemical Weathering Important? 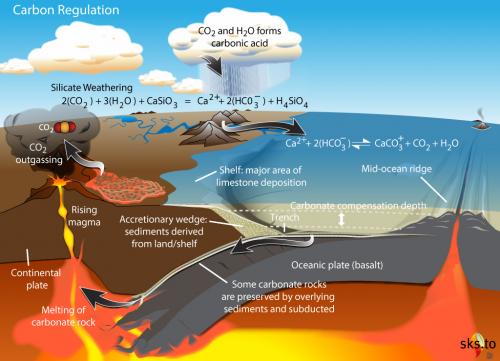 Chemical weathering is the main process that drives the carbonate-silicate geochemical cycle. Figure 2 shows how this cycle controls the long term transformation of silicate rocks into carbonate rocks over geologic time. This process is also the Earth's main way of controlling its climate through the break down of silicate rocks and the burial of carbon. Figure 3. Graphic depicting how the Earth chemically weathers silicate rocks into bicarbonate, silicon, and calcium and buries the carbon on the ocean floor. (taken from https://canvas.ucdavis.edu/courses/424715/files/folder/Lect2HCoure%20pdfs?preview=7639033)

G. How does the carbonate-silicate geochemical cycle regulate climate

The first step in the cycle is the production of carbonic acid in the atmosphere from the combination of water and carbon dioxide. Figure 3 shows that over long geologic time scales dissolution takes places and silicate rock dissolve into calcium, silicon, and bicarbonate ions which are then transported by a fresh water system such as a river to the ocean. In the ocean shell producing organisms precipitate their calcium carbonate shells by the reaction Ca2++2HCO3- ⇒ CaCO3+CO2+H2O. One of the carbon dioxides in the reaction is released back to the atmosphere while the other is trapped in the calcium carbonate shell of an organism. When the organism dies their shell will deposit on the sea floor and stay there as a carbon sink until the ocean floor is subducted and the shells are melted in the Earth. The cycle restarts after the carbon dioxide is outgassed, by volcanism, back into the atmosphere. Fundamentally this entire process is based on chemical weathering specifically dissolution of silicate rocks by carbonic acid. When carbon is sequestered on the ocean floor by the carbonate-silicate geochemical cycle it allows the planet to cool down because there is less carbon in the atmosphere to form carbon dioxide which means the planet will experience less of a greenhouse effect. Without chemical weathering on this planet there would be no inorganic process to remove carbon from the atmosphere which means the planet would likely be much hotter than it is today and may not be habitable for life. This is why the process of chemical weathering is so important for the planet and we should all thank this process for keeping our planet habitable for all of the life that inhabits it including humans.