Aeolian Processes are related to wind activity and how wind can erode, transport, and deposit sediments.

Throughout the different sites visited during the Bodega Bay field trip on January 31, 2015, there were several sources of evidence observed of Aeolian processes taking place. In Salmon Beach Creek, dunes and wind ripples were present which are both types of wind-deposited structures. The grain size in the area where these structures were observed were analyzed to be well-sorted, well-rounded, medium to very fine sands composed primarily of quartz, lithics, and shells which are very characteristic of Aeolian deposits. In Bayside Park, the sediments are almost identical to those in Salmon Creek Beach where grain sizes range from coarse silt-sized to very fine. These sediments overall are well-sorted and consist of mostly quartz and lithics with the exception of larger calcite grains from the shells of organisms inhabiting the area. Due to the great similarity between the grains from Salmon Creek Beach and Bayside Park, it was concluded that the main source of grains in Bayside Park were from Salmon Creek Beach as a result of wind transportation.

For complete audio of this section, click here: /@api/deki/files/152/Aeolian_processes.m4a

Just like in water flow, wind or air can transport grains in bedload and suspended load depending on the flow velocity and grain size/density.

Bedload refers to grains that are transported along the bed surface. Two types of sediment transport in bedload are called traction/rolling and saltation. See my video on saltation and traction below!

Suspended load refers to grains that become entrained in the flow and are transported this way until flow velocity slows down enough to deposit them. In Aeolian transportation, usually only medium to very fine sands are transported in suspension while larger grains travel by rolling and saltation. The transportation of sediment in suspension in air flow can be dangerous as well as disruptive as it can create dust storms, like the Phoenix Dust Storm of 2014.

Sediment from Salmon Creek Beach to Bayside Park was most likely transported in combination through bedload and suspended load in wind. 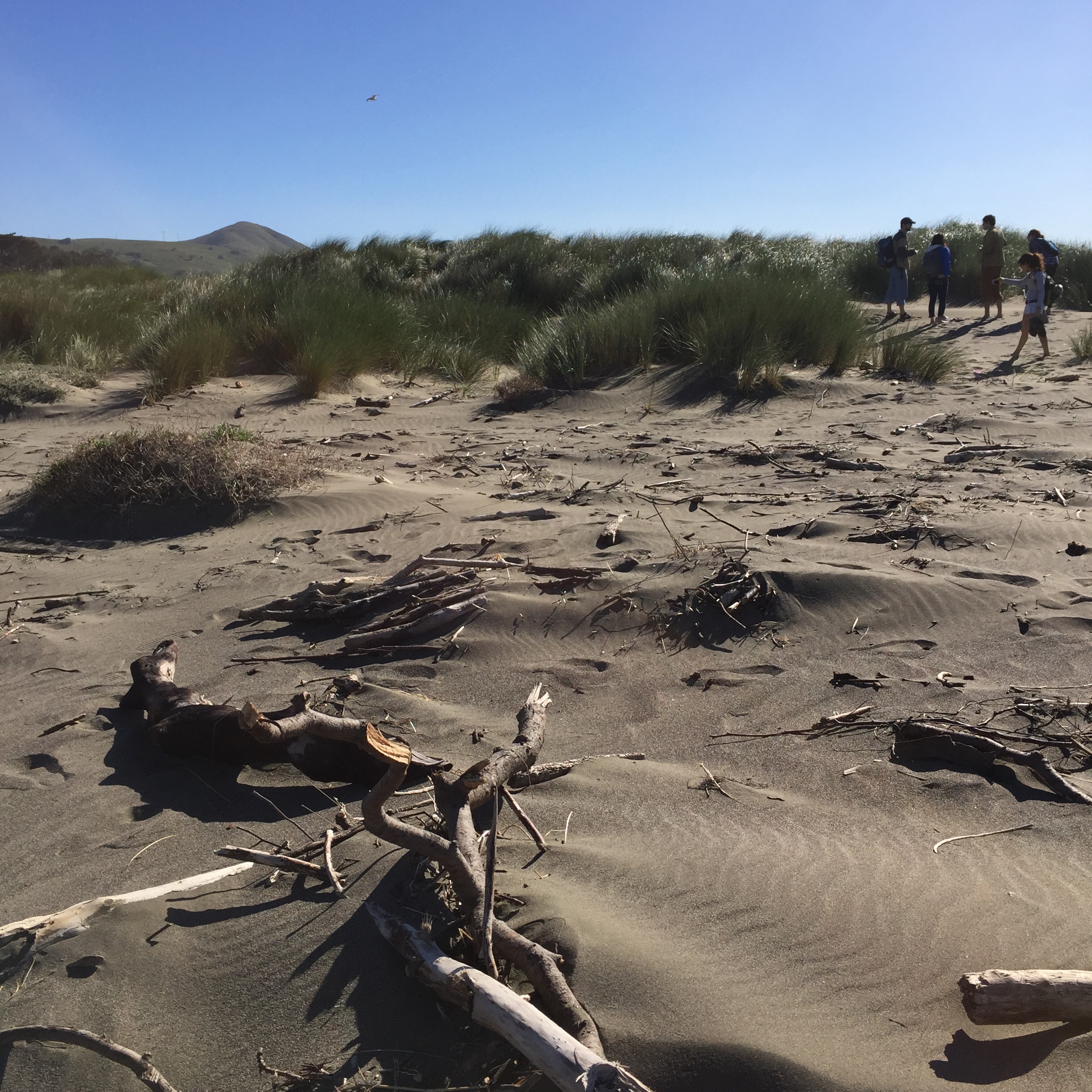 Aeolian deposits are sedimentary deposits of grains transported by wind. The picture on the right shows dunes at Salmon Creek Beach along with overlying wind ripples which are both two main types of wind deposits. Dunes and ripples are differentiated by wavelength and amplitude. Dunes have a wavelength of 60cm or greater, while ripples have wavelengths that are less than 60cm. These two structures are formed by the interaction of air flow with the sediments. Once sediments begin to pile up, dunes and ripples form. Aeolian Ripples are formed as grains migrate across a bed of sand creating patches of piled up grains. These “piles” of grains are due to irregularities on the surface of the sand that then pile in a perpendicular fashion and begin to create flow separation. Flow then reattaches below and past the "pile" and begins to erode and move grains up the the "stoss" side of the ripple. Once enough grains accumulate, the grains then avalanche down the "lee" side of the ripple and form cross-laminations The direction of these ripples are dependent on the direction of the wind which carries different sized grains depending on its strength. Ripples with sharper peaks are formed more from grains that roll, while rounded and more elongated ripples are formed from saltating grains. The ripples in the picture on the right were formed more from rolling grains rather than saltating. Dune shapes can vary between linear, crescentic, star, and parabolic while ripple shapes can very between linear and sinuous and isolated depending on flow speed.

To learn more about aeolian deposits and the different shapes they form, click here.

For complete audio of this section, click here: /@api/deki/files/158/Aeolian_Deposits.m4a

Wind can erode the surface of the Earth through wind abrasion and through deflation. Wind abrasion is the physical weathering of a rock from strong, turbulent winds, while deflation refers to wind actively removing loose particles. Wind erosion has a huge impact on shaping the Earth's surface as well as affecting our lives. It can affect crops and soils greatly disrupting agriculture and can also impact the air quality.

For complete audio of this section, click here: /@api/deki/files/159/Wind_Erosion.m4a