Reynolds number predicts the extent of turbulence in a fluid based on how fast the fluid is flowing, the geometry of the flow (how deep and wide it is, etc.), and the density and viscosity the of the fluid.

where the variables are

For the version of the equation we are using, turbulent flow has Re is greater than 2000 and laminar flow has Re is less than 500. Flow with Re between 500 and 2000 is transitional and has some characteristics of laminar flow, but some turbulence as well. (Note that different versions of the Reynolds equation are used for different flow geometries and different equations have different numerical boundaries between laminar, transitional, and turbulent flows.)

The boundary layer determines the amount of “Bed Shear Stress” which corresponds to the forces that tend to roll particles along the bed and the pressure differences above and below the grain which tend to lift them off the bed. Bed shear stress is related to the thickness of the laminar sublayer. The narrower it is, the more bed shear stress. It also depends on the slope. If the slope is steep, gravity helps pull grains down the slope, increasing bed shear stress. Also, the roughness of the bed is a factor. A rough bed deflects flows and increases turbulence, which increases the bed shear stress, particularly in places where flow is directed into the sediment and the boundary layer is compressed. (See http://en.wikipedia.org/wiki/Sediment_transport#Bed_shear_stress for more detailed information.) 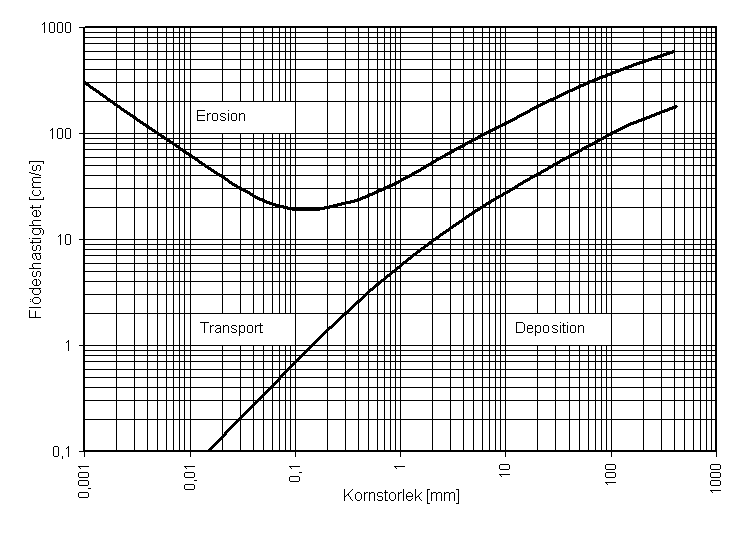 The boundaries for deposition, transport and erosion shift with changing flow depth. For example, deeper flows can move larger grains at the same flow velocity because they are more turbulent: \[Re = \dfrac{l \times u \times \rho}{µ} \tag{3.1}\] and l is larger. This is because deeper flows can have larger variations in flow speed and the laminar flow layers are very thin. They can have bursts of very rapid flow relative to the average flow speed and these bursts can pick up larger grains.

In the Hjulstrom diagram, there is an interesting area where the flow is not strong enough to move any of the particles on the bed, but those that are in the suspended load do not settle out either. This zone includes many of the waters on the surface of the Earth. In flows with any velocity or that are very deep, Re is high enough to keep some clay in suspension. Clay deposition usually occurs very slowly, e.g. when the rate of settling is just slightly faster than the average rate at which turbulence moves clay particles upward or when the clays clump together to form larger grains (which is common when fresh and salty waters mix).