2. The large group of organisms that include all creatures that have a spinal column or a feature called a backbone are called:
a. Animalia.
b. carnivores.
c. vertebrates.
d. mammals.

3. Which choice is NOT characteristic of all marine mammals:
a. They all evolved from land-dwelling ancestors.
b. They are all warm-blooded and breath air.
c. They all bear live young and have mammary glands for milk.
d. They all live their entire lives in the ocean.

4. The group of marine carnivores that are called Pinnipeds include:
a. seals, sea lions, and walruses.
b. blue whales and green whales.
c. sea otters and polar bears.
d. sea snakes and sea turtles.

5. Of the order Sirenia, marine mammals that are herbivores that live in coastal waters of the tropical Atlantic are called:
a. manatees.
b. dugongs.
c. walrus.
d. fir seals.

6. All members of the Order Cetacea have elongated skulls with blowholes. Which is NOT a member of
the order Cetacea?
a. dolphins.
b. porpoises.
c. killer whales.
d. sea lions.

7. The Suborder Mysticeti include blue, finback, humpback, gray, and right whales. These whales have
fibrous plates in their mouths they use to sieve prey items from seawater or sandy sea bottoms. These
fibrous plates are called:
a. polyps.
b. baleen.
c. countershading.
d. netting.

Use the diagram below to answer questions 8 and 9. 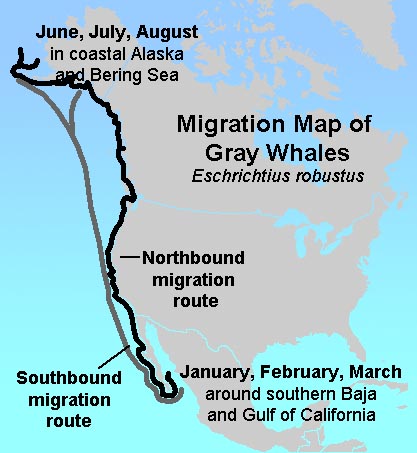 8. What would explain the shape of the northbound migration route of Gray Whales?
a. During the late spring and summer there is an abundance of food along the western coastline of North America due to coastal upwelling.
b. As spring transitions to summer there is more food production in the polar region than the tropical region.
c. Whale try to migrate through areas where zooplankton production is at their highest rate.
d. all of the above.

9. What would best explain the shape of the southbound route of gray whales?
a. There isn't as much food available for gray whales in coastal waters in the in the fall and winter.
b. Whales have stored up large amounts of fat stored up from eating all summer in polar waters.
c. Gray whale donʼt eat as much during mating and birthing season is in the winter months in the waters around Baja.
d. all of the above.

10. The largest group of marine animals (including over half of all vertebrate species) are:
a. marine mammals.
b. marine reptiles.
c. birds.
d. fish.

11. A variety of macroscopic zooplankton (copepods) that are extremely abundant in the waters around
Antarctica and are a major part of the food chain in that region of the world are called:
a. penguins.
b. krill.
c. anchovies.
d. sardines.

12. Examples of floating macroscopic zooplankton include:
a. jellyfish and Portuguese man-of-war.
b. foraminifera and coccoliths.
c. radiolarians and diatoms.
d. squid and octopus.

13. Fish have many adaptations for finding prey. Some varieties of fish wait and pounce (like groupers)
when prey swim or crawl by. These kind of animals are called.
a. loungers.
b. lungers.
c. lurkers.
d. cruisers.

14. When sometimes large numbers of small fish swim closely together and maneuver in irregular patterns to avoid or confuse larger predators it is called:
a. transparency.
b. camouflage.
c. schooling.
d. countershading.

15. The goal of Fisheries Management is to:
a. provide regulation, education, enforcement, and create self-sustaining ecosystems.
b. reduce the number large predatory fish.
c. hunt and remove predatory sea mammals.
d. none of the above.