Ice Ages of the Pleistocene Epoch

The Pleistocene Epoch began about 2.56 million years ago. This Pleistocene ice ages are linked to climate changes cause by many factors resulted in the cyclic expansion of continental glaciers in the polar regions of both hemispheres. Important factors that may have helped initiate the ice ages may be related to plate tectonics.

Studies of ice cores from Antarctica, Greenland, cores samples derived from ocean sediments, and studies of glacial deposits found on land indicate that there may have been as many as 20 glaciation periods starting during the late Pliocene through the Pleistocene Epochs (during the last 3 million years). Figure 9.30 shows evidence of glaciation cycles for the last 650,000 years based on studies of greenhouse gases preserved in ice core taken from the Greenland Ice Sheet.

The rise and fall in sea level is preserved in sediments deposited in restricted coastal and marine sediments. These sediments are well exposed in many places allowing paleoclimate scientist to evaluate the sedimentary record in many locations (such as at Ft. Funston sea cliffs near San Francisco, CA, Figure 9.31). Some of these cycles were more intense than others, and they impacted regions around the world differently. Each of the glaciation cycles was followed by an interglacial warming period in which the continental glaciers retreated (or melted back). We are currently in one of the interglacial warm periods (although it wouldn't feel like that in Greenland or Antarctica where glaciation is still occurring). 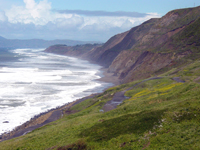 Figure 9.31. The sedimentary record preserves evidence of numerous glaciation cycles. A famous, well-studied location where a record of sea level changes during the ice ages are well preserved and well in Quaternary-age sediments exposed is in the sea cliffs at Ft. Funston Beach near San Francisco, California.

• Prior to the ice ages, the passages between the Arctic Ocean and the Pacific and Atlantic Oceans was more open, allowing unhindered ocean circulation between the regions.
• Before about 3 million years ago there was open circulation between the Pacific and Atlantic ocean basins. Plate convergence caused the formation and rise of the Isthmus of Panama, shutting off open tropical ocean circulation between North America and South America.
• The plate convergence of the Indian subcontinent with Asia caused the rise of the high and extensive Himalayas and Tibetan Plateau, causing significant defection of the Earth's atmospheric circulation patterns.
• The interactions of global plant cover, global cloud cover (and precipitation), polar sea ice, and impacts of massive volcanic eruptions may all have possible influence on glaciation cycles.
• Other changes in regional and global atmospheric and oceanographic circulation patterns may have been factors. The rise in CO2 concentrations in the atmosphere over the past century add to the complexity of interpreting the causes of the current rise in global temperatures.

The total number, extent, and duration of Pleistocene glaciation cycles is unclear. This is because erosion subsequent glaciation cycles largely destroyed evidence of previous glaciations. In addition, glaciation in one region was not exactly synchronous with other regions. This is illustrated by the fact that the last major glaciation cycle ended about about 11,000 years ago, yet both Antarctica and Greenland are both still experiencing ice-age conditions. Current data suggests that there may have been as many as 20 glaciation cycles in the last 2 million years or so. At least 4 of them were major glaciation cycles that are well preserved in continental glacial sediment deposits exposed in parts of central North America (more cycles are recorded in ocean sediments).