Our atmosphere is the gaseous mass or envelope surrounding the Earth, and retained by the Earth's gravitational field. Other planets and moons in the Solar System have atmospheres. The atmosphere plays many important roles in moving water in the world's ocean basins, and for supporting life on Earth!

Figure 8.1. Layers of the Earth's atmosphere as seen from space.

Structure of the Atmosphere

The Earth's atmosphere is subdivided into levels (Figure 8.2): 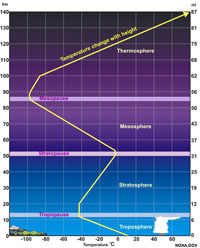 Energy Transfer Through the Atmosphere

The amount of energy coming into the Earth from the Sun is equal to the energy reflected and radiated back into space. The atmosphere, oceans, and land absorb and release energy. Living things also absorb and release energy. Some of the energy stored in organic matter is preserved when it is buried in sediments. Geothermal energy is also a trace of the energy radiated into space. The rate of energy transfer also varies due to cloud cover and ice and snow coverage.

Incoming solar radiation involves all wavelengths of the electromagnetic spectrum. Figure 8.3 shows the wavelengths and intensity of solar energy striking the top of the atmosphere and the energy reaching the surface. The atmosphere is transparent to most wavelengths, but part of the solar spectrum are absorbed by certain greenhouse gases in the atmosphere including water vapor, carbon dioxide, ozone, methane, and other gases. Shorter wavelengths (UV and blue light) is diffused in the air—making the sky blue. Longer wavelengths are less diffused—making sunsets and sunrises red (Figure 8.4).

Composition of the Atmosphere