The following sections of this chapter is a review of major geologic events, biological evolution, and selected important concepts related to Earth history, starting with the most ancient events and appearance of life forms in the fossil record and leading to the Present.

The Precambrian encompassed all of early Earth history and rocks from that time preserve evidence of the evolution of life forms on a microbial level. In biology, cell theory states that a cell is the fundamental structural and functional unit of living matter, and that the an organism a multicellular body composed of autonomous cells with its properties being the sum of those of its cells. Multicellular organisms (animals and plants) do not appear in the fossil record until late in Precambrian (Late Proterozoic) time.

The Phanerozoic Eon began after the end of the Proterozoic Eon about 540 million years ago, and marks the change when fossil remains of multicellular organisms began to appear in great abundance in the fossil record (discussed below).

Early Evidence of Life on a Global Scale

Banded-iron formations (BIFs) are sedimentary mineral deposits consisting of alternating beds of iron-rich minerals (mostly hematite) and silica-rich layers (chert or quartz) that formed about 3.0 to 1.8 billion years ago (Figure 2.16). Theory suggests BIFs are associated with the capture of free oxygen released by photosynthetic processes by iron dissolved in ancient ocean water. The ancient oceans were enriched in CO2 (just like the atmosphere). Iron easily dissolves in CO2-rich water — this is easy experiment to illustrate: drop and iron nail in a bottle of soda and it will dissolve completely in a few days! The early oceans must have been rich in iron (similar to salt is today)! Once nearly all the free iron dissolved in the ancient seawater was consumed, oxygen could gradually accumulate in the atmosphere. Once enough oxygen was free in the atmosphere, an ozone layer could form.

BIF deposits of Precambrian age are preserved in many locations around the world, occurring as massive and widespread deposits, hundreds to thousands of feet thick. The BIFs we see today are only remnants of what were probably every greater and more extensive deposits. During Precambrian time, BIF deposits probably extensively covered large parts of the ancient global ocean basins. Today, BIFs are the major source of the world's iron ore and are found preserved on all major continental shield regions. 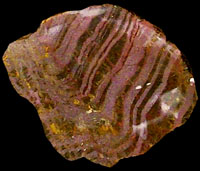 Cell Theory dictates that all known living things are made up of one or more cells (the fundamental structure and functioning living unit in all living things. All living cells arise from pre-existing cells by processes involving cell division.


Eukaryotic cells contain cytoplasmic organelles or a cytoskeleton, and contain a nucleus in which the genetic material is separated from the cytoplasm. Eukaryotes include fungi, plants, animals, and some unicellular organisms. Eukaryotic cells are capable of sexual reproduction (Figure 2.17).

The same basic molecular processes are involved in the lives of both prokaryotes and eukaryotes, suggesting that all present-day cells are descendant from a single primordial ancestor.

Endosymbiosis is a theory that suggests organelles evolved in eukaryotic cells and occurred when one type of cell became incorporated into another type of cell, creating a symbiotic relationship to the benefit of both (such as chloroplasts in plants, and mitochondria in animals).

Viruses are non-living organic structures capable of genetic self replication that are not classified as cells and are neither unicellular nor multicellular organisms; viruses lack a metabolic system and are dependent on the host cells that they infect to reproduce. Viruses likely have influenced evolution on a cellular level in Precambrian time, just as they impact species evolution today.

A stromatolite is a mound of calcareous sediment built up of layers of lime-secreting cyanobacteria (blue-green bacteria, algae and other more primitive eukaryotic life forms) that trap sediment, creating layers accumulations (Figure 2.18). Stromatolites are found in Precambrian rocks and represent some of the earliest known fossils. Stromatolites are known from all geologic time periods and are still occurring today, with exceptional examples resembling ancient life forms still being formed today in places like Shark Bay, Australia (Figure 2.19).

Evidence of the first sexual reproduction appear in the fossil record about 1.2 billion years ago. Many eukaryotic organisms including protista (both unicellular and colonial forms), fungi, and multicellular organisms (including plants and animals) reproduce sexually.

Metazoans are multicellular animals that have cells that differentiate into tissues and organs and usually have a digestive cavity and nervous system. Metazoans appeared on Earth in Late Precambrian time (Late Proterozoic Eon) consisting of cells that with growth would differentiated into unique tissue or organs used for special purposes, such a locomotion, feeding, reproduction, respiration, tissues able to sense the environment, etc.

Late Precambrian life forms have been discovered, but fossils from this period are scarce and poorly preserved because they did not contain hard parts (skeletons, teeth, etc.). Impression is sediments are dominantly trace fossils (tracks, trails, resting and feeding traces) and rare body impressions have been found.

A group of ancient fossil organisms called the Ediacaran fauna is one of the earliest known occurrence of multicellular animals is the fossil record. They were named for the Ediacaran Hills of South Australia where they were first discovered. Traces of Ediacaran fauna has been found worldwide in sedimentary rocks of about 635 to 541 million years (very late Precambrian age) and consisted of frond- and tube-shaped, soft-body organisms, mostly sessile life forms (sessile meaning attached to the seabed). Many of the fossils from this time period share similar characteristics of some families or classes of organisms still found on Earth today (including segmented worms, jellyfish, chordates, and other invertebrates).