Vesuvianite takes its name from Mount Vesuvius, the famed volcano in Italy, where the mineral was first found; it was named in 1795 by the famous mineralogist Abraham Gottlob Werner. The French mineralogist Rene Just Hauy suggested it should be named Idocrase four years later. Werner’s name takes precedence.

Cyprine is a blue copper-containing variety of vesuvianite that was first described from Norway about 1821 by the famous mineralogist Berzelius; the name is derived from Cyprium, the ancient term for copper.

Californite is a compact massive form of vesuvianite that has an appearance to poor quality jade. It has historically been used as a jade simulant. It was first described by famed gemologist George Frederick Kunz in 1903, who suggested the name “californite” in honor of the state in which it was found. Dietrich (2005) offered the following opinion: “With all due regards to G.F. Kunz, I believe that… vesuvianite would have gained more "prestige" in gemology if the term californite had never been introduced.” He added “…the use of any gem material as a simulant serves only to denigrate its use under its own name.” Californite has also been called “American Jade”, “California Jade”, and “Vesuvianite Jade”. Any usage of names for vesuvianite which include “jade” should be discouraged.

Ca10Mg2Al4(SiO4)5(Si2O7)2(OH)4 often containing trace to minor amounts of iron, copper up to 2.1% as Cu in cyprine), chromium, manganese, titanium, boron or beryllium.

Under magnification, the cyprine variety may exhibit a distinctly fibrous appearance.

Uniaxial (+) or Uniaxial (-); biaxial vesuvianite has been observed.

Antimony rich vesuvianite have RI indices at the higher end of the range with a birefringence of 0.020. 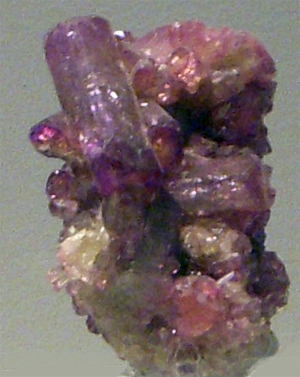 Figure \(\PageIndex{2}\): Rare violet colored vesuvianite crystals from the Jeffrey Mine described below

The Jeffrey Mine in Asbestos, Quebec has afforded facet rough that is predominantly yellow-green in color, similar to peridot; the mine has also produced an emerald green chrome-bearing vesuvianite and a violet to magenta manganoan vesuvianite that is sometimes called “manganovesuvianite” (this term is too close to the name of a different, non-gem mineral species, “manganvesuvianite” for comfort and should be discouraged). Bicolored facetted stones consisting of yellow-green common vesuvianite on one side, and pale magenta manganoan vesuvianite on the other, have been cut. Italy – most notably Bellecombe in Val d’Aosta has produced greenish-brown to brown faceting rough. During the past decade, Fushan, Hebei Province, China has produced moderate quantities of deep yellow-brown (sometimes called “root beer”) colored crystals with gemmy areas capable of being facetted and cut en cabochon. Kaiiado District, Rift Valley Province, Kenya has produced greenish-yellow to yellowish-green vesuvianite faceting rough.

Cyprine- The original Norwegian find was of no interest as a gem material, but a significant quantity of cyprite was uncovered in 1922 during mining at Franklin, New Jersey, about 850 feet underground. Reports have been made of facetted specimens of cyprine from Sri Lanka, Jakobsberg Mine, Värmland, Sweden, and Pakistan; all are a pale blue tinged with grey.

Californite- Northern California has produced Californite at several locations, including Happy Camp in Siskyou County, the Pulga Deposit on the North Fork of the Feather River, Butte County, and Tulare County.