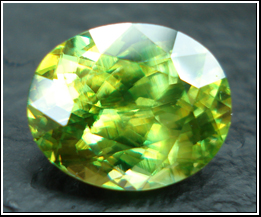 Sphene is the older name of this mineral which refers to its crystal shape. Titanite is the universal name amongst mineralogists today and refers to its content of titanium. Greenovite is the name given to red or pink sphene. Gemologists use the name sphene for gem material titanite.

Wedge-shaped crystals that may show parting due to twinning. Less common massive or lamellar. Sphene is normally fine-grained but occasionally forms large crystals.

Sphene may show some degree of metamictization.

A strong doubling of facets is seen in cut stones.

Due to its small to moderate 2V value (17-40°) a clear biaxial interference pattern may be seen (two melatopes visible in one image).

Sometimes a spectrum can be seen.
Mean absorption lines: 586, 582. Sphene may show (weak) rare earth spectra due to didymium.

Sphene is changed to red or orange through heating.

Sphene is a common and widespread mineral in many igneous rocks and metamorphic rocks. Associated minerals are pyroxene, amphibole, feldspar and quartz.

Facet-grade sphene was found in Mulla Ghani Baba in Mohmand Agency, NW of Peshawar, Pakistan, in 2004. The color of this sphene is medium to dark brown, and a significant 'red flash' was notable in the faceted gems. In Badadkshan, Afghanistan, sphene was also found in 2004. The color of Afghan sphene is greenish-yellow. While India also produces fine sphene, Madagascar remains the main source for facet-grade sphene. While brown stones from Madagascar can be large, the green stones are most prized by gem collectors and connoisseurs.