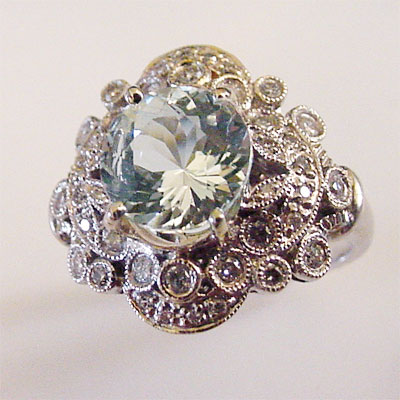 Jeremejevite is a rare borate mineral which was discovered in the late 19th Century by a Rusian mineralogist named Pavel Jeremejev.
The known localities for the mineral are:
-Mt.Soktuj, Transbaikal, Russia
-Cape Cross, Swakopmund, Namibia
-The Eifel volcanic area of Germany
-Southwestern Pamirs
-The Fantaziya and Priyatnaya Pegmantite veins of the eastern Pamirs in Tajikistan

The optic character of jeremejevite as been the subject of several contradicting reports.
Webster (1994)describes jeremejevite as an hexagonal crystal with a uniaxial negative optic character in his Identification Tables, however in the text of the same book, he refers to it as an orthorhombic crystal with a biaxial optic character.
Liddicoat (1973) although referring to jeremejevite as uniaxial negative, claimed it has the gem showed evidence of being biaxial with a small 2V angle.
The anomaly was explained by Foord in 1981.
The difference in optic character is a growth phenomenon! The crystal character of the inside of the crystal is different from that of the outside of the crystal. And to further complicate the situation, this difference in optic character, from core to rim, is not consistent. Specimens from one locality can display uniaxial cores with biaxial rims and specimens from another locality can display the opposite character.

Although, atypical of inclusions normally found in jeremejevite, the predominate inclusions found in the Namibian gem featured in the ring above were hollow tubes. 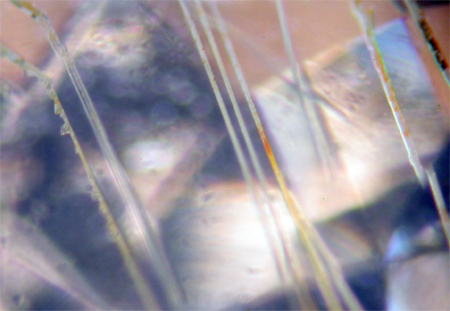 Figure \(\PageIndex{2}\): Hollow tubes; some filled with a residue; some bearded.