Spinel is a mineral group. For many centuries, most gem spinels were misidentified as sapphire or ruby because they have similar properties and occur in the same geological deposits. The historically significant 5.08 centimeter "Black Prince Ruby" in the center of the British Imperial Crown was only recently identified as a spinel. This stone is irregular in shape and has a somewhat squareish outline. Additionally, it was not faceted, merely polished. Spinels also occur in a vast array of colors. They are slightly softer than sapphires but still very durable.
The earliest known use of spinels was as ornaments found in Buddhist tombs in Afghanistan. Blue spinels have been found in England, dating back to the Roman occupation (51 BC to 400 AD).

Most of the above series members are rare in nature with the exception of the members of the spinel series, magnetite and chromite. To gemologists common spinel and gahnite are of most interest.

When gemologist refer to "spinel", we usually imply common spinel, that is the spinel that belongs to the spinel series of the spinel group.

Spinel can be confused with many stones by appearance alone, yet optical properties usually rule out most of them.
As spinel belongs to an isomorphous series, the optical and physical properties may vary.

Spinel is allochromatic and variety colors are produced by transition metals:

Spinel is isotropic and the refractive index of common spinel is generally around 1.712 to 1.720. Red spinel can have a refractive index up to 1.74.
The only other isotropic gemstone that falls within this range is grossular garnet, but it will usually be higher and the color is also different.
Other members of the spinel series, such as gahnite will have higher refractive indices.

All other gemstones can easily be separated from spinel by their optic nature.

As with the refractive indices, the specific gravity of spinel can vary due to isomorphous replacement.
The values for most gem grade material lies between 3.58 and 3.61. Pleonaste has a S.G. between 3.63 and 3.90.
Gahnospinels may have a specific gravity up to 4.06.

Common spinel is isotropic and will remain dark under crossed polars.
Verneuil type synthetic spinel will, with the exception of the red variety, show strong anomalous birefringence due to excess Al2O3 (see synthetics). This anomalous extinction (as it is currently named) is known as "tabby" extinction, resembling the color distribution of a tabby cat's fur pattern, or/and as an Andreas cross caused by pseudo-birefringence. The cause of this tabby extinction is the excess alumina when compared with the natural.

Natural and flux-melt synthetic spinel may show weak anomalous extinction. When examined under magnification, this can often be seen to relate to be crystallographically related, where the light areas form parallel zones.

Figure \(\PageIndex{2}\): Spectrum of a natural blue spinel, colored by iron and minor traces of cobalt.

Like any gem, spinels that contain surface-reaching fissures may have those fissures filled with a colorless or colored oil/resin/glass to reduce their visibility. Filled spinels are becoming more and more common as the price of this gem increases.

Various reports have indicated that gem treaters are experimenting with heating spinel to improve its appearance. As of 2012, only slight changes have been reported. Most of the change after treatment appears to be due to a slight improvement in the clarity of certain specimens. Heated spinels can be identified by reference to a broadening of the Raman line width at 405 cm-1 and by the R-line width in fluorescence.

Spinel is synthesized by the Verneuil (flame-fusion), the flux-melt and Czochralski (pulling) methods.

Flame fusion synthetic spinels have been produced since 1908 (by accident while creating synthetic corundum) but were not commercially available until 1930.

In natural spinel, the ratio of MgO to Al2O3 is 1:1. With the Verneuil synthetic, it was found that if boules were grown in a 1:1 ratio, they would easily fracture and no reasonably sized gemstones could be cut. By changing that ratio to 2:1 (i.e., by doubling the amount of alumina), large, clean boules could be grown.

Because the chemical formula of the Verneuil synthetic no longer matches the natural stone, it is not a true synthetic, but is generally accepted as such. Sometimes these synthetics are termed "beta corundum," due to the excess of alumina.

The result of this additional alumina in the Verneuil synthetic is an elevated refractive index (1.727), specific gravity (3.64) and "tabby" extinction between crossed polars.

When red spinel was grown at a 2:1 ratio, the boules cracked, and so were not commercially produced. A small amount of red spinel has been grown by the Verneuil process in a 1:1 ratio. Faceted stones are generally less than two carats, as the boules were heavily fractured. The few red synthetics that are created through the Verneuil process will generally show curved growth lines, even more obvious than their synthetic corundum cousins.

Larger synthetic red spinels have been grown with the flux-melt method.

A synthetic spinel imitation of moonstone was also once manufactured. It was made in a 1:3 ratio, with the excess alumina unmixing to produce a schiller-like effect. These stones sometimes feature a mirror-like coating on the flat cabochon base to enhance the effect. The RI is 1.728 with an SG of 3.64.

For a brief time, a lapis lazuli imitation was made by sintering a synthetic spinel powder together with cobalt. In a strange twist, tiny bits of genuine gold were sometimes added to simulate the "fool's gold" (pyrite) of natural lapis lazuli. The RI is 1.725, SG is 3.52, with a strong cobalt absorption spectrum.

A star spinel has also been synthesized, featuring a 4-rayed star.

First commercial production of flux-melt synthetic spinel started around 1980, although successful experiments date back to 1848 (by the French chemist Ebelmen). As of 1989 larger volumes of this synthetic appeared on the market, produced in Novosibirsk, Russia.

Apart from red, blue synthetics have also been produced by the flux-melt process. These are true synthetics, manufactured with a 1:1 ratio of magnesia to alumina, just like natural spinel. As a result, they will show identical RI's, SG's and polariscope reactions.

Tabby extinction is also seen in these synthetics. Careful observation of inclusions is the main means of separation for red stones. Blue flux-melt synthetics can also be distinguished by the spectrum.

A recent development (2007) is the production of red to pink synthetic spinels by the Czochralski pulling method.

Figure \(\PageIndex{3}\): Apatite inclusions and their star-like outgrowths along the 60-degree hexagonal plane - looking much like stellate dislocation systems, in a cobalt blue spinel.
Photo courtesy of John Huff, gemcollections.com 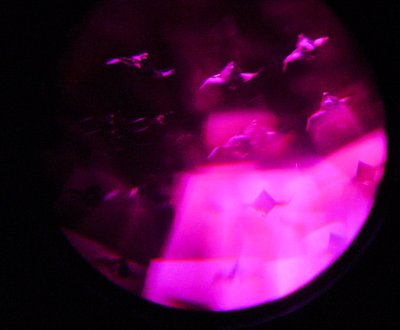 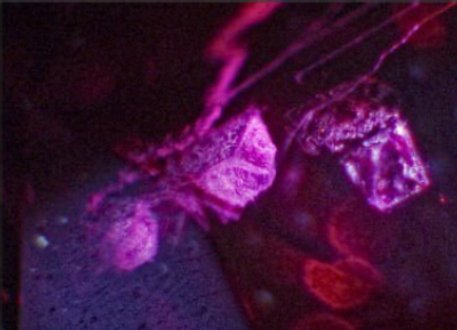