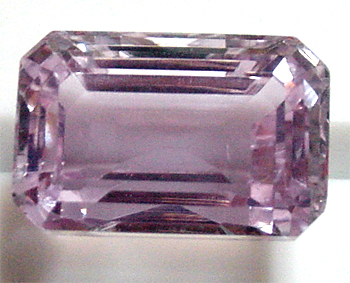 Kunzite is the pink, lilac or violet variety of the mineral spodumene. It is a lithium aluminum silicate named after the famous gemologist George F. Kunz, who was the first to identify it. Kunzite was first found in Connecticut. But the first commercially significant deposit was discovered in 1902 in the Pala region of California, where morganite beryl was also first discovered. Kunzite is often found in association with morganite and pink tourmaline, the other popular pink gemstones. Today, most kunzite is mined in Brazil, Afghanistan, and Madagascar. The largest faceted kunzite is an 880ct specimen on display at the Smithsonian Institution in Washington D.C. Although kunzite for jewelry use is several levels of magnitude smaller, kunzite shows the best color in larger sizes. Stones should be at least ten carats to be really "in the pink".
Unfortunately, most kunzite fades in sunlight so it should ideally be worn at night. It is a highly dichroic gem, meaning that it appears two different colors, depending upon which direction you view it. In one direction, it will appear pink, violet or lilac, and in the other direction, it will appear colorless. Therefore, it is important to cut it so that the direction of most intense color is visible in a face-up direction.