Hiddenite is the yellow to green variety of spodumene.

It was originally discovered in Hiddenite, North Carolina.

The first specimens of the hiddenite variety of spodumene were recovered about 1879 in the tiny settlement of White Plains, west of Stony Point, Alexander County, North Carolina. According to contemporary accounts, a young man named Lackey brought them to the attention of J.A.D. Stephenson, a local merchant who was also an ardent collector of mineral and archaeological specimens (Anonymous, 1885). Stephenson had posted a reward for any and all interesting specimens brought in by local farmers, among which were included “green bolts” (the emeralds for which the region would later become renowned) and yellowish green transparent crystals which were found loose in the soil with the emeralds. Initially, the yellowish to greenish-yellow hiddenites were thought to be gemmy diopside, and Stephenson sent the specimens to Norman Spang of Pittsburg, PA, a prominent US mineral collector of the era. Soon afterward, Stephenson brought the discovery to the attention of William Earl Hidden, who had been commissioned by Thomas Edison to search for any sources of platinum in North Carolina (an effort that was, in and of itself, stunningly unsuccessful). Hidden sent samples of the odd green material to John Lawrence Smith, a prominent chemist and mineralogist of Louisville, Kentucky. Smith correctly identified the specimens as being Spodumene and named them “Hiddenite” in honor of Hidden. Smith's analysis of hiddenite did not note the presence of chromium; two years later, Friedrich A. Genth, Pennsylvania's State Mineralogist, published an analysis of hiddenite which detected chromium as 0.18% chromium oxide (Genth, 1883). During the hey-day of hiddenite mining in the 1880s and 1890s, it was also known as “lithia emerald”.

Hidden recognized the value of the emeralds and the potential of the new gemmy green spodumene. He acquired a tract of poor quality land from J Washington Warren, which was either the site of the initial discovery or near to it, for $1500 (the sale price was approximately three times the value of the land). The Emerald and Hiddenite Mining Company was organized and excavations on the site quickly recovered loose hiddenites and emeralds in the red, gravelly clay. At a depth of about 26 feet they struck bedrock and soon were uncovering hiddenites from solid rock. Oddly, period newspaper accounts and statements by Kunz (1892) indicate that mining on the site was never undertaken as a full-time operation, but was only prosecuted a few weeks or months during the summer. Writing in 1892, Kunz described the hiddenite being recovered as “always transparent, ranges from colorless (rare) to a light yellow, into a yellowish green, then into a deep yellow emerald green. Sometimes an entire crystal has a uniform green color, but generally one end is yellow and the other green.” He added “The yellow color exhibited by the mineral in even the darkest green gems will prevent it from competing with the emerald, since it is this very quality that has kept down the prices of the Siberian demantoids or Uralian emeralds as the green garnets are variously termed. Dr. J Lawrence Smith says that the crystals, when cut and polished, resemble the emerald in luster, though the color is not so intense as in the finer variety of the latter gem. Prof. Edward S Dana says that, owing to its dichroism, it has a peculiar brilliancy which is wanting in the true emerald.” Kunz noted that the finest crystal recovered prior to 1892 measured 68 mm tall, and could have cut a gem of 5.5ct estimated weight. The size of most cut gems were small, with a 2ct hiddenite in the Augustus C. Hamlin collection being considered among the finest of the large stones. Between 1880 and 1888 approximately $7,500 worth of Hiddenite was produced, with values ranging from $40 to $100 a carat (1892 US dollars).

Hiddenite is a Type I stone in the GIA clarity grading system meaning it is usually eye-clean.
Typical inclusions are: 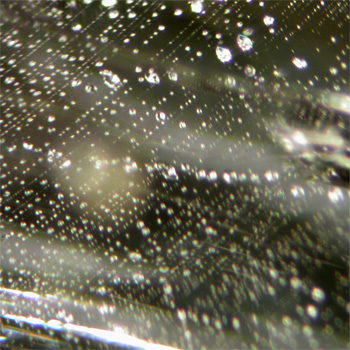 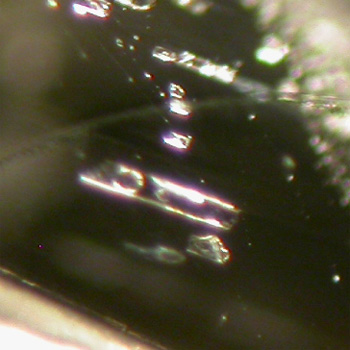