Tanzanite, a variety of zoisite, was discovered in the Merelani district of Tanzania near Mount Kilimanjaro in 1967. So far, all tanzanite discovery has been limited to a six-kilometer strip in this area, which was divided into four blocks, labeled A, B, C and D. Block C is the only site still commercially producing rough tanzanite at this time.

Almost all purple and blue varieties of the stone are the result of heat treatment. The stone is a yellowish-brown "bug juice" color when it is mined, but when heated to between 426.7-482.2 degrees Celsius, it becomes that gorgeous violet blue that is used in jewelry. The stone has never been found in another locality, so it is indeed a depleting resource. It is somewhat soft (6-7 on Mohs scale of hardness) and has a direction of cleavage along which it can be easily broken. It is desirable because of its elegant, opulent color.

Tanzanite can be confused with sapphire. Interference figure, refractive index, and specific gravity can easily separate tanzanite from sapphire.

Violet blue to blue to bluish purple. The color is due to vanadium.
Someone once described the color of tanzanite as "Tanzanite looks like sapphire wishes it could look" [Wise, 2003].

Tanzanite is a type I stone on the GIA clarity scale and is usually not included.

Other stones falling in this range are:

Natural tanzanite does occur and it exhibits strong trichroism. The typical colors are violet to purplish red, blue and green (the green portion may also be yellow).
Most tanzanite on the market is heated brownish zoisite and shows two distinct colors under the dichroscope: violet to purplish red and blue. There will be two shades of blue, so the stone is still considered as trichroic, but the yellow or green is not observed in these heated stones. For that reason, it is often referred to as being dichroic.

Tanzanite is relatively soft on the Moh's scale (6½) so care should be taken not to scratch it. Due to its perfect prismatic cleavage it can easily break when hit with a hard and/or sharp object.

Usually, Tanzanite is heat treated to remove the yellow-green to brown components. Heating is usually conducted at temperatures between 400 and 600 degrees centigrade. As Tanzanite's color largely depends on the ratio of Vanadium and Titanium within its crystal structure, any changes to this delicate balance have a marked effect on its color. Heating results in a valence exchange reaction or redox reaction which causes an increase in the violet and blue colors and renders the Titanium colorless. The image below shows Tanzanite crystals before and after heating. 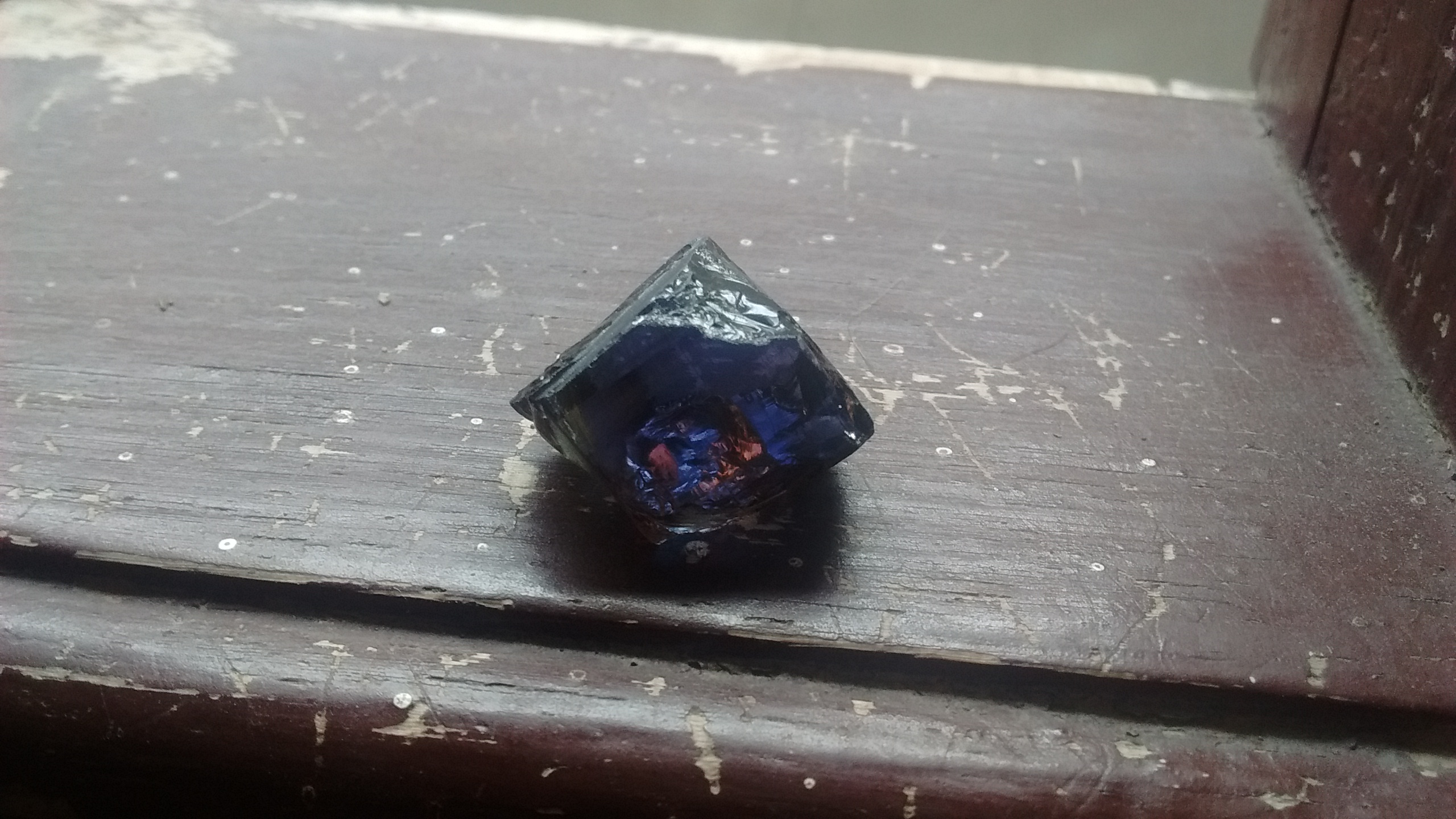 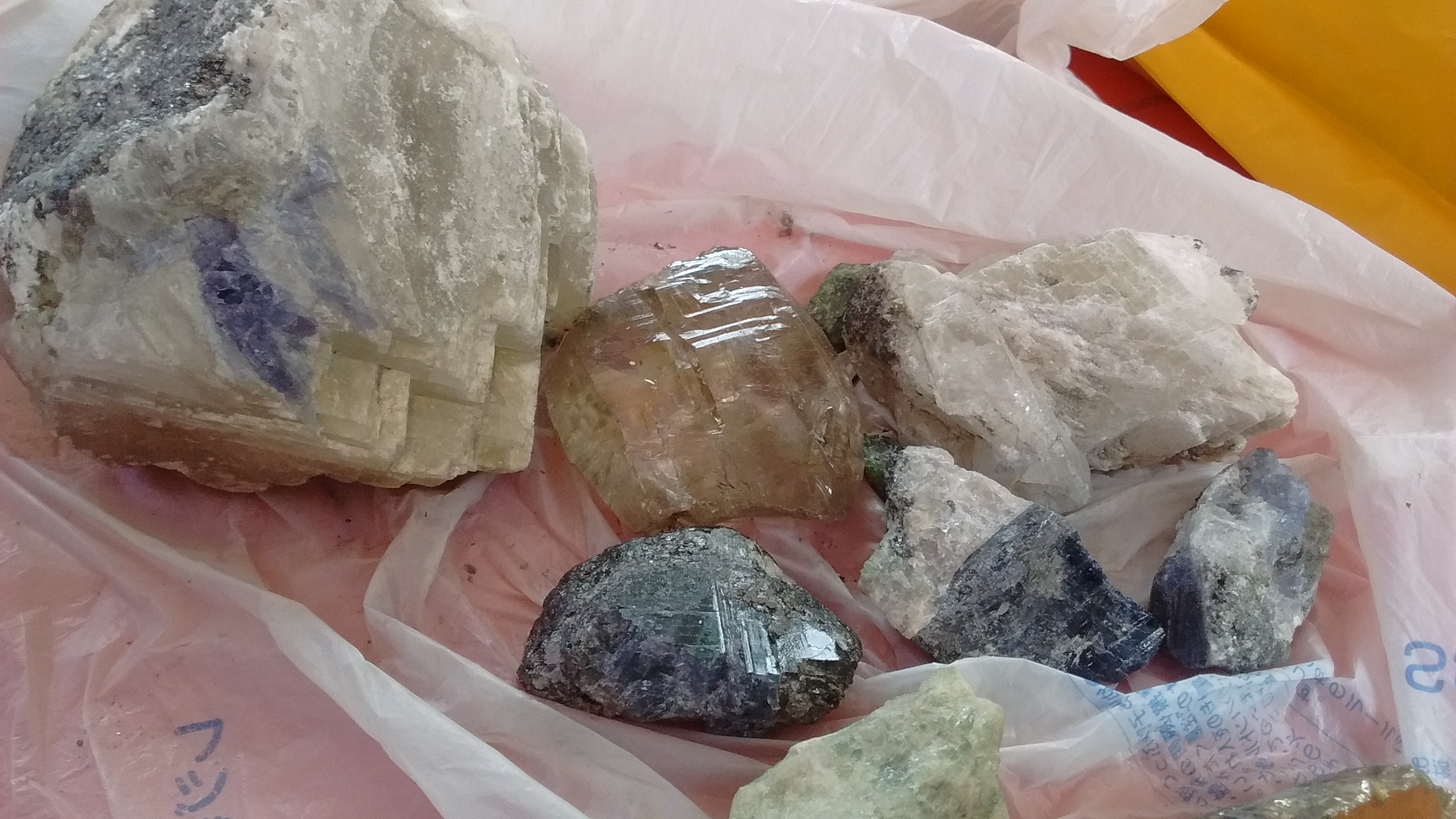 None known (although there are rumors of a synthetic tanzanite being created in Russia).

Most stones that are used to simulate tanzanite can easily be separated by optical properties and/or the use of a Hanneman Tanzanite Filter.