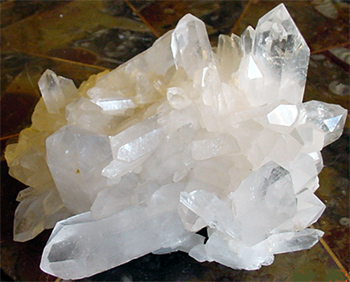 Rock Crystal is the common name for colorless quartz. The material is abundant and has been used for centuries as a gem. Quartz crystals are among the earliest talismans. Examples of rock crystal objects date back to 75,000BC. Every culture on the planet has attributed magical power to quartz crystals. The Ancient Greeks prized rock crystal and believed it to be water frozen by the gods to a state of perpetual solidity. They carved the material into seals and intaglios. The Japanese considered it "the perfect jewel", symbolizing patience and perseverance, the infinity of space and purity. Native Americans used quartz crystals as a hunting talisman and "fed" them with deer's blood. 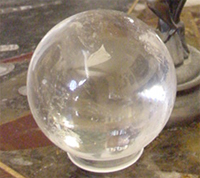 Crystal balls were brought to Europe from the Near East by the Crusaders. They were credited with the ability to cure diseases. In Scotland and Ireland, farmers used crystal balls to keep livestock healthy. Today, crystal balls are still used for mystical divination, gazing and New Age healing. They vary in size ranging from small beads measuring a few millimeters in diameter to the largest known crystal ball in existence. It is displayed at the Smithsonian Institution in Washington, D.C. It is called the "Warner Crystal Ball." This specimen has a weight of 48.5 kilograms and a diameter of 32.5 centimeters.