Amethyst is a purple variety of the mineral quartz. It occurs in all intensities of the color purple from a light pastel to a depth of royal splendor. Until the beginning of the 20th century, it was quite rare and costly. When vast deposits were found in Brazil, amethyst became very accessible and affordable. Amethyst has always been linked to the thinking process, ensuring clarity of vision. It inspires creativity, courage, and valor. Amethyst has been successfully synthesized in the lab, so buyers need to be sure their source is qualified to separate natural from lab-grown material.

Amethyst is a type I stone in the GIA clarity grading system is usually free from eye visible inclusions. Typical inclusions visible with magnification are: 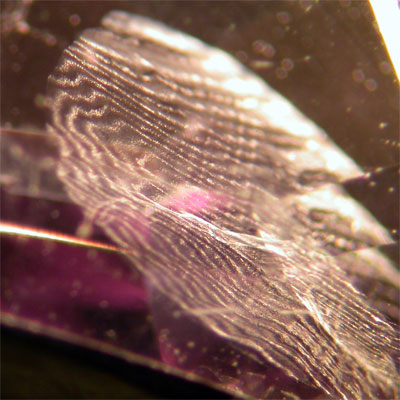 With the use of a polariscope, one can find the typical "bull's eye" for quartz, but that can be seen in both twinned natural stones as in many twinned synthetics.

To discern the hydrothermal (twinned) synthetics from natural amethyst one must look at the interference figures of the stone without a conoscope. In natural, twinned, amethyst one will see a pattern known as "Brewster fringes". This can be seen when looking down the optic axis of the gem and on lateral rotation, this pattern quickly disappears. With the twinned hydrothermal stones these fringes are not seen in the typical triangular form, rather they follow the outline of the stone. On lateral rotation, this image will be in view much longer. This method works in most cases, for the remaining 1% to 3% one will need to infrared spectrometry to discern between the two.

Immersion in a liquid and magnification might aid greatly in spotting the "Brewster fringes".