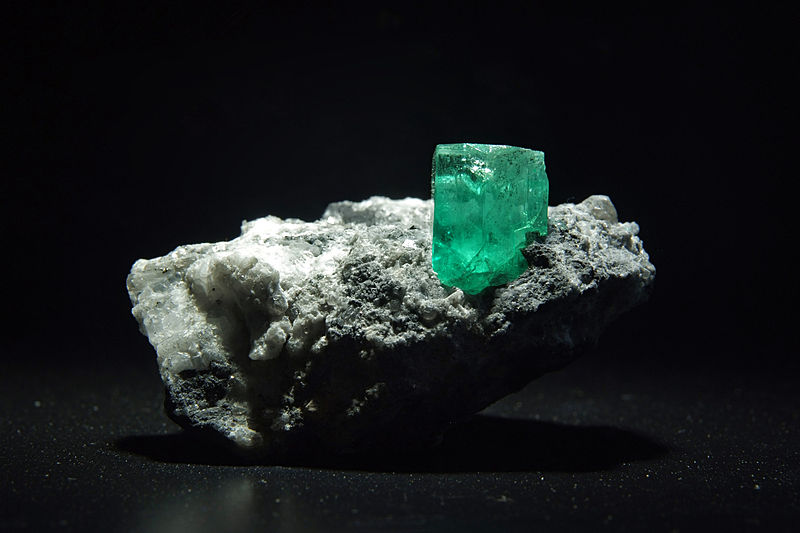 The trained eye should have little trouble recognizing an emerald due to its silky rich green color. The main challenge, however, is distinguishing natural emerald from the various types of synthetic emerald.

Emerald is the chromium-bearing variety of beryl with a "grass green" primary hue and a slight yellow or blue secondary hue. The purer the green, the finer the quality of the stone. In 1960, H. Espig described the color of emerald as " .. warmen Grün einer Wiese im Frühling .." (warm green of a meadow in spring).

There are two other varieties of beryl that are also green, vanadium beryl and green beryl. Vanadium beryl is also known as "vanadium emerald" and can exhibit colors like the chromium-bearing cousin, but is usually much less included. It should be noted that there are two schools of thought on whether the vanadium-colored emeralds are entitled to be called emerald. "Green beryl" is a pale green beryl that shows more resemblance to aquamarine and is colored by iron. One will hardly ever confuse green beryl with emerald -- unless you are at the selling end of the market.

Tsavorite garnet is a gemstone that comes close to emerald in color but has a much "harder" color than the chromium-colored emeralds.

Emerald is classed as a "Type III" in the GIA clarity grading system. This means that these stones are commonly included, and the inclusions are mostly visible to the trained eye. Only a few emeralds are "eye clean".
In general, eye-visible inclusions in emerald are forgiven if the stone shows good color and transparency overall.

With a 10x loupe or a microscope at low magnification, typical inclusions are seen which often give vital clues about the stone's origin, being it locality or natural/synthetic.

Natural chromium-bearing emeralds will usually show a distinct spectrum with a doublet in the red, two lines in the orange-red region and a weak band in the yellow part.
Synthetic emerald shows the same absorption pattern with the addition of a line in the blue (at 477 nm). However, this line may also be seen in fine quality natural emerald.

It should be noted that emerald is known to show different absorption spectra along the ordinary and the extraordinary vibrational directions.

The Chelsea Colour Filter was designed to discriminate between emerald and its simulants in the 1930s, primarily to detect chromium in Colombian and Siberian emeralds. Over the years, it lost that usefulness because of the arrival of synthetic emeralds. As synthetic emeralds are also colored by chromium, this tool is no longer very reliable. This is especially true now we know that vanadium and iron may also be an emerald's coloring agent as well.

The chromium will cause fluorescence in natural daylight, but the iron content that is present in emeralds from certain locations dulls or totally suppresses that. Hence, there will be a different (not red) reaction to the Chelsea Filter.
In the past, it was suggested that if an emerald would light up bright red under the CF, the stone would either be of Colombian origin or be synthetic. In other words, all synthetics will show up bright red due to rich chromium content. This is no longer viable, as iron may be introduced into the synthesizing process to mimic a more natural fluorescence reaction.

The use of the "Emerald Filter" set may be useful as an addition to the Chelsea Colour Filter.

Enhancement of emerald to mask inclusions is regarded as routine. About 90% of all emeralds on the market have undergone some kind of treatment.
Most common enhancements are oiling, waxing or impregnation with materials that have a RI close to that of emerald. Opticon is a brand name for one substance used to impregnate emerald. In Columbia, cedarwood oil is utilized in the treatment process to minimize the appearance of fissures and other inclusions which impair the clarity of the emeralds.

While very rare, cat's eye emeralds do exist. Another phenomenon, found in Colombian emeralds, is the trapiche emerald which displays a six-armed, fixed star. This is not to be confused with asterism.

Emerald can be synthesized by different methods. The most common synthetic emeralds on the market today are of hydrothermal and flux-melt origin. The coloring agents of synthetic emerald vary by manufacturer.

Most simulants of emerald, such as tsavorite and glass, should be easily detected with the unaided trained eye. There are unfortunately also doublet and triplet imitations on the market that may be similar in appearance to emerald.

Ron Ringsrud Takes Us to the Emerald Mines of Colombia