Ruby is the red variety of the mineral corundum. When corundum occurs in any other color it is referred to as sapphire. Rubies are mined primarily in Burma, Sri Lanka, Thailand, Cambodia, Vietnam, Kenya, Tanzania, Mozambique, Madagascar, India, Afghanistan, and Tajikistan. More important than the gem's locality of origin is the actual color and clarity of the stone. Rubies that are the most valuable will be pure red in color, without any modifying tones of violet, orange or brown and are transparent in clarity. A fine ruby is among the most expensive of any stone in the world.

The brilliant red color of the ruby has given birth to a number of myths and legends. One is that rubies store vast quantities of heat and when placed in water, they will cause the water to boil. Obviously, this is an exaggeration, but some swear if you hold a ruby in your left hand, you'll feel bursts of heat. Ruby, none the less, is a powerful stone and has long been considered a magnet for prosperity, attracting abundance both materially and spiritually.

The word ruby is derived from the Latin rubeus, meaning "red".

Figure \(\PageIndex{1}\): Spectrum of ruby: both natural and synthetic

The chromium present in ruby causes a natural red fluorescence which is stimulated by both visible and invisible (ultraviolet) light. However, when a ruby contains a significant amount of iron in addition to the chromium, the fluorescence is reduced. Rubies naturally fluoresce stronger to long wave UV than short wave. Stones with the strongest fluorescence are often a pinkish red color in daylight.

The most famous source of fine rubies is Upper Burma, now known as Myanmar. The ruby mines of Myanmar are older than recorded history; Stone Age and Bronze Age mining tools have been found in the mining area of Mogok. Rubies from the legendary mines in Mogok often have a pure red color, which has been described as "pigeon's-blood" although that term is more fanciful than an actual practical standard in the trade today. Myanmar also produces intense pinkish red rubies which are almost electric in color. Many of the rubies from Burma have a strong fluorescence when exposed to ultraviolet rays like those in sunlight. Fine rubies are also found in Myanmar at Mong ('Maing') Hsu and at Nanyazeik (Namya).

Much lesser known are deposits of ruby found in Afghanistan. Although reports of rubies mined in Afghanistan were first chronicled by Marco Polo, the mines have long been shrouded in secrecy and mystery. The mines he referred to are for "balas rubies" (spinels). The actual locality is at Kuh-i-Lal in present-day Tajikistan, just opposite the Afghan border. True ruby is also mined in eastern Tajikistan at Snijnie (aka Snagnyi or Snezhnoye). 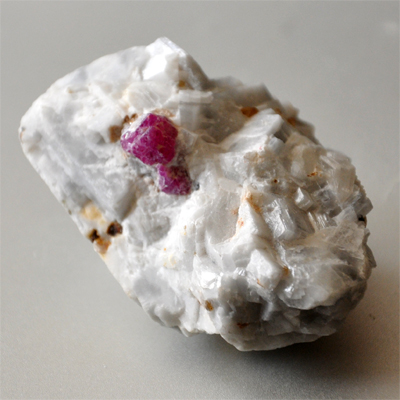 The crystal above is semi-translucent and heavily included. It can be described as a subhedral ruby crystal nestled in a matrix of white calcite/dolomite marble, dotted with pseudo-hexagonal books of muscovite. It is very strongly fluorescent displaying bright red with LWUV, and weaker red with SWUV.

True rubies are found in Afghanistan at Jegdalek, east of Kabul, which is located in a continental collision zone between the Asian and Indian plates. The deposits occur in metamorphosed limestone (marble) which are found on both plates.

Next to Myanmar, the most important historical source of ruby is Sri Lanka. In modern times, fine rubies have been found along the Thai/Cambodian border between Chanthaburi (Thailand) and Pailin (Cambodia). These deposits were the most important in the world between about 1965 and 1995. Today they are exhausted.

An additional source of ruby is Vietnam. Fine stones have been found at both Quy Chau (along the Lao border) and Yen Bai, north of Hanoi.

East Africa has been a major source of ruby since the 1960's, with a number of sources existing in Kenya, Tanzania, and Mozambique. In addition, Madagascar has a number of ruby deposits of varying importance.

Common enhancements to rubies include: