The flame fusion method (also known as the "Verneuil process") to grow synthetic gemstones was created in 1893 by Auguste Victor Louis Verneuil (1856-1913) as a means to grow synthetic corundum. In 1904 Verneuil shared his knowledge with the world in a publication in the French journal "Extrait des Annales de Chimie et de Physique" and his technique is still used today, either with or without slight adjustments, to grow a variety of synthetic gems as corundum. spinel, rutile and strontium titanite.
Due to the high polish, this synthetic corundum can take (and its relative high hardness) the produced crystals were, and still are, in high demand by the watchmaking industry. Either as bearings or as watch glasses. 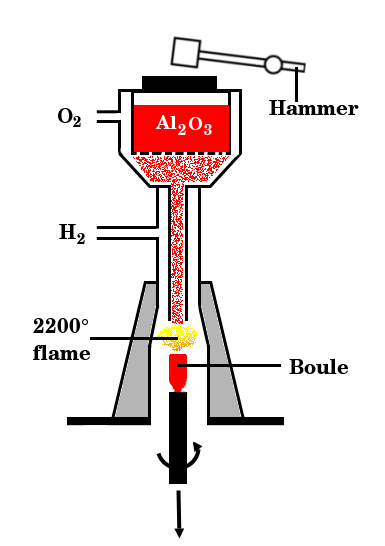 In order to grow synthetic corundum (or another mineral that is suitable), a feed of source powder is held in a container with a sieve-like floor. On tapping with a hammer, the container releases a certain amount of the powder that is fed into a chamber and mixed with compressed oxygen. One can compare this with tapping against a kitchen sieve to dose flour or powdered sugar.
The powder with the extra oxygen falls down into an ignited oxyhydrogen flame (at around 2200° C) and the feed powder starts to sinter onto a ceramic rod (named a "candle"). At first, the powder is allowed to create a "starter" mass on which the rest of the sintered powder will grow.
When the "starter" boule has formed, the rate at which the hammer hits the powder container is decreased and the oxygen/hydrogen mixture is adjusted to the most favorable circumstances. The ceramic candle is lowered from the flame at a constant rate to keep the top of the growing mass in the hottest part of the flame to let the boule grow.
Typical produced boules grow up to about 100mm in length and with a 20mm diameter (although they are not round in cross-section). The "candle" pedestal is lowered at a rate of 10mm/hour, thus a finished boule of 100mm in length would take 10 hours to create.

After growth, the boule is broken from the candle and parted lengthwise to relieve it from stress.

The name "boule" comes from the French word for swelling and refers to the ball-like appearance of the first results. A correlation with the French game "jeu de boules" (game of balls) is easily made. Nowadays the term "boule" is applied to the whole finished, cylindrical, product.

Although the technique sounds easy, it, in fact, requires careful control of all the steps involved, including temperatures and position of the boule.

It is estimated that 90% of the artificial production of synthetic corundum is done through the flame fusion method [Hughes, 1997].