The "skull-crucible" or "skull-melting" method is mainly used to create synthetic cubic zirconia (at least when it comes to synthesizing gemstones).
The "skull" part refers to the thin crust (or skull) of white zirconium dioxide that is formed around the crystallized core.

Although zirconia (ZrO2) occurs naturally, it is mainly monoclinic of nature and is known as baddeleyite. The cubic form, known as "arkelite" occurs sometimes in zircon. 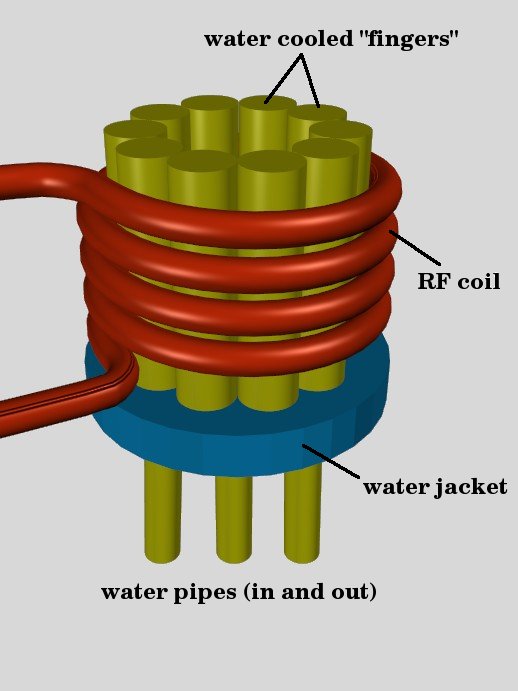 The synthesizing of cubic zirconia posed two main problems throughout the 20th century. The melting point of zirconium dioxide was so high (2750°C) that none of the usual crucibles (platinum etc) could withstand that heat. The other problem was that ZrO2 tends to crystallize as monoclinic crystals instead of in the cubic system.
The first barrier was taken by letting the zirconium dioxide powder form its own crucible (a skull) and the second by adding stabilizers as yttria (Y2O3) or calcium oxide (CaO). The mole percentage of the stabilizers varies from 10 to 30% (usually 15% for yttria and 10% for calcium oxide).

In order to create the high temperatures that are needed to melt zirconium oxide, radio-frequency (RF) waves are used. These have a frequency of about 4MHz with a voltage between 50 and 100kW (enough to power your favorite radio station). This RF induction only works on good electrical and thermal conductors, zirconium dioxide not being one of them. This is solved by placing a rod of zirconium metal in the center of the crucible (which will react and turn into cubic zirconia itself).

The zirconium metal and the zirconium dioxide source powder are placed inside the crucible (between the fingers) and the system is turned on. Water pipes provide a flow of cold water to the copper "fingers" that line the crucible, keeping the outer perimeters of the source powder cool (preventing it from melting).
The radio waves that pass through the copper RF coil heat up the zirconium metal which in turn heats up the surrounding powder. As this powder melts it becomes receptacle to the RF induction and in turn, melts its surrounding powder. This goes on until the powder that is close to the cooled fingers prevents it from melting.
The workings are similar to how a kitchen microwave oven works (but not the same).

After the induction, the melt is slowly lowered from the coil and the energy of the coil is adjusted in order to keep the melt between the coil at about 1400°C. During this slow lowering (ranging from 2 to 30mm/hour, depending on the composition of the melt) columnar crystals are formed and relieved from stress. With a furnace height of 200mm, this takes an average of 12 hours. When the total, now crystallized, mass reaches a temperature of 98°C, the melt with the surrounding "skull" is taken out of the furnace and left to cool in the open air, after which it is parted with a slight tap of a hammer.
A typical run needs 1 kilogram of powder and will yield 500 grams of gem material cubic zirconia.

As mentioned earlier, in order to prevent the molten mass to crystallize in the monoclinic system, a stabilizer is added to the melt. This can be either yttria or calcium oxide. Each of these two will give slight variations in optical and physical properties.

In addition to the stabilizers, other elements can be added as dopants to create colored crystals. Some of them are: cesium, chromium, iron, cobalt, neodymium, praseodymium, vanadium, copper and manganese.