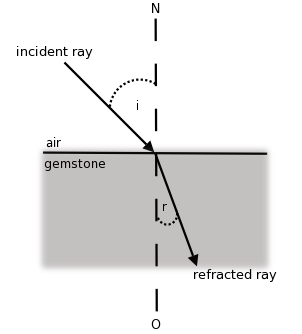 Refraction is the change of direction in which light travels as it passes from one substance to another that has a different optical density (as from air into a gemstone).

Optical density is a property that manifests itself in the slowing down of light, i.e. the higher the optical density, the lower the speed of light. This change in speed causes light to bend (refract), as can be seen when a spoon is put into a glass of water. Because light travels slower through water than air, the spoon appears to be bent. This bending of the light is referred to as refraction. Refraction of light as it passes from one medium to another can be calculated from Snell's Law. (see below).

In Fig.1, the angle of incidence is indicated with i and the angle of refraction by r. When light travels from air to an optically denser medium (like a gemstone), it will hit the surface at an angle to an imaginary line named the normal (NO). The normal is a line passing through the point of intersection that is perpendicular to the surface. It will then partially enter the stone (other parts will be reflected). Due to the slowing down of light inside the stone, it will bend (refract) towards the normal.

The opposite of this is also true. Light that travels from a gemstone into an optically rarer (or less dense) medium such as air will bend away from the normal. The angle at which light is now refracted out of the stone is the same as the angle of incidence, which means it will continue along the same path as on incidence (when it entered the stone).

A gemstone's index of refraction may depend upon the wavelength of incident light (wavelength may change as light enters the gem). Then, since different wavelengths of visible light correspond to different spectral colors, the refractive index may differ slightly for each spectral color.

In gemology, yellow light is used as the main source for measuring the refractive index of a gemstone. Yellow light was chosen because in the early days of gemology it was easily produced by salt (sodium) in a flame and was an inexpensive means of producing monochromatic light. The wavelength of sodium light lies at 589.6nm, known as the Fraunhofer D-line. When n is used to describe the index of refraction, we use nD to indicate the refractive index when measured with sodium light. This is commonly abbreviated as RI (refractive index).

The instrument of choice to obtain the refractive index of a gemstone is the refractometer.

The math behind Snell’s laws of refraction

Refraction follows the laws of Snell, which state that:

Explaining the causes of refraction is not an easy task, yet a pseudo-scientific approach is given below. It is based on two principles:

Velocity (V) of light is dependent on wavelength (λ) and frequency (f). Frequency is the number of crests that pass a given point in one second and is expressed in hertz (Hz).

The frequency of light is the same in every medium. This means that if the velocity of light changes, the wavelength must also change. As a consequence, light traveling from air into an optically denser medium will travel at shorter wavelengths inside that medium.

At the atomic level, an incident photon is absorbed and will make an electron cloud vibrate at the frequency of the wave and emit that energy in the form of a photon with a delay, which has a net result of slowing down. The emitted photon is newly created and thus is not the same photon that was absorbed. Since the electron cloud vibrates at the same frequency as the incident wave, the frequency of the emitted light wave will not be altered. In order to keep the equation intact, a drop in velocity must mean a decrease in wavelength.
Thus both the velocity and the wavelength of a light wave decrease when entering a denser medium.

The relationship between wavelength and speed of light

Light in air travels at approximately 300,000 km/second. When it enters an "optically denser medium", this light will slow down. The amount at which it slows is related to the index of refraction of that material.

Assuming the RI of the material = 2, then the light (coming from air) will be slowed down to 150,000 km/second, or half the speed of the light in air.

As there is also a direct relationship between the speed of light and wavelength, the wavelength will decrease as well. This means that a beam of red light (with a wavelength of about 700 nm) will travel at a wavelength of 350 nm inside the material with index of refraction = 2. As the frequency remains the same, the color of the light wave is not altered. 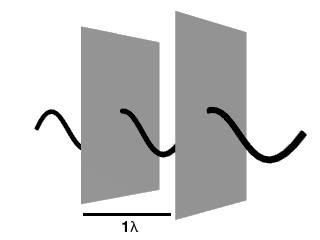 Figure \(\PageIndex{2}\) : Two wavefronts on a single wave, each one wavelength apart

Light propagates from a single source in all directions just like a pebble thrown into a pond creates waves around the center of impact. These waves (the wrinkles in the water) are at a certain distance from one another (wavelengths). The direction of propagation is perpendicular to the wave, and the wave itself is named a "wavefront".

Similar to waves in water, light also propagates in one direction with associated wavefronts. All of these wavefronts are at a distance of one wavelength apart.
Allochromatic light has an infinite amount of wavefronts, all at different distances depending on the wavelengths.

For a basic understanding, it is best to single out one light wave. 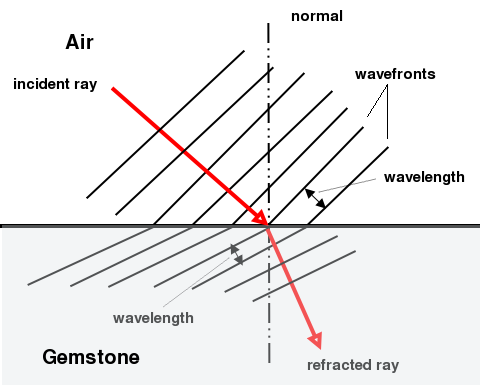 When light travels through air, it travels at a speed of approx. 300.000 km/second (actually, that is the speed in a vacuum). As it encounters an optically denser medium, light will be slowed down. This means the wavelength must shorten as well.
Thus the wavefronts of a particular light wave are closer together inside the denser medium (here, a gemstone) than they are in air. In order for the wavefront to stay intact, the wavefront must bend at the boundary between air and the gemstone (as illustrated on the left).

In the illustration, notice that the wavelength inside the gemstone (the distance between 2 wavefronts) is shorter than the original distances in air. Because the propagation of a light wave is perpendicular to the wavefront, the light wave must bend as well.

We as gemologists tend to associate color with wavelength and a logical conclusion could be that when the wavelength inside the mineral changes, so must the color of the light wave. However, our eyes and brains are sensitive to the frequency of the light wave instead of the wavelength. As the frequency isn't changed, neither is the color. Through a series of goniometric calculations, one can derive Snell's law from this.

As the index of refraction of air is 1, we could rewrite that as: