Polarization is a concept that is fairly easy to comprehend. It plays a key role in many concepts that are important to gemologists. Understanding the basics of polarization is vital in your studies. 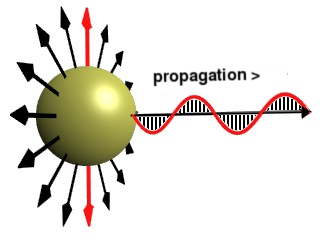 Light from the sun or a lightbulb is spherical, meaning that it transmits light in all directions.
If you were to follow one lightray in one direction (the direction of propagation), it would look like a circle with light being transmitted at an angle 90° to that direction. This is called transversal light. This transversal light is what is used as illustration for polarized light.

There are 3 causes of polarization, of which the first two are most relevant to gemology:

A polarization filter lets through only light which vibrates in one direction (depending upon its orientation).
Polarizing filters are manufactured so that only a specific wave of transversal light can pass through the filter. This has a wide range of uses, from sunglasses to conoscopy and many other applications. 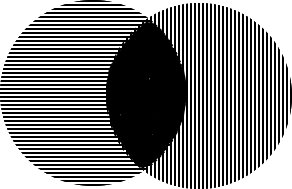 On the image on above the allowed pass-through directions are indicated by the black lines. The one on the left lets only light waves vibrating in the East-West direction pass through, while the one on the right allows only the waves that vibrate in the North-South direction to get through.
This must not be confused with a "venetian blind" or "picket fence" as that analogy is a very poor one and is incorrect (see wire grid polarizers).

When both filters are placed on top of each other (as indicated by the middle portion of the image), no light is able to pass through. This is because the first filter lets only the light that vibrates in the E-W direction to pass through and when that light reaches the second filter, it is not allowed to get through (because the second filter lets only the light vibrating in the N-S direction to pass through.
When two polarizers are set up this way, we named that "crossed polars" or "crossed polarizers", but not "crossed filters" as that is a different technique.

As you rotate the filter to other positions, other orientations will pass through. The produced light is what we call "plane polarized light", it only vibrates in one plane. 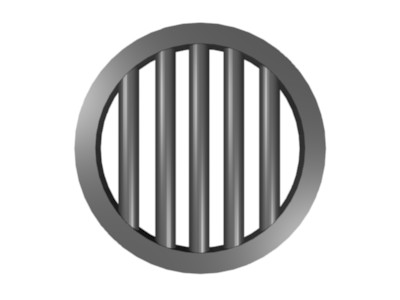 Wire grid polarizers are traditionally made from metal wires that are separated from each other at a certain distance. This distance is determined by the wavelength of the electromagnetic wave one wants to polarize. For visible light (with a wavelength between 700 and 400nm) the spacing is usually less than 200nm (0.2 microns).
When the spacing is increased, the filter starts to work as a diffraction grating. Plastic polarizers work in a similar fashion, the dichroic molecules are stretched creating a type of wire grid polarizer.

It needs to be understood that a ray of light (or any other electromagnetic wave) is polarized perpendicular to the direction of the wires. When the wires are orientated North-South, the electric component of the light will be polarized in the East-West vibrational direction. All other vibrational directions will be reflected or absorbed by the metal wires.
This is not very intuitive as more than often a "picket fence" or "venetian blind" analogy is used to describe the workings of a polarizer. In such an analogy it is described that the light vibrating in the direction of the open slits is allowed to pass through. That is, almost, correct for a venetian blind in a living room, but not when the spacing is less than the wavelength of the light. In fact, the venetian blinds let through unpolarized light (at least in the visible region). 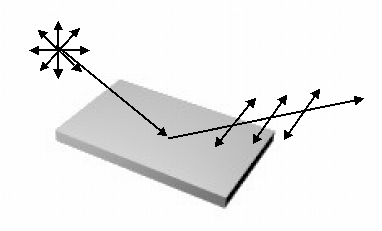 When unpolarized light enters an anistropic gemstone at an angle other than the optic axis, that light will be split into two polarized rays, vibrating at right angles to each other. This is due to the double refraction properties of anistropic materials. On exiting the gemstone, these two polarized lights will combine again as unpolarized.
However, in some minerals (such as tourmaline), one of these polarized rays is completely absorbed by the mineral. This means that only one of the polarized rays will exit the mineral, and that ray will remain polarized. The phenomenon of absorbing light that travels in a certain direction is named selective absorption. The effect it causes is named pleochroism.
The first polaroid filters made were created from small grains of the mineral herapathite, which exhibits the same properties as tourmaline.

Another way of separating the polarized rays to create polarized light outside a gemstone is by making use of the critical angle of a substance. In gemology, a device that does this is called a Nicol prism, and many textbooks still mention the use of "crossed nicols". A piece of Iceland spar (calcite) is cut in two at a diagonal to the c-axis and is then cemented back together with Canada balsam, with nD = 1.537. Ordinary white light enters the Nicol prism and is split in two rays -- a slow ray (ordinary ray) and a fast ray (extra-ordinary ray). The ordinary ray will undergo Total Internal Reflection when it reaches the balsam. The extra-ordinary ray will pass through the balsam and leave the prism, polarized, on the other end.