Brilliance is the degree of "brightness" of a gemstone, resulting from light reflected from and refracted off the crown and pavilion facets. Brilliance is an overall visual perception based on the physical laws of refraction and reflection. 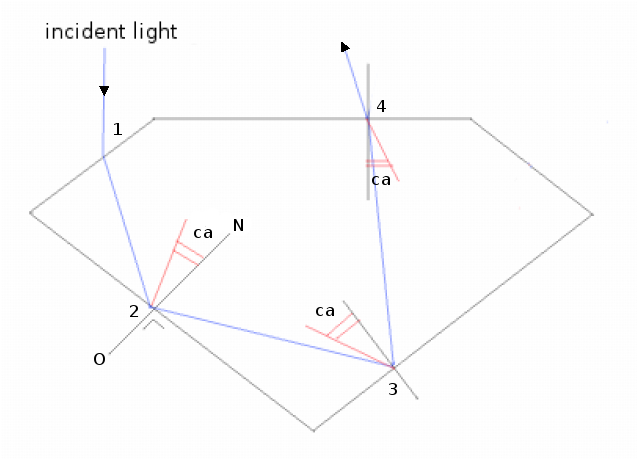 Figure \(\PageIndex{1}\): Total Internal Reflection in a Diamond. Light reaching the facet at an angle larger than the critical angle will be reflected.

When light hits the surface of a transparent optically denser medium (like a gemstone) it will be either reflected from the surface (bounced back) or partially refracted (bent and sent in another direction) inside the stone. When a light ray is refracted, it hits a pavilion facet and either is refracted out of the stone or reflected inside the stone depending on which angle the light ray approaches the facet (Fig.1, see its explanation below).

Explanation of Figure \(\PageIndex{1}\): In this example, a brilliant cut Diamond is shown, having a critical angle ("ca") of approximately 24°26' (24 degrees and 26 minutes). The path the light travels (the blue line) is as follows:

The critical angle is measured from an imaginary line named the normal (NO). This line is drawn at 90° to the surface of the facet at the point where the light reaches that facet.

In a well proportioned transparent stone, all light that enters the faceted stone through the crown will be trapped inside the stone for a while and then be refracted out of the stone through the crown. This behavior is known as Total Internal Reflection (often abbreviated as TIR) and it is the key ingredient in the design of a refractometer. It should be noted that this unique phenomenon only occurs on the boundaries of an optically denser medium (gemstone) and an optically rarer medium (such as air) when light travels inside the denser medium.

Of course, in colored gemstones, other factors such as color zoning, pleochroism, etc also play a role in deciding how a stone needs to be cut for best optical performance. 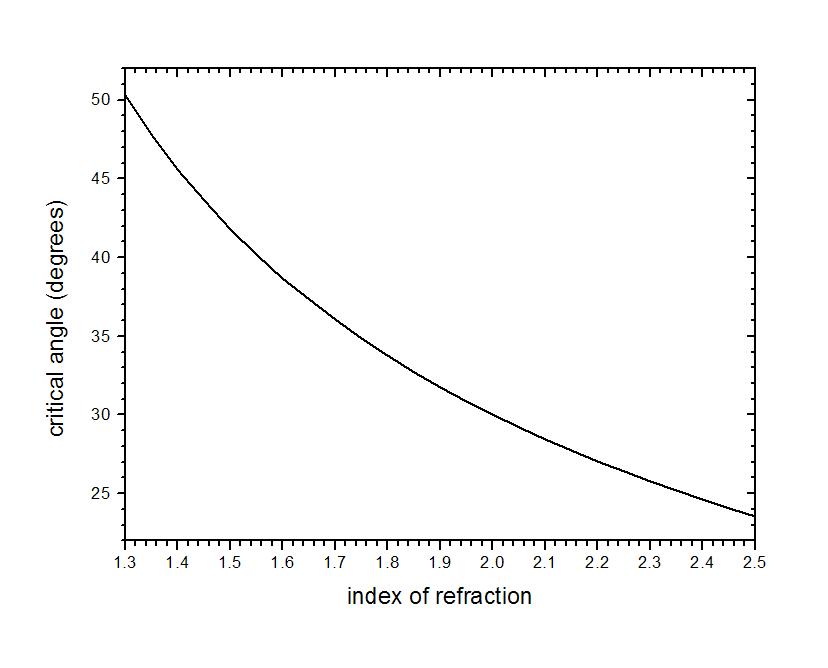 Figure \(\PageIndex{2}\): Relationship between critical angle and index of refraction

Note: the actual formula is arcsin(n2 / n1), but as we gemologists usually are only concerned with the critical angle between air and the gem, n2 = 1.