This essay is largely based on Richard Feynman's book "QED - The Strange Behavior of Light and Matter" and his lectures in Auckland, New Zealand. The first being the written version of the many lectures held by Feynman at universities around the world in the 1970' and 1980's.

Quantum electrodynamics is a topic not very well understood by gemologists (or even by physic majors), but with the simple concept of "adding arrows" the strange behavior of light can, at least partially, be explained. Nobel Prize winner Richard Feynman had the ability to teach hardcore quantum theory at a novice level maybe only to be surpassed by Walter Lewin. Throughout everything Feynman freely admits that some things just can not be explained at present, nor that anything he lectured is correct. In 10 years we might have much more insight in the strange behavior of light, but at present we will have to do with empirical knowledge and our limited understanding.

The main objective of this essay is therefore not to be authoritative or correct, just to dive a little deeper in the topic of light so we may understand how light works. From why light doesn't travel in a straight line to how diffraction works, it can all be explained by the simple concept of "adding arrows".

When a light source is pointed at a reflecting surface, we are taught that the reflection will reach a point on the opposite of the normal and that the angles of incidence and the angle of reflection are equal. The incident ray, the reflected ray and the normal all lie in the same plane. That is the "law of reflection". A logical interpretation of that might be that light will always follow that path of least distance (or even least time). That raises a few questions, as how much of the light will be reflected from the glass plate. Or if we would paint a portion of the glass black, would it still be able to reflect light from light source A to detector point B? According to the usual law of reflection, the latter should not occur. In reality, it could reflect more. 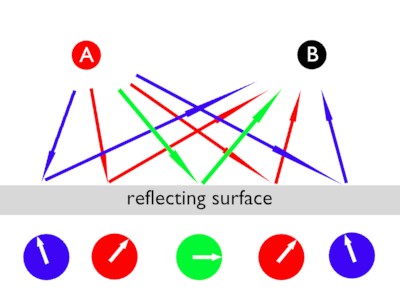 Figure \(\PageIndex{1}\): Possible paths light can take when traveling from point A to point B via a reflecting surface

For us to understand this, we need to let go of the idea that light travels only in a straight line from A to B or that there is only one path a light ray can take to get from A to B, via a reflecting surface, when the shortest path between A and B is blocked.

When a photon travels from point A to point B via a reflecting surface, it can take an infinite amount of paths to reach B. The shortest possible route being dictated by the law of reflection (depicted as the green arrows). However there is no reason why the photon could not take a longer path, and in fact, it does. It could easily follow the red paths (which are longer paths) or the blue paths (even longer) or anything in between. If we were to place a detector at point B and measure the time it takes to get from point A to B via the reflecting glass, the time for every photon to arrive at point B will be different. A good indicator that light does not always travel the shortest distance.

If we were to take a stopwatch with counter-clockwise rotating hand, the hand would stop at a different "hour" for each of these paths and we can think of the direction the hand is pointing to as an "arrow" (as indicated at the bottom of the image).
The lengths of the arrows are arbitrary and the same for every stopwatch.
The arrows are known by physicists as "phasors" and the direction in which they point is referred to as the "phase angle". 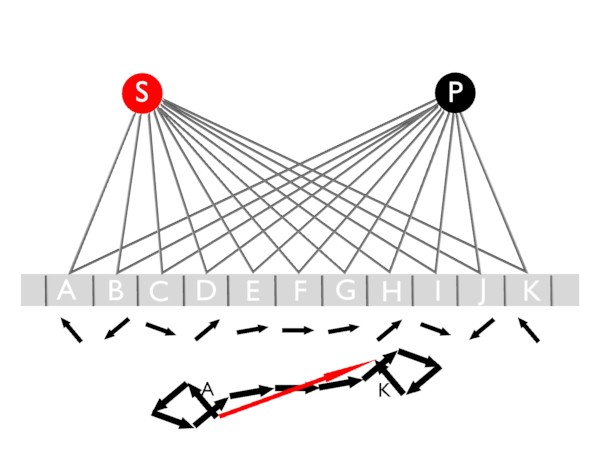 Figure \(\PageIndex{2}\): Close up of reflection on different spots of a mirror with arrows and the adding of arrows

We could divide the reflecting surface into small portions (an infinite amount) and calculate the time it takes for a photon to get from source S to a detector P (P for photomultiplier). The stopwatch (with a very fast rotating hand) is started when the photon is emitted at S and stopped when it is detected at P.
Although the mirror can be divided into an infinite amount of small sections, for simplicity only 11 are drawn (from A through K). The small arrows below the sections represent the directions that the stopwatch hand is pointing at when the experiment is done.

We then start "adding the arrows", starting with arrow A. We do that by placing arrow B with its tail on the head of arrow A (without changing the direction of the arrow). Arrow C will be placed with its tail on the head of arrow B and so forth until we get a snake-like figure of arrows.
We then draw a final arrow that starts at the tail of A and ends at the head of arrow K (seen as the red arrow). This final arrow is the amplitude of all the photons that are reflected from the mirror.
As can be seen in the image, the sections E, F and G contribute the most to the final arrow. While the reflection in the outer regions of the mirror tend to detract from the final arrow. This means that the amount of reflection of a mirror is largely due to reflections around the centerpoint (F), and not of the centerpoint alone as we learned in the classical view of reflection.

As can be seen from the arrows, the sections A and B are causing the final arrow to be shorter and in fact interfere with the final amount of reflection. One could ask oneself, what would happen when we could get rid of one of those interfering arrows. One way of doing that is by making that section not reflect, for instance by painting it with a non-reflecting paint. 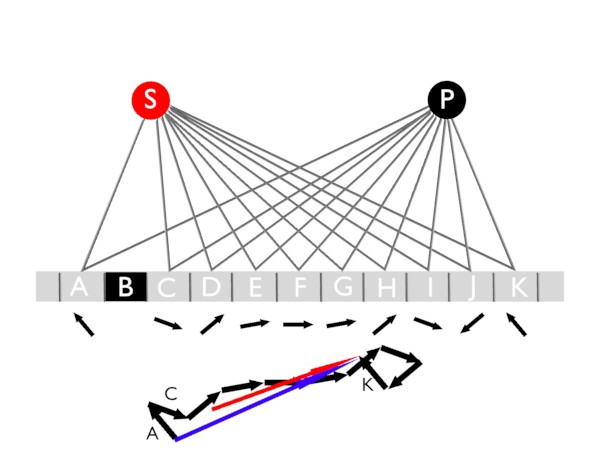 Figure \(\PageIndex{3}\): Removing a reflection section can add to the total reflection

When we take away the reflection of a particular section, we also take away the arrow (as there is no reason to time the reflection on a non-reflecting surface). This means that the adding of the arrows will now change. As we removed the arrow that belonged to section B, we now must place the arrow from C on the arrow of A.
This results in a longer final arrow (from A to K) as seen in the image as a blue arrow (the original red arrow is left in to show the difference). This means that by removing a specific section of the mirror (by making that part non-reflecting), the total reflection of the mirror can be increased. Strange but true.

As always, there is no such thing as a free lunch and there is a catch. The removed section needs to be very small, a strip of about 1/1000th of a millimeter, and a sequence of those small strips will only reflect monochromatic light.
An added, and not anticipated, bonus is that if you move the detector, it will reflect another color of the visible spectrum. Thus that part of the mirror is now working as a diffraction grating. 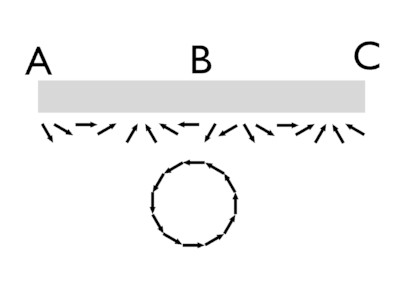 A close up of section A, B and C (the outer perimeters of the mirror) shows that many photos of light hit a specific area. One can draw in as many as one likes. All of them will need a different time to get to the detector and thus all will have a specific arrow associated with them. The area A to C shows arrows that interfere with each other, in effect canceling each other out and that region will therefore not contribute to the final amount of reflection of the whole mirror. When the arrows of that region are added (heads to tails) they form a circle or a spiral of arrows.

When one would make the areas that are detracting from the total reflection, i.e. the arrows who are pointing in the "wrong" way, non-reflecting then the overall reflectivity of the mirror will increase. 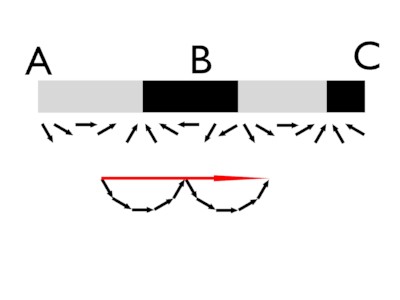 Figure \(\PageIndex{5}\): Increased reflectivity after adding of the arrows, diffraction

Of course, the spaces between the reflecting and non-reflecting parts (named "grooves" in a diffraction grating material) are very closely spaced.

As mentioned earlier, the reflection on the grooves only works for monochromatic light, like red light, because the stopwatch for blue light spins faster than for red light (so the arrows would point in a different direction for blue light). However if one would move the detector, it works again for blue light (but not for red light).
If our eye is the detector, then it could work for both blue and red light (and everything in between) because our eye has a wide view and acts like many detectors at different places.