Reflection is the return by a surface of some of the light which falls on that surface. (Other parts get absorbed or refracted).

There are two main laws (called "the laws of reflection") that play a role in this: 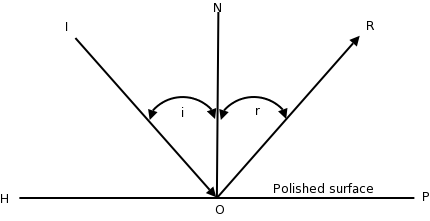 Understanding these basic principles are important in order to understand the many gemological terms that are used to describe optical effects caused by reflection.

Amongst those effects are:

For light that is incident close to the normal (to about 10°), the amount of reflection can be calculated by the Fresnel equation for reflectivity.

For light traveling from air to diamond that translates to:

In 1812, Sir David Brewster (1781-1868) described a new phenomenon of light. He found that, when light falls on an optically denser object (like water) at a certain angle, the reflected component of the unpolarized light will be completely polarized in the plane of the surface off which it reflects. In the case of water, it would be the horizontal plane.

He also observed that the angle of the refracted ray was at 90° to the reflected ray (at this specific angle).

This angle is named The Brewster Angle. It varies for every two materials that are in contact, relating to the refractive indices of the materials. 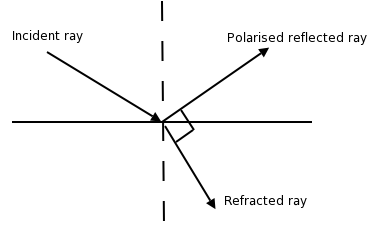 When the refractive indices of both materials are known, one can calculate the Brewster angle.

\[\arctan \theta_B = \frac {n_2}{n_1}\] (where Θ B is the angle between the incident ray and the normal). The latter makes it possible to use reflection as an aid to determine the refractive index of polished stones.

As the reflected ray is completely polarized in the horizontal plane at that specific angle, one could insert a vertically oriented polarizing filter to block all the reflected light (similar to how sunglasses work). By measuring the angle of the incident light, at which point no light passes through the polarizing filter, one may calculate the refractive index.

If one were to use monochromatic light that is polarized in the vertical plane, there would be no need for a horizontal orientated polarization filter as at the Brewster Angle that light will not be reflected. This is the principle of "The Brewster Angle Meter" developed by Peter Read.